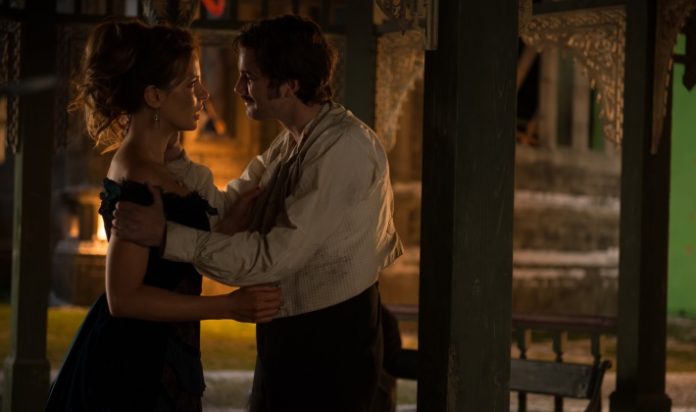 Without question we are fans of director Brad Anderson here at the Blog, even if he’s spent more time on thrillers and genre TV of late than our beloved horror genre. However, his one-two punch of Session 9 and The Machinist proved he was a man with an eye and ear for the unsettling, something visible throughout his work since (Transsiberian, Vanishing on 7th Street, The Call).

So when we hear he’s got a new spookfest in U.K. cinemas April 24th, we take notice, especially when it takes him back to an asylum courtesy of an Edgar Allen Poe short and one heck of a cast:  Michael Caine AND Ben Kingsley alongside Kate Beckinsale, Jim Sturgess, David Thewlis, Brendan Gleeson and Jason Flemying! Check out the trailer below; full text of the press release follows.

Featuring a stellar British cast including Kate Beckinsale, Jim Sturgess, David Thewlis, Brendan Gleeson, Jason Flemyng, Academy Award® Winner Sir Ben Kingsley and two‐time Academy Award® Winner Sir Michael Caine and directed by Brad Anderson (The Machinist, Transsiberian) STONEHEARST ASYLUM is a gothic psychological thriller based on a short story by Edgar Allen Poe. When Edward (Sturgess), a young doctor fresh out of college, arrives at Stonehearst Asylum in search of an apprentice position, he is warmly welcomed by the superintendent, Dr Lamb (Kingsley) and his “staff”, including Finn (Thewlis) and a mesmerising woman by the name of Eliza Graves (Beckinsale). Edward is intrigued by Lamb’s modern methods until a series of unusual events lead him to make a horrifying discovery, exposing Lamb’s utopia and proving that no-one is who or what they appear to be. STONEHEARST ASYLUM will be released across cinemas nationwide, video-on-demand and download to own on April 24th 2015