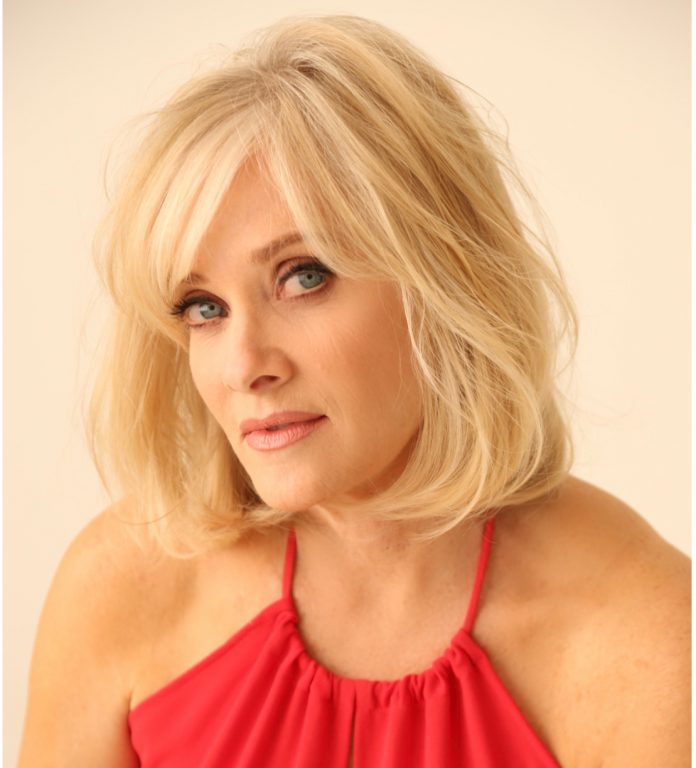 Ahead of Horror Channel’s UK TV premiere of Julian Richards’ REBORN, on Sat 22 August, actress, producer and genre icon Barbara Crampton reflects on how You’re Next changed the direction of her career, the joy of discovering new talent and the possibility of directing one day…
Talk about art imitating real life! REBORN is about a B-Movie actress trying to get back in the game after a career rough patch. Is that what you responded to in the script?

That was certainly something I could relate to. As I hit my late 30’s, jobs started to dry up and the phone didn’t ring as often. I was married around that time and my husband convinced me to move to San Francisco as he was being transferred with his work. I honestly thought I was leaving Hollywood and the film business behind. I wasn’t sad as much as I looked forward to a new adventure with my husband and hoping for the children who came very quickly. I felt that perhaps I had already made my mark in RE-ANIMATOR and FROM BEYOND and that would be that. About six years later, I received a call out of the blue to appear as the mom in YOU’RE NEXT. I did it as a lark, for fun, not knowing the filmmakers or their wild talent and not realizing the new path that special film would put me on. I feel like my character in REBORN was ME hoping to get a part for many years and then being fortunate enough to be offered a stellar film like YOU”RE NEXT. That would be akin to the role my character In REBORN receives from Peter Bogdanovich. So in reality, what happens to Lena in the film happened to me.

Although director Julian Richards had you in mind for the part of Lena O’Neill early on, you were actually cast right at the very last minute. Was that jumping in with virtually no time to prepare a difficult challenge?

Another wonderful actress was cast before me even though Julian had me in mind at the outset. Sometimes casting takes place by committee and not everyone gets their first pick. The other gal wasn’t able to do the part after all and so I was called in with about 48 hours notice. It was a bit harrowing. I read the script once, packed up my car and drove down to LA within 24 hours. I knew many of the people on the film so I really leaned in for advice from our DP Brian Sowell, who also worked on BEYOND THE GATES, Michael Pare who I’d worked on PUPPET MASTER: The Littliest Reich with and the effervescent Rae Dawn Chong, whom I didn’t know, but became a close and trusted ally on set. Julian And I know each other well and he trusted me and I appreciated his gentle care in guiding me along on the role. We filmed many scenes in Brian Yuzna’s house, which doubled for my character’s residence and it was warm and welcoming to see him shuffling about in his slippers during our filming.

CARRIE and FRANKENSTEIN are the obvious inspirations for REBORN. Did you see any other resonances in the script you wanted to draw attention to?

As far as the character of Tess is concerned those two films are apt references. For me and from the perspective of my character, the film is about regret and second chances and what gets in your way, if you let it. Lena is held back by something in her past. She’s haunted by the death of her daughter and she just can’t move forward. She’s stuck both in both her head and heart. I actually looked at REBECCA 1940, as the leading character played by Joan Fontaine is stuck by the overwhelming shadow of her new husband’s deceased wife. I also used aspects of IT’S A WONDERFUL LIFE. Jimmy Stewart as George Bailey is so consumed by his life, he can’t see the goodness of what’s right in front of him. Of course I always use myself. How would I feel if I were in the same circumstances as my character? My own children mean the world to me and if I’d lost one…. That thought are pretty devastating.

You shot a lot of the movie in Brian Yuzna’s house, the producer of your horror breakthrough REANIMATOR. Did you ask him for that favour? Are all the framed movie posters a fixture in his house or just there to help your character’s back-story?

I believe John Penny, our producer, asked Brian if we could use his house. It’s right off Hollywood Boulevard and it has a lot of old world charm and glamour. Perfect for Lena’s house. Pretty much all the posters you see on the wall belong to Brian and some of the items reflect movies we’ve done together so it was perfect!

What an incredible cast, some you worked with before; Chaz Bono, Michael Pare (PUPPETMASTER: THE THIRD REICH, Rae Dawn Chong, Monte Markham (WE ARE STILL HERE) and more! Is a prior connection a blessing or a curse?

It’s always a blessing unless you didn’t get along with someone! I started my career working with Jeffrey Combs, made 4 projects with him. The familiarity you have with someone always bleeds into the work and there’s a comfort, especially on indie horror where you’re working very quickly. I very much enjoy working with people I know and trust. It was a joy to work with the legend Monte Markham once more. Meeting Chaz Bono was fun, as he is so excited and passionate about the work, although we didn’t have any scenes together. I do love working with new people as well. I feel like I learn something from just about everyone I work with and I am able to collect may new friends along the way.

Did you ever expect to get so busy post YOU’RE NEXT?

No! I thought it would be just a brief return to acting and that would be that. Yet, I had such a great time performing again, I knew I had to return to working if I could. I actively sought out more roles, hired a manager and became reacquainted with my agent. After I did SUNCHOKE, ROAD GAMES and WE ARE STILL HERE, I felt like people knew me again, that I was serious and committed to a second round of my career. People then started to call me. In the last few years, I’ve also been working as a producer and I can easily say I’m more excited about this business than ever! I don’t intend to slow down.

Your career resurgence has been one of the greatest and most gratifying aspects of the current genre scene. What do you see as the main differences between working with Stuart Gordon etc in the 1980s heyday as opposed to now?

There’s more being made. It’s wider field and the kids today know more about all aspects of film making then in the 80’s We all stayed in our lanes then: Director, actor, producer. But many wear more than one hat today and it’s easier and more accessible to be able to go out and make something without a studio. The emergence of smaller film festivals has allowed new filmmakers to find an outlet for their art to be showcased and network with other like-minded creatives. A young filmmaker can get noticed and make a name for themselves through these fests. Hopefully they can parlay that into working on bigger material.
Is directing something you would like to try? If so, what sort of horror subject would attract you the most?

You really need to make a commitment to one project for at least a whole year and while the idea is intriguing to me to direct, I have so many other projects I’m developing as a producer and have the occasional acting gig and so it would be hard to fit in directing a feature. However, I would love to direct a short and I’m keeping my eye out for material for that possibility.

As the First Lady of FrightFest, what value do you see in the global genre festival circuit of which you have become so much a beloved part?

These fests are the lifeblood of independent genre cinema. All these global fests and the talented programmers who run them are like grand hosts who introduce the world to fresh and new voices. They are the biggest champions to new filmmakers, many of whom prove themselves to be so gifted, they are invited back again and again. Without them, how who we meet these new talents? The audiences love to watch new films and studios and distributors send scouts to check out emerging talent at film fests across the globe. Also, I am able to meet many genre loving and passionate cinephiles and the fest circuit is really so much fun! Movies, panels, karaoke, contests, celebrations!

Finally, what’s next for you?

I produced and starred in JAKOB’S WIFE, which we finished filming right before the covid-19 shutdown. We are currently in post and it will be available sometime in 2021. I’m working hard on developing three other features and one TV show. Hope to see you all again soon in the flesh with hugs and love…