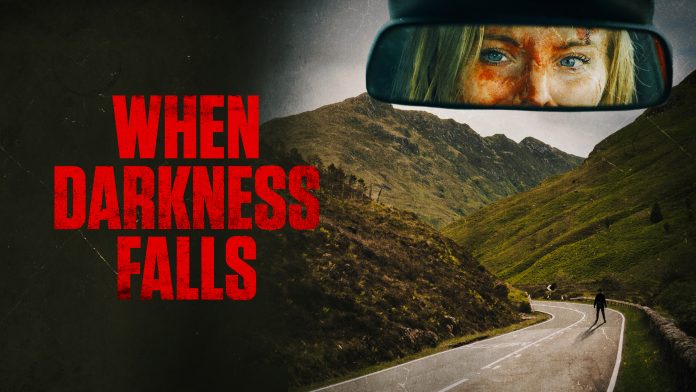 When you are watching films as a critic how do you compare a film that has been shot for a few thousand pounds and one that has had possibly millions thrown at it — especially when it comes to the ‘short-hand’ of a star rating. The truth is you can’t, so for me ultimately the bottom line is did I enjoy the film in and of itself and did it achieve some or all of what it set out to do.

Such a case in point is When Darkness Falls — a film that was made on a meagre budget but still managed to impress.

With a starting off point of the 70s Brian Clemens/TerryNation thriller And Soon the Darkness (as acknowledged in the interview below) this opens with a bit of business establishing our villains of the piece — Nate (played by director Nathan Shepke) and Tommy (Craig McEwan).

We then meet Americans Andrea (Emma O’Hara) and Jess (Michaela Longden, Book of Monsters). Passing friends in high school they have recently reconnected and decided to trek across the Highlands of Scotland. What could possibly go wrong being in the middle of nowhere?

Stopping off at a pub for refreshment our ladies meet our miscreants — Andrea is well up for a bit of fun, whereas Jess is less enamoured and decides to walk ahead to their next meeting point… big mistake! Followed by Tommy, he is thankfully scared off by handy ex-copper Beck (Ben Brinicombe).

Jess becomes increasingly concerned when Andrea doesn’t appear and ventures back to the watering hole convinced Andrea has gone missing. She meets Beck again but he is of no help, so she decides to look for her friend on her own.

Thus is set up a plot which takes some great twists and unexpected turns which keep you guessing as to what is actually going on. Before long somebody has been fatally stabbed, a bag of purloined money has gone missing, another girl is dead and things are turned on their head with uneasy alliances struck in a quest to find Andrea. But who do you trust?

Allowing for budgetary considerations this is a good solid thriller ably helmed by Nathan Shepka — who also created the original story which Tom Jolliffe (The Witches of Amityville) scripted. Shepka also edited the film and probably made the tea as well! Michaela Longdon is great in the central role and Shepka (him again) makes for a suitably nasty scoundrel. Also notable is Brinicombe, who may not be all he seems. There is excellent use of the bleak location which adds production value, though maybe the drone footage could have done with some judicious trimming. One also has to forgive some wobbly accents and slightly amateurish acting but overall this is slow burn but effective story leading to a full-on gore fest in the finale!

How long did it take from writing the script to getting the film made?
When Darkness Falls was actually conceived during lockdown. Myself and writer Tom Jolliffe were looking around for an idea for a tense thriller, old school in style, with smatterings of Hitchcock meets 80’s Brian De Palma (no I didn’t just compare us to two greats!) The film is actually inspired by a 1970’s British thriller called And Soon the Darkness, but instead of two British girls cycling in rural France, we flipped it to two American girls hiking in rural Scotland. Ours does get much crazier towards the end though, compared to the film that inspired it!
Because we were in lockdown at the time, productivity for us was up! And so we started putting the film together in April and by the September we were on set shooting it. Tom and I both have similar “artistic visions” if you want to call them that, so the writing process was pretty easy and we always seem to be on the same page (pun intended).

What was the budget?
Only around £10,000. We had the luxury of the set essentially being on our doorstep. The film was shot in the highest village in Scotland, which is only about a 40 minute drive from me. We rented two cottages that also doubled as locations and we got up in the morning, opened the front door and we were on set. So all that helps to keep costs down. Due to Covid, we bubbled on set and shot back-to-back for an initial 12 days, with a further pick-up day in the November. Hopefully though the production values still look good despite the low budget. We’re all about putting the money on screen!

How was the money raised?
Simple answer to this one: straight out of my bank account! Lockdown helped curb any wild partying or eating at nice restaurants or going on holiday for an extended period of time so I found myself with enough money to make a film. Every cloud and all that…

What’s next for you filmmaking wise?
We’re currently working on a sequel to our first feature film, Holiday Monday (just released on August 29th as The Bank Holiday Job in the UK) which is an old-school action shoot-em-up with fistfights and all the usual. The sequel I think is going to be great fun and kind of plays up to the current trend of nostalgia in cinema. After that we’re due to start work on a really dark crime thriller, which will be a bit of a departure for us. And Tom and I are looking at putting together another project for mid next year potentially. Something along the lines of When Darkness Falls but breaching the horror genre a little more.

How did you get into directing (and all your other roles – producer, editor, making the tea)?
I started out making short films and by number 5 I decided I’d like to have a go at directing as well as producing and “acting” in them. I think it is a bit of a natural progression because if you write the script, it’s a chance to take your vision through from concept to completion and I felt that other directors weren’t quite hitting the mark or translating the material particularly well to screen. Now that could have been the quality of said writing, but I think when you write something you have a particular vision in mind and it’s good to be able to continue that onto set and then into post in order to see it through. Sometimes multiple visions can muddy the waters, especially when someone interprets the material differently. I’m all for collaboration though. I won’t pretend that what we make is high art though, Holiday Monday is just simple entertainment. When Darkness Falls takes a bit of a leap into something slightly more artistic I feel though. Also, I apparently make a “sh*t hot” cup of tea so that’s accurate.

How did you cast the film?
This was a bit of a different process compared to usual. Doing short films for such a long time I’d built up a bit of a network of actors that I liked, that were reliable and committed and good to work with. When Darkness Falls though was a departure in terms of content and also in terms of the roles we had to fill. Action films tend to be quite male-centric but When Darkness Falls has two female leads. Aside from a couple of cast members I’d known for years, I didn’t have anyone in my little black book to fill the majority of the roles so that ended up being a casting call on various different sites and social media feeds. Tom helped massively with that as well in terms of screening potential candidates. I think we really struck gold with Michaela and Emma as the leads, their chemistry is pretty great in the film I felt and they became good friends off the set too, which always helps. Ben who plays Beck was great too, as well as being physically imposing he’s got a real undercurrent of danger. Craig and Tony round off the rest of the cast, both of whom I knew. Craig I’ve worked with a few times and is a bit of a chameleon when it comes to acting, the way he can switch between different roles. Tony is a well known face on the Scottish film scene and I thought it was about time I worked with him. And Niamh we also found via casting call! Small cast, but we all got on great and spending the entire shoot together in a holiday home environment meant that it was much easier to gel rather than turning up to set each day and going home each night.

How was it directing and acting at the same time?
I’ve always enjoyed it. I’m stepping back for the next film in order to let me concentrate on performance as it is a real challenging character and again, a bit of a departure. However up until this point I’ve enjoyed the challenge. I suppose the only downside can be is that you slip into the habit of watching all the performances as well as trying to act yourself and that can occasionally result in going behind the camera to check the take, realising everyone else is en pointe but going “what the f*ck am I doing there” kind of thing. The bane of multi-tasking! They do say men are no good at it…