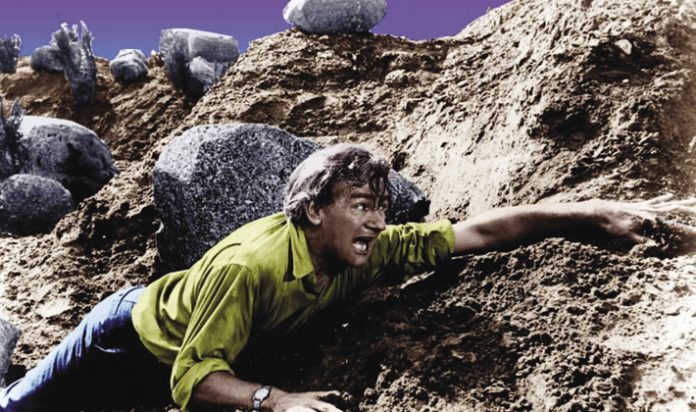 The science fiction film ‘boom’ of the 1950s, with its menagerie of gigantic creatures, had given Hollywood a shot in the arm in its fight against the one-eyed monster whose appearance in living rooms across the nation had been emptying theatres on almost an exponential basis: television. American TV could offer nothing to compete with the plethora of ‘It’s, ‘Thing’s and ‘Them’s which desperate producers conjured out of atomic furnaces or the deeps of space as fast as their special effects units could realise them, the best of which – It Came from Outer Space; The Creature from the Black Lagoon – were also showcased in the date-friendly attraction of 3-D. Science fiction was followed by horror, often-times both in the same package, because the cinema also retained the distinction of paid admission, which allowed films to explore territory barred to the child-friendly universality of television – a notion that was embraced with both hands by British producers, who suddenly latched onto the commercial potential in the BBFC’s ‘X’ (for Adults Only) certificate, which had been instituted originally to protect children from inappropriate material but was coming instead to mean ‘forbidden fruit’ for any viewer over 16 years of age.