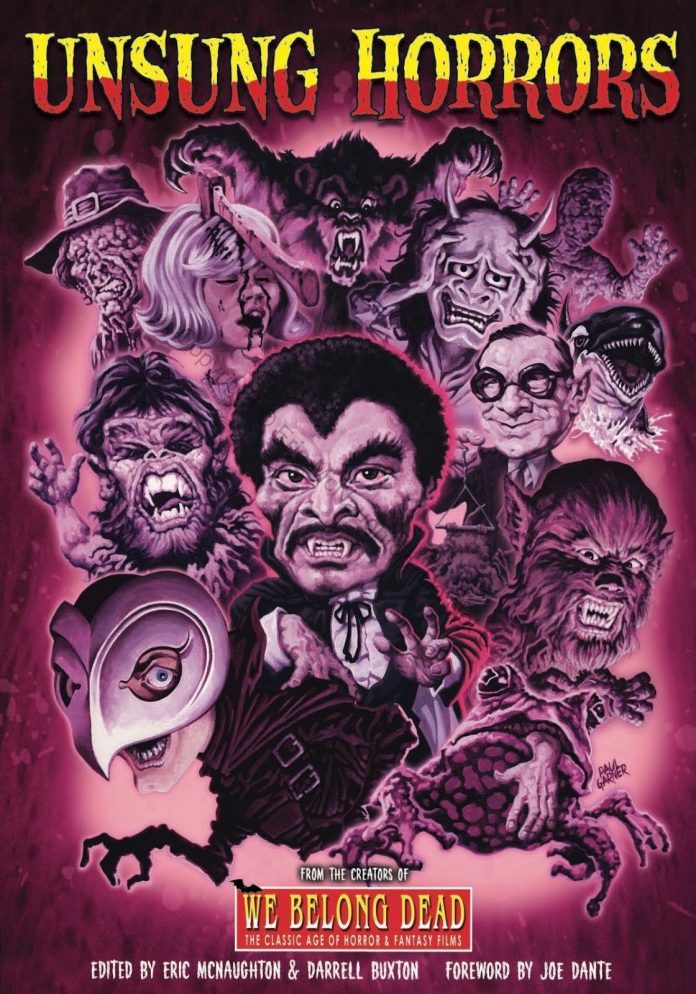 Things have been getting tougher for the genre press of late, particularly in America, where legendary mags like Fangoria, Famous Monsters of Filmland and Video Watchdog have all bitten the dust, printwise at least. Over in the UK though, print seems to be flourishing. In its 26th year, The Dark Side is doing more sales than it ever has, and it seems we are in a new golden era of horror film books too, with some amazing titles joining our recent Amicus tome to compete for a place on your creepy Christmas list.

As a publisher myself, I know the financial risks in putting out a decent quality book. Aside from paying an author and designer, the print costs can be mouth-watering. They were on our 168-page Amicus book so goodness knows what We Belong Dead publisher Eric McNaughton wedged out to produce the 450-page full colour doorstopping beast that is Unsung Heroes!

Those of you who were lucky enough to snap up a copy of Eric’s Monster Memories will know what to expect here – pages and pages and pages of lurid loveliness, packed with amazing pictures and informative text filled with friendly enthusiasm for our favourite subject.

Let’s get the small quibbles out of the way first, and they really are tiny ones. First of all the title. Unsung, really? Most of these Unsung Horrors will have had more than a few arias devoted to them by the target readership. Secondly, it’s a shame that the movies weren’t placed in alphabetical order to make it easier to look for any favourites. Aside from that, this is easily the film book of the year for me – I’m too close to Amicus to nominate that!

Opening with a fun foreword from beloved genre figure Joe Dante, who aptly describes books like this as ‘movie comfort food’, it also has a refreshingly intimate intro from Editor/Publisher Eric McNaughton, who has had a tough year as his friends know. He dedicates the book to the late Richard Gladman, a British genre buff who died at a tragically young age. Rick was a fine fella and would have loved this book.

Now it is going to be impossible for me to cover every single film reviewed within, but I can tell you the list ranges from obscure gialli (Seven Dead In The Cat’s Eye) to William Castle obscurities (Bug) to unsung British horrors (Craze, It, The Frozen Dead), to really unknown pics like The Lake of Dracula and Harold Hoffman’s The Black Cat, famously showcased in Denis Gifford’s A Pictorial History of Horror Movies.

You’ll also find features on the likes of Blood and Roses, Onibaba, Tod Slaughter’s Face At The Window, Murders In The Zoo, Equinox, House of Mystery, Seven Footprint To Satan, Dracula Pere Et Fils… the list goes on and on. Now let’s get to the writers. They all seem to know their stuff and it’s particularly gratifying for me to see how many of them also subscribe to The Dark Side – I recognised so many of the names! There’s even at least one regular DS contributor involved – good old Neil Pettigrew, who weighs in on The Sphinx, a vintage creaky starring his favourite poster boy Lionel Atwill.

What I love about most of the pieces is their typically British sense of humour, something I try to put across in The Dark Side. Martin Dallard says his gast has never been quite so flabbered by The Mystery of the Mary Celeste and Steve Gerrard suggests that Les Raisins De La Mort isn’t exactly vintage Rollin, more a table wine. Plenty more stuff like this had me chuckling away but there is so much to read here I will be on it until Christmas.

Special mention also should go to Darrell Buxton, who supplies some highly entertaining pieces and assisted Eric in the editing of the book, and big applause to Eric’s secret weapon, designer Steve Kirkham, who makes every spread a new feast for the eyes. Be sure to snap this up. It’s a bargain at any price and I am sure that Richard Gladman is looking down and smiling – with Denis Gifford nodding approvingly too.