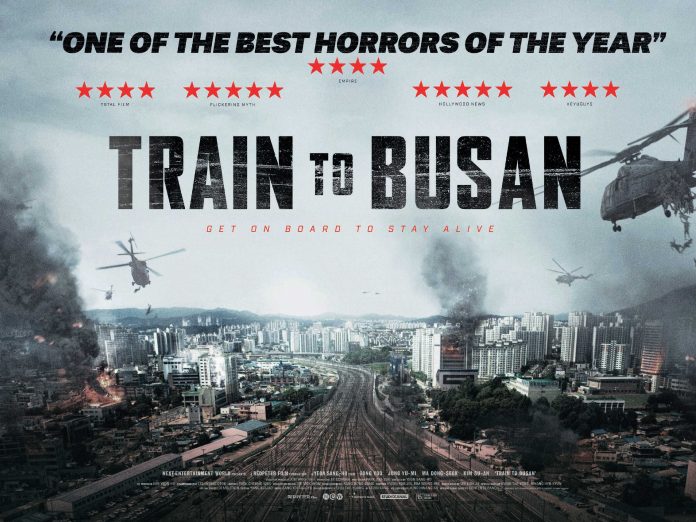 If you think that rush hour is bad here, wait until you see what it is like in South Korea. Train To Busan is a great movie, even though I prefer my zombies to amble along like glassy-eyed drunks.

In cinemas from Friday 28th October 2016

A father and daughter fight for their lives on a train full of zombies, in this Cannes Midnight Movie sensation, a truly astounding, action-packed thrill-ride from South Korea with social bite, an unexpected emotional punch, and a carriage- load of first class action.

A mysterious viral outbreak pushes Korea into a state of emergency. The government declares martial law just as divorced Seok-woo and his daughter catch the KTX bullet train from Seoul to Busan to see her mother. But someone on the journey has been recently infected sending the hurtling carriages into complete chaos. As the living dead transform the voyage into a nightmare excursion, father and daughter and a small group of uninfected passengers must fight for survival. Get on board to stay alive!

TRAIN TO BUSAN, the stunning live action debut from Korean animator Yeon Sang-ho, has got the lot – white-knuckle tension, superbly choreographed action set pieces, and production values that would shame a Hollywood blockbuster. It’s been hailed as THE RAID meets 28 DAYS LATER but at the core, TRAIN TO BUSAN has a real heart with the central relationship between a workaholic dad and his estranged daughter (Yoo Gong and Soo-an Kim) giving the film a powerful emotional punch.

There is also a magni cent ensemble cast making up the passengers trapped on the Busan train, including a pair of young lovers, two elderly sisters, and, in a stand-out role, Ma Dong-seok as a man who will do anything to protect his pregnant wife. TRAIN TO BUSAN also features
one of cinema’s most diabolical villains, in the form of a businessman whose plans for self-preservation are beyond belief.

TRAIN TO BUSAN has broken box office records across Asia and enjoyed fantastic critical acclaim since premiering at Cannes Film Festival’s Midnight Screening, won the Fantasia Film Festival’s audience award and closed London’s Horror Channel FrightFest leaving the audience in raptures with many declaring it the best film of the festival.

Thanks to the fabulous set pieces, thrilling cinematography, amazing stunt work, the maddest zombies ever seen onscreen and the heart-stopping ending that comes out of nowhere, TRAIN TO BUSAN will dazzle the most seen-it-all film fan.

Now boarding, make sure you get a ticket: everyone should see this film – it’s pure cinema!