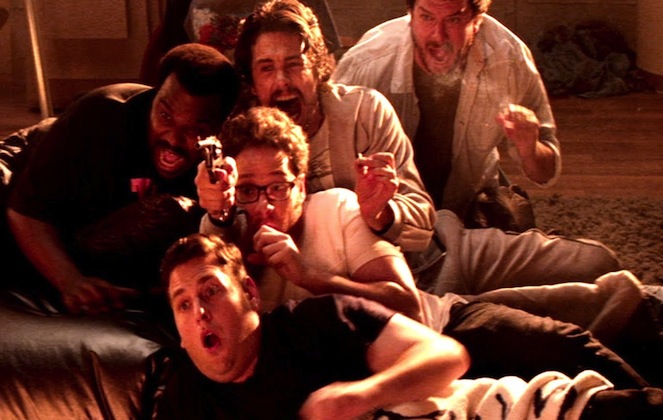 Being an Oscar winning A list Hollywood Director gave Steven Soderbergh the clout to enlist stars into making Oceans 11,12, 13 etc etc. Not being an Oscar winning A list director meant that when I rang up  Tom Cruise 9 (‘Yo Tommy C!’), George Clooney ( ‘Heeeey Georgie baby!’) and Brad Pitt (‘Brad’) all I got was a verbal reminder about the injunction each had taken out against me before they hung up! Consequently I had to resort to using my own A list namely, Fun Boy Fred, Paddy the Greek & Chip Shop Charlie. Seth Rogen on the other hand was able to call up Jonah Hill, James Franco,Danny McBride, Jason Segal, Emma Watson, Rihanna, Channing Tatum even The Backstreet Boys (surely a porn moniker rather than a boy band) and made essentially a Hollywood home movie.

With everyone playing a version of their publicly perceived persona, Rogan picks up his friend, real life actor Jay Baruchel (no, me neither) from LAX and heads over to James Franco’s  for what starts as a wild party movie. It’s here that the stars delight in sending themselves up: worthy Oscar nominee Jonah Hill, wild man James Franco and  so on. Michael Cera revels in his cameo as a drug addled sex pest and Emma Watson plays against her Harry Potter persona, this time as a potty mouthed, axe wielding star.  But here the film, much like From Dusk til Dawn takes an unexpected turn. The revelry at the party pales into comparison with what’s going on outside – where all hell has literally broken loose, with monsters and demons rampaging around a burning Hollywood as the End of Days begins.  Eventually the drug crazed, alcohol fuelled stars realise that it’s the Apocalypse, but hey, why should they worry. As one of them says, Hollywood stars are always the first to be rescued in films, right? Wrong. One of the pleasures of the film is its concept that all film stars’ knowledge is  based on what they see in movies, notably an inability to realise that copying scenes from The Exorcist won’t work when one them is possessed

Rogan adapted this from his own short film (Jay and Seth vs. The Apocalypse) and gleefully kills off the cameos at the same time he shows the main cast to be wholly inadequate, reducing them to a handful of squabbling teenage boys. It’s all very laddish, taking pot shots at everything from exploitative film titles (Ninja Rapist) to British food, to CGI demons with monster phallus’s. It even features a movie within a movie, with their homemade unsanctioned sequel to Pineapple Express.

At an hour and three quarters it outstays it welcome and loses its narrative drive at times through sheer  self indulgence, with sequences going on for too long as the stars clearly ad lib scenes. Rogan acknowledges early on, as do some of the others, that they mostly play themselves in every film. It’s just a pity he didn’t acknowledge the need for a good editor too!