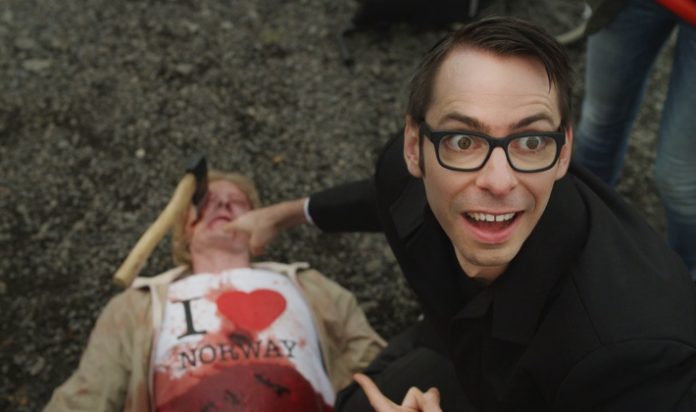 It is our pleasure to host a two-part look at the recently-finished Swiss event for Fantastic Film, Asian Cinema and Future Images from up-and-coming international entertainment writer James Lewis.  Here he looks at the horror films that played the festival, many of which will play this year’s Film 4 Frightfest in London.

This writer was unfortunate enough, on one occasion, to witness a friend reclaim Forrest Gump’s most famous aphorism with regard to the film festival experience. To his mind, much of their appeal stems from the freedom afforded spectators to be pleasantly surprised by their inherently unpredictable programming, as if audiences were somehow gliding thoughtlessly from screening to screening, devoid of any prior knowledge or expectation.  But no, festivals are nothing like a box of chocolates. Unless your brand of choice happens to include both exquisite confections as well as a large quota of unsavoury propositions, many of which are quite possibly insalubrious. In fact, the likes of the Neuchâtel International Film Festival are perhaps better compared to a box of Bertie Bott’s Every Flavour Beans… that of a particularly unlucky glutton. Filled to the brim with deceptively-appetizing shapes and colours, these often reveal a bitter or downright revolting aftertaste. Indulging one’s sweet tooth becomes a journey involving many disappointments and some serious candy-speleology.

The boisterous character of NIFFF’s crowds, on the other hand, suggests they don’t really mind that much. Indeed, they’re much happier rowdily manifesting their satisfaction–shouts, laughs, and applause aplenty!–for high-concept goofiness like Zombeavers and Wolfcop than, say, Glazer’s visionary Under The Skin, which was met with contemptuous chuckling. Thankfully for those gore-hungry spectators, the festival’s most extreme section, Ultra Movies, proved a haven for silly narratives, dark–and often broad–humour, and buckets of blood, delivered in a healthy variety of textures and colours. Yet a handful of NIFFF’s selections were guilty of panderings to its audience, while at the same time undermining them by providing nothing but derivative, and more often than not inferior, works. That symptom was most obvious in Jimmy Weber’s heinously amateurish Eat, the tale of an aspiring actress’ downward spiral into self-cannibalism, which can only be described as a cheap, shallow, and markedly less intelligent distant cousin to Marina De Van’s sharply disturbing In My Skin. It shares its unsatisfying insubstantiality with the protracted Indonesian murder flick Killers [due out on U.K. DVD & Blu-ray 1st September – Ed.], a project that evidently aspires to the heights of Korea’s finest revenge-thrillers but lacks any of the tonal mastery and polished execution that set those apart. Add to that list Hammer’s disappointing The Quiet Ones, an uneven hodge-podge of 70s-styled found-footage and possession horror, Extraterrestrial, the Vicious Brothers’ appalling Spielberg-meets-Matrix-in-Raimi’s-cabin hack work, as well as the offensively bad Discopath, and it’s hard not to give in to cynicism.

Or so it would be, were it not for a few choice films—all firmly rooted in that most unruly territory of genre cinema that is B and C movies—whose irreverence, humor and headcount, all delivered with ample generosity, conspired to bring a refreshing relief to those late-night screenings. Tommy Wirkola’s Dead Snow: Red Vs. Dead unleashed anew the nazi-zombies of his fan-favourite Dead Snow to a rapturous reception. By shedding its predecessor’s debt toward Sam Raimi’s Evil Dead, as well as cranking every aspect up several notches, the sequel almost feels like a new concept altogether, one that is infinitely more coherent, raucously funny, delightfully revolting and–crucially–endlessly satisfying. Zombeavers and, to a lesser extent, Wolfcop both shine for their adherence to old-school DIY as far as the design of their creatures are concerned (the former’s gleefully ridiculous animatronic rodents are a particular highlight), as well as for their obvious affection for the lovable Z movies of the 70s and 80s. Raunchy, unbridled, unpolished, the screenings roused NIFFF’s crowd into a vociferous frenzy, and effectively kept them at a boil till the credits rolled.

While the horror genre wasn’t as well represented outside of the Ultra Movies section, its scarcity also guaranteed a certain level of quality. The main competition was struck alight by David Robert Mitchell’s smartly terrifying It Follows. After she has sexual intercourse with her boyfriend, Jay promptly discovers she has contracted an alarming curse: everywhere she goes, she is doomed to be followed by an indefatigable, though one-paced, shape-shifting entity. Mitchell’s almost entirely bloodless film succeeds in maintaining an unsettling feeling of unease throughout, employing a variety of clever techniques to make its languid, predictable, “thing” one of the most disquieting villains in recent memory. Whenever it borrows from Carpenter, it’s only inasmuch as it is the polar opposite of the modern horror flick, eschewing unearned jump scares in favour of constantly keeping its characters–and its audience–on its toes. If there’s any justice in the world, It Follows will adorn many a genre aficionado’s end-of-year list.

The same should be said, though it most certainly won’t, of Til Kleinert’s Der Samurai, a film that , in truth, escapes any sort of comparison. The German director almost perfectly conflates a rural town’s one-off nightmare of destruction, delightfully excessive murder and feverish ambiance with the sexual awakening of the main character, on-the-job officer of the law Jakob. After he finds a gown-wearing, katana-wielding man in a cabin in the woods, a night of chasing beckons during which the deadly antagonist gradually reveals himself as the mirror for Jakob’s repressed desires. Genre cinema isn’t particularly well-known for its embracing of queer sensibilities, and so Der Samurai should serve as a brilliant reminder that horror’s historical subversiveness need not be so exclusive to normative visions of sexual identity. Brutally honest, delirious and uncategorizable, Der Samurai is a spectacular and unique film that transcends genre, and shifts form as it progresses.

Also amongst the International Competition titles was Ivan Kavanagh’s muddled debut film The Canal, the narrative of which feels like it could have produced another two movies. Not an unusual flaw for a first film, the Irish production is plagued by a desire to throw everything into it, on both the screenplay and aesthetic levels. While its directionless plot undermines coherence, its visual polish consistently mesmerizes. Indeed, cinematographer Piers McGrail displays equal skill for the feverish colour-tinted world of giallo as he does for the creepy J-horror and archival segments. It’s unlikely to attract much attention outside of horror completionist circles, but its visual panache keeps it from sinking into complete obscurity. If it is remembered, it will likely be for its visually-appealing journey through a range of horror subgenres more than for the story it tells.

Credit should also be given to two respectable selections that, while not setting the world ablaze, brought something interesting to the table. The first is Honeymoon, a horror-romance hybrid whose thin storyline might have benefited from a little trimming, in which two newlyweds’ perfect honeymoon in the woods is ruined when the bride starts to act strange. The contrast between the adorable first half and the second, as it gradually goes from eerie to horrifying—and revolting—makes for an unusual experience. The second is Housebound, New Zealand’s second main competition title and eventual claimer of the festival’s top prize, a lighthearted midway point between horror and parody. Johnstone’s film is more of a playful pastiche which means every genuinely scary episode is swiftly deflated by comic relief, be it through the protagonist’s stubbornly confrontational approach to the house’s hostile spirit or the persistent undermining of the creepy mood with a selection of well-timed visual gags. The Jury were evidently more convinced than this writer that the right balance had been struck between the two styles, but there’s no denying its appealing accessibility and refreshingly smart flippancy.

If this year’s horror roster wasn’t as vibrant as it has been in recent years, the many disappointments that peppered the line-up were nevertheless overshadowed by the handful of truly great movies on display. Der Samurai’s innovative and progressive genre-busting, Dead Snow: Red Vs. Dead’s joyous fan-service, It Follows’ smart scare tactics and tasteful homages, or Zombeavers’ headfirst embrace of its amateurism and preposterousness, all serve as proof that blood still runs warm in the genre’s veins. There was much evidence that flesh has continued to decay, that filmmakers are still hesitant to go against the grain and breathe new life into the oft-sterile cesspool of genre convention, but the above examples should prove that any approach is viable if it is executed with intelligence, generosity and a respect for the audience it so relies on to exist.