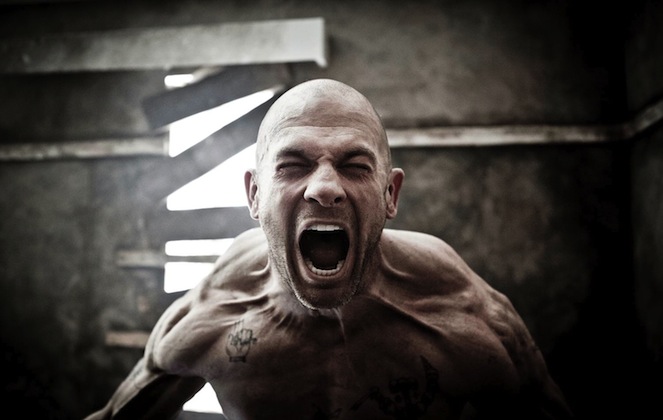 Film critics sit through a variety of cinematic atrocities (yes I mean you, Sex Lives of the Potato Men!) and it’s not often that people who are paid to see movies get up and walk out. Frankly there are worse ways to earn a living, but this is the first film this year to have over half the audience walk out within 45 minutes. Whether it be through nausea, boredom, disgust, disdain or probably more likely queasiness about the subject matter remains to be heard, but it’s safe to say that The Seasoning House is probably not the best date movie.

Prosthetic make up expert Paul Hyett puts his knowledge of gruesome effects to grim work in this, his first feature film as a director. It’s based on research by Helen Soloman into the subject of sex trafficking, where victims in areas of social upheaval are preyed on, abducted, dehumanised and brutally sexualised in so called Seasoning Houses. The terrified girls are quickly acclimatising to prostitution, with threats of extreme violence and the forcible injection of heroin to make them subservient. Rosie Day who plays ‘Angel’ (subtle this ain’t), having been taken from her family at the height of the Balkan war, works as a sort of housemaid at the house. One of  her tasks is to inject the girls with heroin, and if she doesn’t carry this out she will get a beating herself. A deaf mute, she strikes up a friendship with one of the new girls who has a working knowledge of sign language. All goes well until Sean Pertwee and his handful of muttering military mercenaries arrive. Then one of them brutalises her friend. At this point the violent and depressingly grim movie takes  the exploitation thriller route as Angel sets about gaining revenge on the soldiers and her captors. Any concession to female empowerment is quickly quashed as Hyett indulges his skill in delivering gory effects, whether it be a knife through the face or a bullet to the head.

The scenes that work best are set in the house itself, with Angel using the space behind the walls and between the floors to outmanoeuvre the men. But the tension levels drop when the action moves outside and it all comes down to the ubiquitous one on one climax.

Hyett has worked on films for Neil Marshall and James Watkins and is influenced by the latter’s film Eden Lake.

This film’s main strength is Rosie Day’s central performance, but all the men are uniformly unpleasant, cowardly bullies. There are effective moments and the basic set-up is initially intriguing, but it turns into a female revenge thriller along the lines of I Spit on Your Grave –  and without the inventive deaths. It’s a missed opportunity as an expose of Seasoning Houses would make for a grimly compelling documentary rather than a run of the mill grisly thriller.