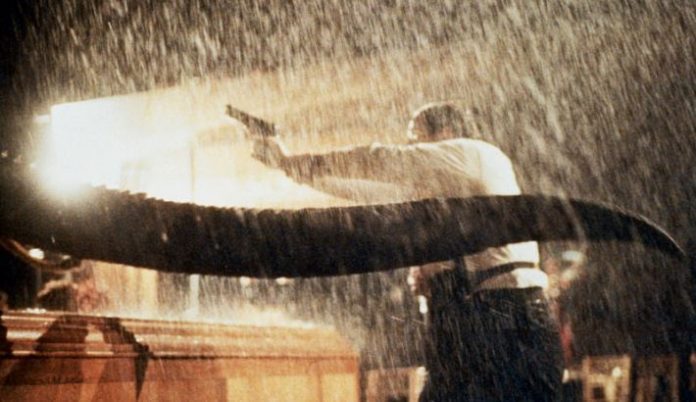 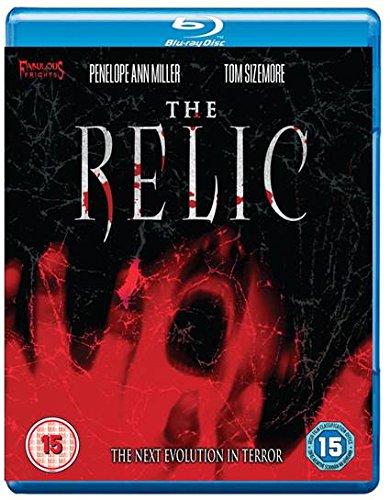 Review
Re-released onto blu-ray in the U.K. by Fabulous Films from the Universal back catalogue (although a Paramount theatrical production), this 1997 Peter Hyams-directed adaptation of the 1995 debut novel from Douglas Preston and Lincoln Child moves the action from New York to Chicago but otherwise keeps it relatively intact.  Genre veteran Hyams combines with fellow vets producer Gale Anne Hurd and creature-meister Stan Winston to produce a finely-crafted piece of old-school monster mash, classing up a pulpy Crichton-esque page-turner with a terrific cast, good Chicago location work, typically excellent cinematography from Hyams and a nice score from John Debney. 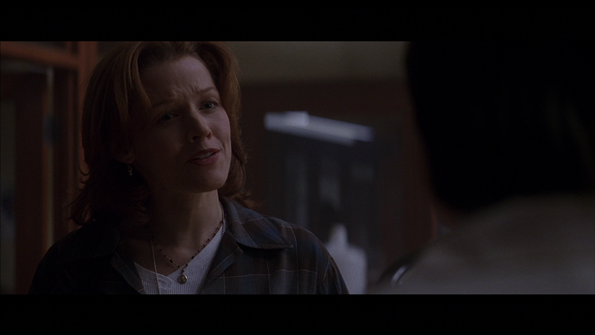 The plot and characters are very much in the mould of that decade’s TV sensation The X-Files, with Tom Sizemore’s superstitious police lieutenant Vincent D’Agosta the Mulder to Penelope Anne Miller’s Scully-esque evolutionary biologist Dr. Margo Green (getting a career bump up and red hair here from the brunette PhD researcher in the novel). The way myth and science are intermingled, the idea of a South American mythological creature loose in a U.S. museum decapitating folks for a piece of their brain, the Alien/Aliens-esque approach in the film, the use of minimal lighting with darkness and shadows, these were the hallmarks of the early years of The X-Files, and this works in the films’s favour even now, giving it something to set it apart from other films of the period and other monster mash movies since. Hyams also throws in a disaster movie-style sequence where the wealthy V.I.P.s of the charity benefit do get trapped in the museum while the rest of the guests flee. It’s a nice cine-literate touch in a film full of them. 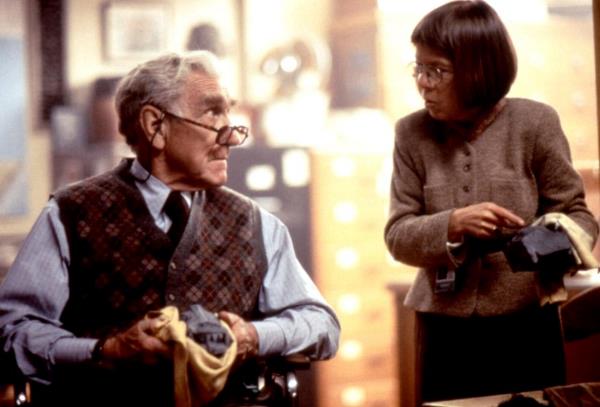 John Debney’s score reinforces the Aliens comparison, nodding to James Horner’s classic score (itself built on Jerry Goldsmith’s ace work on Alien). There’s also a nice level of icky creature effects along with human and animal gore, not something one expected back then from a film starring award-winning performers of stage and screen Linda Hunt, James Whitmore and lead Miller, although the latter was in the middle of a genre streak that would endear her to some fan’s hearts (or at least that of your blogger’s!). (That said, the trend definitely kicked off two years earlier in Species where your blogger can remember being in the cinema and turning to a friend to say “Does Ben Kingsley need to get himself a new agent?!”)  Hyams always worked with good actors, however, and was underrated for his ability as a director to get good performances out of them on camera; everyone here gets to elevate the clichés and character beats typical of such a piece and make their mark, giving another reason beyond Winston’s ace effects to watch The Relic particularly if one is a fan of character actors and smaller players in American films.  This reviewer, for example, enjoyed seeing Clayton Rohner as D’Agosta’s suffering partner alongside John Kapelos and Tico Wells as cops who go up against the creature, while seeing Miller go from studenty department head to getting her Ripley on in a Nikita-esque little black dress, saving herself and everyone else without a man to do it for her, is absolutely worth the price of admission.

Video & Audio
Now this is a really, really good transfer, even if not up to the spectacular standards of recent blockbusters.  Easily one of the darkest, least-lit films we’ve ever seen, up there with The Descent for its use of deep blacks, natural shadows and single source of illumination, this master from the MGM catalogue was obviously made at a time when more care was taken with transfers, accurately reflecting Hyams’ palette and widescreen framing while retaining a natural film-like appearance.  Frankly, the film didn’t look this good in cinemas let alone on VHS or DVD; even a scene like d’Agosta and Green talking to the restoration specialist in a lab lit only by the UV lamp shining on the artefact retains fine detail in the lit areas and natural blacks everywhere else.  This is topped off with a DTS-HD MA 5.1 track that accurately conveys the extensive f/x (including very interestingly layered creature growls) and John Debney’s score, the latter riffing on James Horner’s Aliens score in interesting ways.  Frankly, having seen this film in three previous formats, your reviewer is happy to own this version as it’s even better than the original theatrical experience in the nineties, and wipes the floor with previous home video versions.

Extras
Fabulous Films’ press release announced a trailer, but even that is nowhere to be seen on the menu. Sadly, the reportedly excellent director commentary from the U.S. edition is M.I.A. over here. All in all, a big fat zero, disappointing for fans of the film or its director. 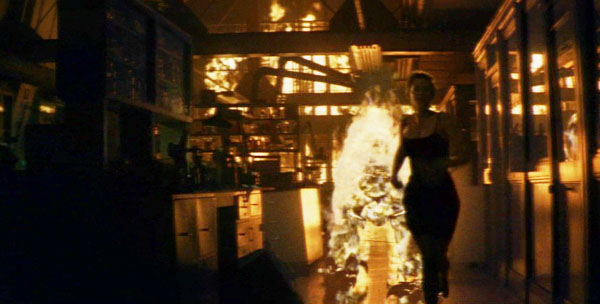 Conclusion
Given Preston & Child wrote an equally best-selling sequel it’s a real shame Paramount didn’t make back the rumoured budget in domestic theatrical on this film, as it would have been a real pleasure to see Sizemore’s D’Agosta and Miller’s Green back again in the tunnels of Manhattan. All in all, the film is proof that they don’t make ‘em like this anymore, still a cut above similar films of the period but leagues ahead of some of the rubbish we’ve put up with since then. Compare with the equally entertaining but stylistically very different Deep Rising the year after, which sees the advent of fully computer-generated gore and the tentacular villain of that piece; nowadays carefully crafted bigger-budgeted b-movies chillers like The Relic, Mimic and even The Faculty feel like last gasps of an earlier, more considered, more physical way of giving us scares compared to future overloaded efforts that the nascent CG in these could merely hint at.