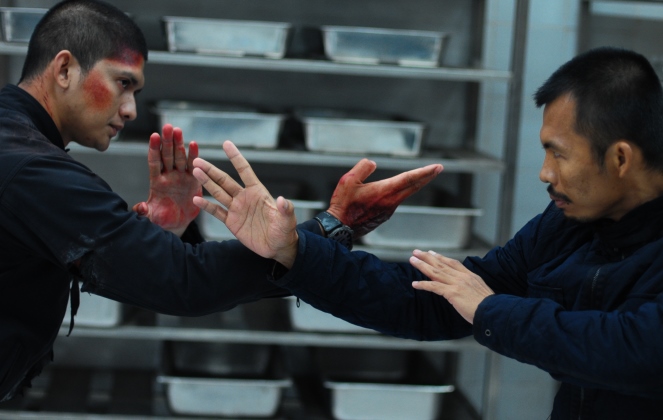 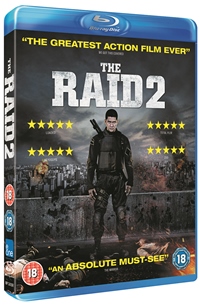 Title:  The Raid 2 – Buy HERE
Label:  eOne
Release date: 11th August 2014
Format:  Blu-ray (also available on DVD)
Video format:  1080p
Aspect Ratio:  2.35:1
Soundtracks:  DTS-HD MA 5.1:  Indonesian/Japanese/English
Subtitles:  English
Runtime:  150 mins
No. of discs: 1 x BD-50
Packaging:  1 x standard x-disc amaray, also Ltd Edn Steelbook
Region Coding:  Region B
Rating:  BBFC 18
Official Synopsis
He thought it was over. After fighting his way out of a building filled with gangsters and madmen, rookie Jakarta cop Rama thought he could resume a normal life. He couldn’t have been more wrong. His triumph attracted the attention of the criminal underworld, and with his family at risk, Rama has only one choice – to go undercover and begin a new odyssey of violence. 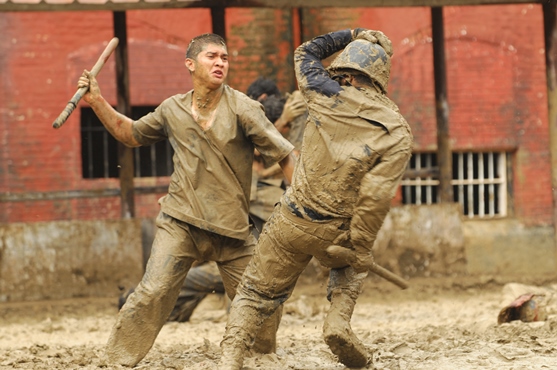 Review – Blu-ray
What this dark gangster epic loses in its transition down to smaller screens, it makes up for with increased clarity and a more-easily appreciated sense of pace.  Those huge, sometimes overwhelming, widescreen compositions are more easily taken in by two eyes now on (in this case) a 42” screen, when in some cinemas one had to choose which part of the screen to look at.  This definitely allows for a greater appreciation of director Gareth Evans’ visual choices, alongside the work of cinematographers Matt Flannery and Dimas Imam Subhono and the production designer.  The slower, lengthier nature of the film also works better at home, where the viewer can sink in to the back-and-forth of the plot with no pressure to make the train or bus home, as well as the ability to rewind and catch important subtitles.  All in all, it still works very well indeed at home, while still remaining relentless and full of impact as it builds up. 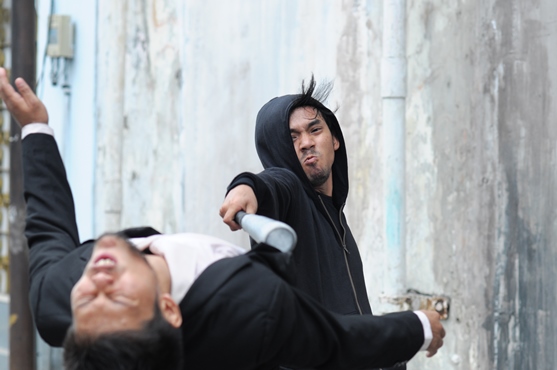 Video & Audio
Superb on both counts, as has been pretty much consistently the case with eOne blu-rays over the last couple of years.  However, for those who saw the film in theatres there a handful of noticeable differences in how the film looks here.  The grading is much clearer here, meaning in some scenes what had previously looked like natural skintones, or at least lit a certain way, here take on a tint consistent with the scene overall e.g. grey or brown. Other scenes have become much darker overall, especially the opening few scenes.  Others later on have a much finer balance, with terrific detail throughout.  It makes for a moodier film than before, more clearly governed by a desired colour scheme.

The audio thumps out just as it should, but also important is the ambient weight of certain quieter scenes, designed to oppress despite the space seen on screen.  In that sense the soundtrack works hand-in-hand with the very modern electronica score from Ari Prayogi, Joseph Trapanese and Fajar Yuskemal. It’s a crucial part of the film’s ability to play with tension, fear and excitement in the audience. 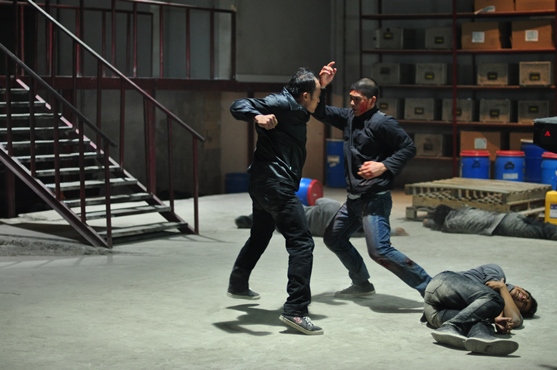 Extras
As with the excellent U.K. releases of both Evans’ previous films, there’s a lot here to dig into surrounding the conception, creation and release of his third actioner.  First up is his solo commentary, which is an entertaining listen, covering pretty much everything you could want to know, although he does say at the beginning that he aimed to avoid duplicating too much what would end up in the featurettes and other extras, dating the commentary to early on in the release process.

The Next Chapter: Shooting a Sequel is a ten-minute featurette that sets up most of the essentials of the film’s creation and shoot.  It’s actually much, much better than longer featurettes for other films.  Watch for the clear shot of the stunt that nearly cost Evans his life, although they don’t tell you it’s that one – it’s were one of the 4x4s barrels off the road and narrowly misses the cameraman on the roadside!  Ready for a Fight: On Location runs a bit longer and gets into the meat of the fight and stunt work.  Deleted Scene – Gang War is the bloody gang shoot-out already released online some months ago that would have sat in the middle of the film as part of the montage of the various encounters once warfare has commenced between the factions.  As well-executed as anything else in the film, its removal doesn’t hurt the film one bit.  However, there is no sign of the extended single take scene Evans talked about removing during the theatrical junkets, or the one showing our hero’s attack on the politician’s son early on, which now takes place off-screen. 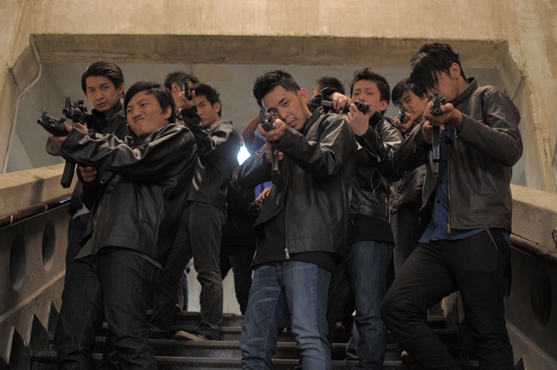 The Cinefamily Foundation Q&A with Gareth Evans, Iko Uwais and Joe Trapanese is a 45-minute after-screening chat from one of the film’s American screenings, and has already been available online. It’s pretty decent.  Violent Ballet: Behind the Choreography is the last BTS featurette, getting further into the fight and stunt work.  Finally, attendees of the FilmFour FrightFest exclusive screening will be pleased to be able to spot themselves in the audience (including your reviewer!) during the UK Exclusive Q&A with Gareth Evans, Iko Uwais and Yayan Ruhian.  At 8 minutes long, however, the actual 30-minute-plus event has been ruthlessly edited down, partly for understandable reasons (no consent from the audience members asking questions, who have been replaced by stills with their questions on them) and partly for some other mysterious reason (maybe Evan’s extensive and enjoyably foul language? His declaration of “what the fuck happened to HMV?!” seems to have gone!).  At least they left the impromptu Silat demo in… 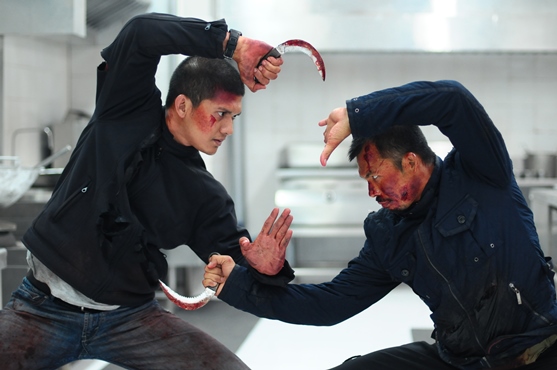 All of these serve to contextualise the film nearly as effectively as a package from Arrow, MoC, Criterion, Carlotta or HK Legends.  One gains new insight into, and much greater appreciation of, all the work that went into making this film, some of it very dangerous indeed for the crew, let alone the cast.  Kudos to each and every person who worked on the film. (Although your reviewer still wants to know if that was deep-fried tofu served in the prison canteen along with the veg mix and rice; if so, that’s the healthiest prison meal we’ve ever seen in a movie!)

Conclusion
After multiple viewings in theatre and at home, we here at the blog can honestly say the film holds up as the huge leap onwards from The Raid it was touted as, as much as that one was from the excellent Merantau.  Lessons learnt by Evans on his horror directing have fed into the mix, making for a much darker movie than your standard actioner, having more in common with classic Hong Kong Category III flicks and 21st century Korean gangster movies than the John Carpenter vibe of its predecessor.  The incorporation of Japanese acting talent on-screen and Hong Kong action talent behind the scenes shows how Evans is fusing these different action traditions into his own brand of Asia Extreme, willing to risk the lives of himself, his cast and his crew to entertain all of us bloodthirsty action junkies the world over.  This one will make end-of-year lists, without doubt, and with good reason; as we wrote before, you are highly unlikely to see action this well-made between now and the end of the year, and halfway through, we still haven’t.