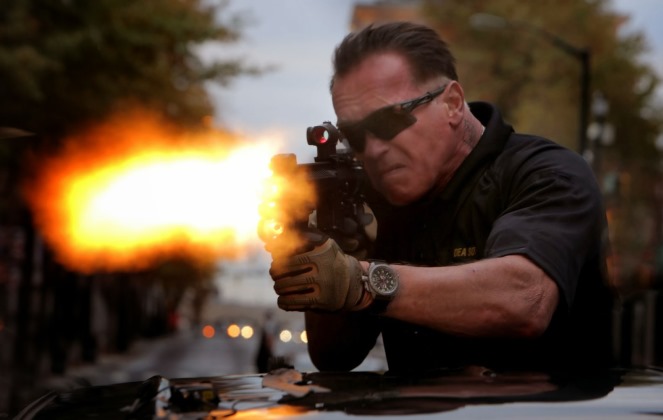 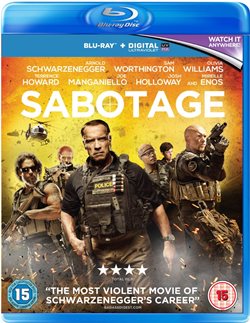 Review – blu-ray release
The only problem with murder mysteries, or films dependent on a twist, is their re-watch value. At worst, the viewing experience is rendered inert, dull from the nullification of suspense; at best, they offer a different viewing experience in which you see how well laid out the clues were, how the performances were modulated to give or hide things you needed to know to solve the mystery. Director Ayer is able to get around this to some degree in that this is also an action film, and the action without question bears replaying, even more so than his other films (none of which skimped on the action front even while being gritty dramas). The performances are excellent all round, and worth savouring again, especially for fans of the many familiar TV faces. All in all, it’s certainly bears a couple more rounds in the player. 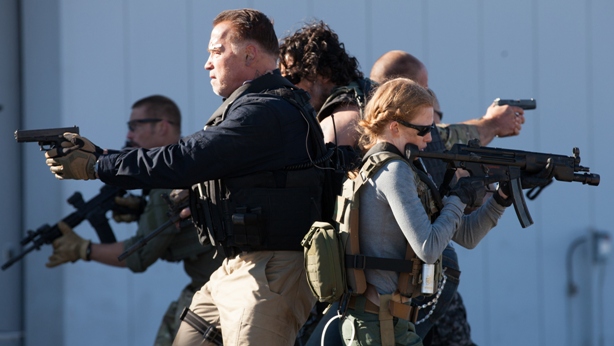 However, something we felt the first time in the cinema was reinforced on additional viewings. At various points, Olivia Williams’ role as the homicide investigator on Arnie’s case seems to be less of a second banana and more like the actual lead in an earlier cut of the film. The answer to this mystery lies in the Extras, which we delve into below. It is worth saying that we remain thrilled that one of Britain’s finest actresses remains utterly unsnobbish about genre work; Williams has form in the horror world with The Sixth Sense and Below, of course, but also in SF with The Postman, TV’s Dollhouse and The Last Days On Mars. This, however, is arguably her first proper action role, and she takes to it as readily and easily as if it were just another costume drama, getting covered in fake blood and firing off rounds and hardboiled quips as if born to it. We hope that it isn’t the last time. 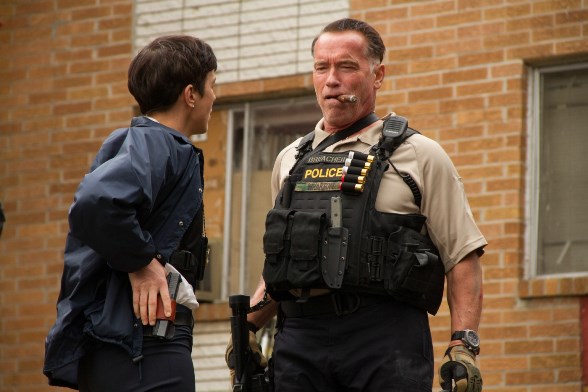 Video & Audio
Superb on both counts. Crisp modern digital work that delivers as one would expect a modern transfer to.

Extras
Lionsgate UK have included the exact same extras as appear on the Universal U.S. release: a short (under ten minutes) making-of featurette that still manages to deliver a decent look at the essentials of the production, nearly twenty minutes of Deleted Scenes (many adding in nice character work from the cast that could have done with being left in) and two Alternative Endings (one nearly ten minutes).  We strongly recommend watching the Deleted Scenes before the Endings, as both of the latter build on the very different resolution to the film one can find in those scenes. This is where it gets interesting – SPOILERS AHEAD FOR THE THEATRICAL CUT AND THE EXTRAS:

It seems that in Ayer’s original version of the film, Arnie’s Breacher isn’t someone doing terrible things for a “higher” purpose in revenging his family, but a proper scumbag bad guy, and Williams’ Brentwood continued investigations reveal the money stashed at Arnie’s place by the lake. Her knock-down drag-out fight with him is a highlight of both this version of the film and her career, as Williams and her stunt double work to make the fight credible between two such different physical types. The alternate endings then offer two ways for this version to play out, one in which Williams “wins”, one in which Arnie “wins”, the latter played as a real downer, the killer winning out (and in one version shooting up a bunch of fellow cops, in a darkly real variation on his Terminator persona).  It’s much more of a police procedural this way, closing out the investigation and tying up loose ends. 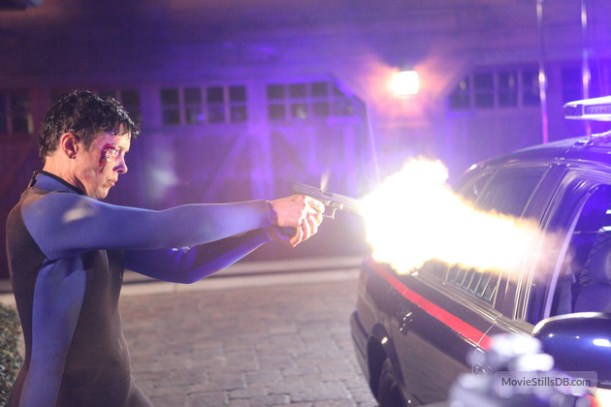 This other version of the film is one we think is actually a better, braver film, confirming Williams as the heroic lead and finally getting Arnie back to playing the bad guy, something he’s not done since the very first Terminator, but to which he is very well suited. It’s great that he chose to do this, proving yet again that this new phase of his career possesses a playfulness and willingness to challenge his abilities as a performer as well as work with interesting directors and cast members. However, the theatrical version’s ending offers a thematic resolution in its Walter Hill-styled south-of-the-border that is more palatable to the Austrian Oak’s fanbase; though not absolving him of the mayhem he’s committed, one still feels that he pays for his sins in a manner of the character’s choosing. It’s no surprise this is the ending they went with for the final cut. 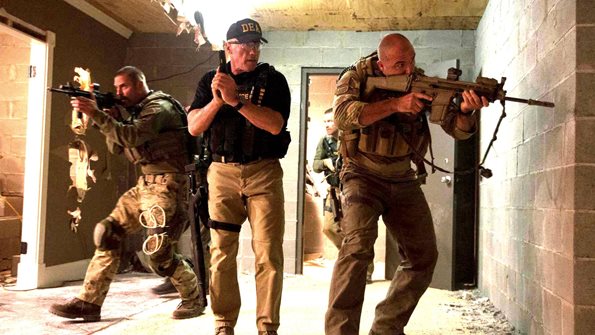 Conclusion
We’re amongst the minority in really liking Arnie’s comeback films so far: The Last Stand, Escape Plan and now Sabotage. The latter is by far the best of the three, and its blend of gory, crunching violence and grim character work bodes well for both Arnie’s next one and director Ayer’s upcoming WW2 tank movie with Brad Pitt Fury. We can see why DC Comics and Warner are headhunting him for a Suicide Squad movie, although one wonders if Ayer can be corralled by the MPAA enough for a PG-13 summer blockbuster. Or could DC/Warner do the brave thing Marvel won’t, and make age-appropriate versions of their superheroes and villains? We can but hope – the thought of a Suicide Squad movie made to the standards of Sabotage fills us with glee.