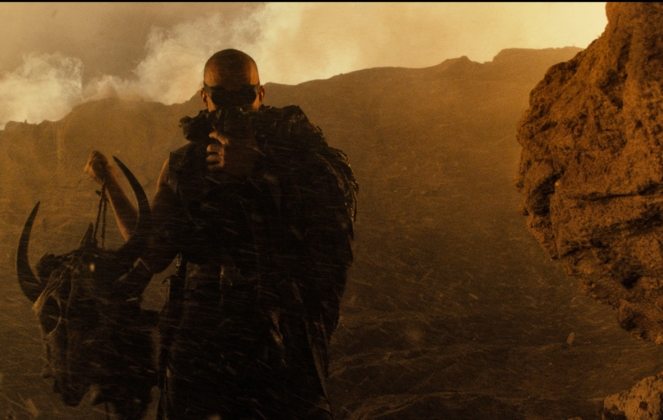 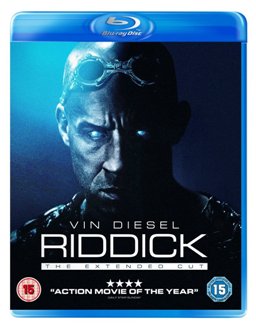 Official Synopsis
Having been betrayed and left for dead on a sun-scorched planet, Riddick must fight for his survival against deadly alien predators that exist in this barren land. After activating an emergency beacon Riddick soon finds himself battling teams of mercenaries from around the galaxy who are determined to bring him home as their bounty. But Riddick plans to seek his retribution and return to his planet at all costs.

Review
One of the unexpected pleasures of last year was discovering that Vin Diesel’s other big franchise genuinely had legs left in it when the independently-financed Riddick hit our screens at the other end of the blockbuster season from Fast & Furious 6. After the crowd-pleasing, big-budget excess of the latter, it was a real pleasure to see him get back to something leaner and meaner, under the watchful eye of fellow writer-director David Twohy. 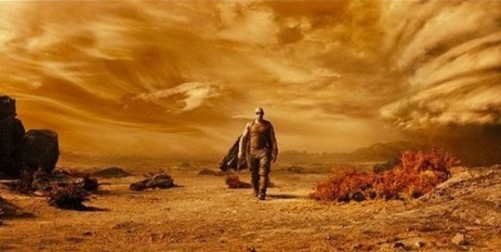 The latter has had the career most expected Stephen Sommers to have after his wonderful pulp adventure Deep Rising. Twohy’s international feature debut The Arrival was in some ways the film everyone expected from The X-Files movie and didn’t get, with a decent performance out of Charlie Sheen just when most had given up on ever seeing such a thing again. With a history of genre screenplays both before and since, he has shown a deft way with pulp that has character and soul alongside the thrills, chills and spills, with his own features amongst the best examples of such. Those screenplays and Twohy’s direction are good enough to attract real acting talent; Lindsay Crouse and Richard Schiff in The Arrival, Radha Mitchell and Keith David in Pitch Black, Bruce Greenwood and Olivia Williams in Below, and so on. This allows him to build his genre pieces with far more convincing talent than sometimes films of that ilk and those budgets can get.

In that sense, after the bigger budget and epic scale of The Chronicles of Riddick, whose reception – lacklustre by Universal’s projections at the very least – seems to have forced Twohy back to basics with the exciting A Perfect Getaway, this new film seems like a step forward for all concerned. Riddick proves that the mid-range genre film, the kind being squeezed out of the current film production and distribution system, still has audiences out there, hungry for something lacking bloat and overkill. The film is, in its first act, a throwback to a particular strain of pulp SF, one that has its roots in the most traditional of adventure fare – one man against the elements, proving himself against nature before he can take on enemies his own size again. In keeping with such stories, Diesel & Twohy take Riddick from the throne we last saw him on, and has a Necromunger detachment leave him for dead on a planet he thought was his lost homeworld Furya. In true pulp style he survives a potentially fatal fall, heals his wounds, survives the deadly creatures of this wilderness planet orbiting a brown dwarf star, tames one to be his pet, and plans to get to higher, more fertile ground – the perfect metaphor for what the film itself is trying to achieve.

The second act brings in the world we are already familiar with from the previous films, animation and games, with two teams of bounty hunters coming after the ex-con. The rag-tag band led by Spain’s fantastic Jordi Mollà and the WWE’s Dave Bautista offer a seedy, villainous contrast to Aussie former rugger player Matt Nable and genre stalwart Katee Sackhoff’s uniformed, professional team; the former, in true spaghetti western style, are seen to have used a female prisoner for sordid kicks before dumping her on the planet in order to make space on the ship (weight vs. fuel ratios are clearly important on these small spacecraft we see). When Mollà executes her for a reason only he seems to understand, she bleeds out near Riddick, and we see how far he has come since Pitch Black; instead of sitting there coldly, or leaving her for his own safety, he shows some sort of disgust or anger at what has happened to her, and stays within her eye line until she breathes her last. A small gesture, perhaps, but in this dog-eat-dog Leone-esque universe, it’s more than one expects.

The final act sees the surviving characters all back in Pitch Black territory as they must band together to survive against the planet’s native species emerging in the torrential night rains. Secrets are revealed, betrayals take place, and it seems like cowardice is hereditary. Like a Frazetta painting, Riddick finds his back against a rock, staring at a hard place, death staring him in the face, rain pouring down. It’s as classical a moment of pulp adventure cinema as we’ve seen in years, all the better for its simplicity in every sense, and the same can be said of the film as a whole.

The director’s cut adds approximately eight minutes to the narrative, consisting mostly of extensions to the Necromunger scenes, giving us more Karl Urban (always a good thing), more nudity, a couple more kills and a final scene that offers a clearer sense of where a fourth film will head. For fans, this is a good thing indeed; however, interviews with amongst others Sackhoff suggest there were character scenes still not retained, and considering the debate her role has provoked amongst some critics it seems a shame those weren’t made available in some form. Certainly, those interested in that particular issue will find interesting statements in the extras from her that might add fuel to the fire. 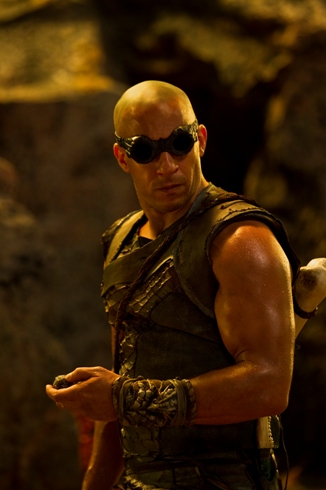 Video & Audio
Universal are three for three now with their first-class transfers for Twohy & Diesel’s interstellar bad boy. The visuals are perfectly rendered, so much so that in a few places the CG joins show. All the usual indicators of quality – colour, lighting, texture, fine detail for video; f/x, music, conversational clarity, impacts in action for sound – are all present and correct. Depending on your local cinema, this may well be a better presentation of the film as seen theatrically; it’s certainly exactly what one expects from an effects-heavy feature of recent vintage, indie production or not.

Extras
While lacking an insightful Twohy commentary to add to those of his already on the shelf, the 40 minutes or so of featurettes manages to go slightly deeper than puff promos, with all the actors getting brief moments to themselves, the usual praise from the producer and director for the stars and each other, as well as the stars for the director. Within those, however, there are nuggets to be gleaned about how the film was put together, what it is like working with Twohy, and the clear understanding of what he and Diesel wanted to achieve with the film and how they did so.

There’s also the motion comic Riddick: Blindsided, a good intro to the theatrical feature made partly redundant by the extended cut, but still includes a fight scene not in that version, so worth having for that. All in all, a decent if unspectacular package from eOne; not the best of the series, but considering the film might never had been made at all, an honourable effort.

Conclusion
Not aiming to win any new followers here, Riddick is about as close as you get to a Kickstarter film without using the actual system. Demanded by an audience and made very much for them, the film does what it says on the tin, but in its director’s cut lays out the way for a fourth film in the series, if Diesel and Twohy can raise funding again. At a cool $98 million-plus worldwide box office for a reported production budget of $38 million, it doesn’t look like they’ll have any trouble with that. The Blu-ray is absolutely worth acquiring for fans, with remaining HMV stores selling the U.K. steelbook exclusively. Here’s to Part 4, whenever it turns up.