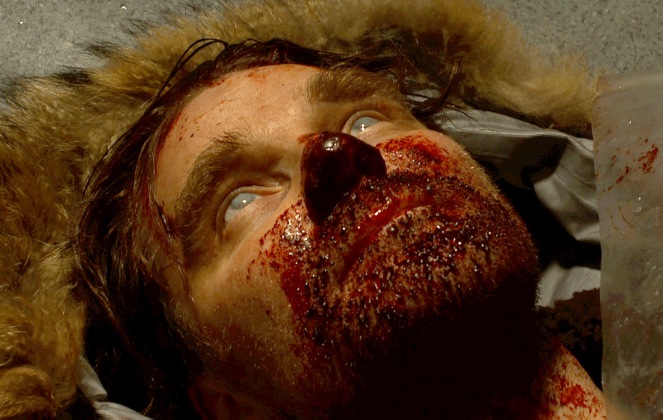 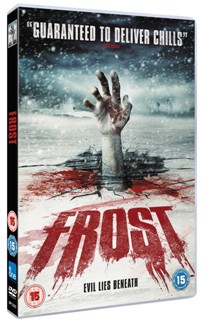 Label: Entertainment One
Release date: 10th February 2014
Format: DVD
Video format:  PAL
Aspect Ratio:  2.35:1
Soundtracks:  Icelandic
Subtitles:  English
Runtime:  79 mins + 10 mins extra
No. of discs: 1 x DVD-9
Packaging:  Keep case
Region Coding: Region 2
Rating:  BBFC 15
Official Synopsis
Filmmaker Gunnar (Björn Thors) arrives at a remote glacier camp on the outskirts of the Arctic Circle to meet up with physiologist Agla (Anna Gunndís Guðmundsdóttir) to make a documentary about the research being conducted there. The next day they discover the camp mysteriously abandoned and their co-workers gone without a trace.  As darkness descends and the camp is shaken with ear-splitting shrieks and violent flashing lights, the couple bravely venture out into the vast nothingness frantically following a trail of blood in the snow in the hope that it’ll lead them to their missing colleagues, unaware of what they’ll find at the other end…

Review
And so another “found footage” chiller hits the U.K. DVD market *yawn*. Except this is an Icelandic feature from director Reynir Lingdal, who has two successful comedies under his belt over there as well as hit TV show The Cliff, which had supernatural elements, and writer Jón Atli Jónasson (Thicker Than Water, The Deep) so it’s not just a bunch of newbies hoping to hit horror gold. Unfortunately, despite good acting and stunning location work in difficult shooting conditions, the film ultimately fails to deliver real scares beyond the chilling atmosphere and expertly-built unease, and it is quite easy to pinpoint why.

The first is that within the “found footage” horror subgenre there have developed certain techniques and ideas about how to best use the format to scare the audience. While all the shaky-cam, loud noises, bright lights and digital noise can make the viewer jump, sometimes right out of their skin as hoped for, there is only so much restraint that can be shown vis-a-vis the threat. At some point, however, the audience really must see the threat in some manner, however short or fast the glimpses. A simple case in point would be the recently-released Banshee Chapter reviewed previously on this blog, which had few scares but carefully parcelled them out and delivered on them in shocking, bloody in-your-face style.

Here, director Lingdal and writer Jónasson have actors Björn Thors and Anna Gunndís Guðmundsdóttir spend much of their time telling us what they’ve just glimpsed, but for three-quarters of the film’s lean running time we never see it ourselves. There are no glimpses, sudden rearing into view or rushing across the screen of something terrifying, no “corner of the eye” moments that have proven to work so well in such films, most recently in Renny Harlin’s The Dyatlov Pass Incident. The latter is an excellent comparison and would even make a good double-bill with Frost if it came second, as not only does it also put its actors in amazing locations difficult to shoot, but it delivers more clearly and carefully on the lurking terror being uncovered. In Frost there is simply nothing, just the wind and the snow and eventually one slow reveal of what turns out to be a  former teammate, bloodied and collapsing, which is shot in such a way that any tension dissipates rapidly.

Secondly, much of last year’s crop of these “found footage” horror films from around the world suggested we were seeing the exhaustion of the style, as film-makers working within the subgenre pushed ever closer back towards traditional film-making. More than ever it is clear how much commercial pressure is being placed on creators by distributors, marketers, sales people and producers, to make films in the subgenre because they sell, not because the story being told can benefit from the form. Frankenstein’s Army, Banshee Chapter, The Dyatlov Pass Incident and now Frost would all clearly work very well indeed as traditionally-made feature films, and nowhere is this more obvious in the latter than when the film switches to exactly that format for the last ten minutes or so, and goes from loose and uneasy to absolutely riveting and utterly chilling. Everything improves – the pacing, acting, composition, lighting, framing of locations – and Anna Gunndís Guðmundsdóttir’s already watchable performance grabs centre stage and grips to the end. Even the first portion of the final credits looks like an amazing opening credits, ones a traditionally-shot horror flick might have, and it’s a crying shame they didn’t follow that route.

With better grasp of genre technique and of the subgenre itself, this could have approached the quality of an Icelandic [REC](Guðmundsdóttir is reminiscent of that series’ Manuela Velasco minus the hysteria). With the confidence to shoot this film without found footage or with a minimal element, however, this could have been a serious entry into Nordic horror worthy of watching much more than just the once.

Video & Audio
A good-looking transfer, with the crisp glacial locations looking really stunning, while skin tones and colours look very good indeed. Excellent audio, doing exactly what you expect a “found footage” film’s soundtrack to do, which is most of the heavy lifting when it comes to chilling you. The final portion of the film has that lovely grim steely look beloved of so much Nordic Noir that it’s quite a shock after some of the brighter colours and beautiful outdoors of earlier in the film.

Extras
A lone 10 minute BTS featurettes that lacks any kind of contextualisation, but shows you cast and crew on location shooting the film. It looks like shooting conditions were just as harsh as the finished film suggests, but everyone seems to keep in good spirits even when the wind is blasting them out in the snow.

Conclusion
A success in some ways, a failure in others, this could have been a real genre entry of note from Iceland. Sadly, it doesn’t come close to fulfilling its own ambitions, but there’s enough cinematic technique and great location work to make it worth seeing at least the once. It certainly suggests that the next time director Reynir Lingdal and/or writer Jón Atli Jónasson tackle a horror piece, it will be one well worth watching.