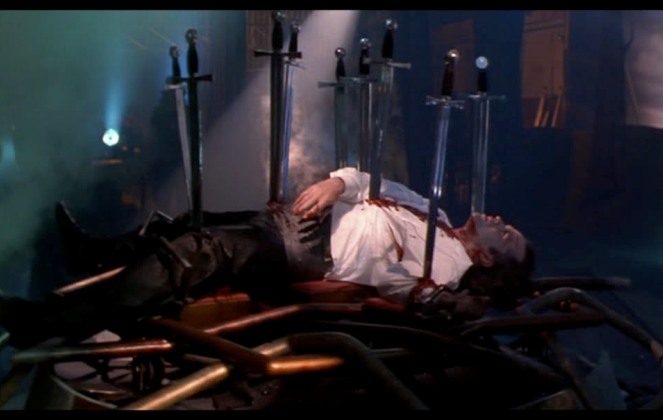 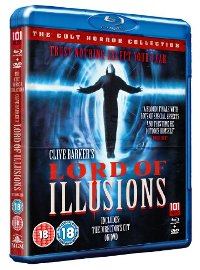 Official Synopsis
A private investigator hired to protect a popular stage magician finds himself drawn into a dark, occult underworld in this supernatural horror film from writer-director Clive Barker (Hellraiser, Candyman, Nightbreed). The danger begins for detective Harry D’Amour (Scott Bakula, Star Trek: Enterprise) when he is approached by a beautiful woman, Dorothea Swann (Famke Janssen, X-Men 2). Dorothea is married to Philip Swann (Kevin J. O Connor, There Will be Blood), a wealthy illusionist who has found fame by disguising real magic as stage trickery, and believes that her husband may be in danger. Harry reluctantly agrees to investigate, and he discovers that Swann has made enemies of a bizarre religious cult who wish to resurrect their leader, an evil sorcerer killed by Swann.

Review
The greatest loss to modern horror on film was when Clive Barker’s directing career wound down post-1995 as he concentrated on writing, production, videogames, theme park rides and his greatest passion now, art. He kept trying to get films made, but other than producing the stunning Gods and Monsters, there’s only been the odd TV or DTV film come along, none of the impact of those early ones, with the exception of Ryhuei Kitamura’s gorily entertaining adaptation of The Midnight Meat Train.  With last year’s fan assembly of Nightbreed and now this HD re-issue of Lord of Illusions, the opportunity to re-assess his short yet powerful directorial career is ripe, and considering the state of the genre, perfectly apropos. 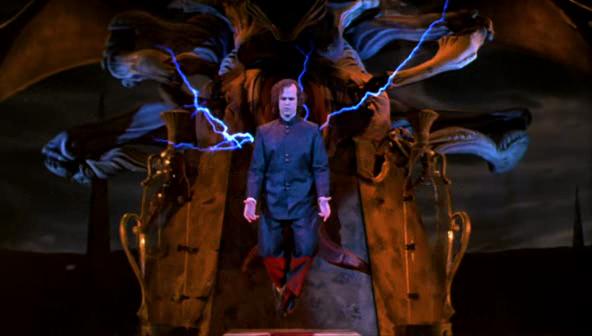 Lord of Illusions was arguably both his most ambitious picture as a director, yet also in some ways the most conservative one.  Whether this is in reaction to the negative response to the truncated version released of Nightbreed or is inherent in the chosen subgenre – the private detective/mystery form – remains debatable, as much is about all of his films, but that is just one of the factors of Barker’s enduring appeal.  Certainly, it’s the one most like a traditional Hollywood pic, with recognisable stars (even if earlier on in their careers), a Calfornian moviescape, and a much clearer sense of good and evil than in either of his previous two pictures.  Was this to make a more commercial vehicle?  Was it to create something with the chance of a wider audience than the hardcore faithful and the new converts from earlier films?  One wonders; Nix’s more traditionally bonkers Californian cult and their living quarters are not a million miles away from the Breed’s Midian, almost like a dismal flip side emblematic of human new age weakness instead of ancient tribal strength, which suggests much about this particular narrative.

Opened out from his short story The Last Illusion into a full-blown film noir, it also seems like a classic film about Hollywood and showbiz, with Harry D’Amour, travelling from a blue-gray rainy New York to sunny California for a decent-paying job without supernatural overtones, resembling Barker travelling from the U.K. to America to make movies and more.  The commentary retained on the DVD here reinforces this possible interpretation, with Barker talking about D’Amour as something of an alter ego in his writings, always drawn to the dark side, while Barker’s love of old movies, the Magic Circle and even certain locations in Hollywood all feed into this vision. 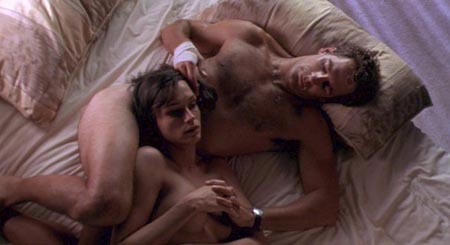 However, this is Barker, ever the tempter, the transgressor, pushing the envelope in ways that confuse and unsettle many viewing his films, be they industry or punters.  There are ample moments of unease, discomfort, disgust and fear throughout, varied and finely-tuned, like few horror directors know how to create.  Barker re-uses certain classic shots from film noir, but then finds original horror twists on familiar moments.  His love of a particular era of Hollywood shines through in a sequence like the one surrounding Swan’s big show, all old-school glamour with a touch of Vegas thrown in, or the meeting between Dorothea and Harry in the graveyard.  Not afraid to use process shots or then-still-fresh CG, he finds ways to use both that maximise each technique; the idea of an effect based around geometric shapes plays to the strengths of computers, for example.

The film cements just how original he was in his thinking about the horror genre, how much thought and consideration went into putting the inspirations of his dreams into a feature film, and how barely anyone has bothered to approach the genre in such a subversive way since.  Where Nightbreed posited a tribe of the monstrous as positive representation of people from alternative subcultures, we now live in a genre landscape where the dark alternative beauty of the witches in the final fight of Hansel and Gretel:  Witch Hunters are only there to be slaughtered by the handsome movie stars, a particularly Nazi subtext if ever there was one.  In Illusions the real horror is not in Harry’s investigation (although Barry Del Sherman’s Butterfield certainly brings nasty moments to it) so much as in the cult members and how their leader, Danel von Bargen’s Nix, uses them.  The details are what get under the viewer’s skin, in particular during the climactic sequences, with the mass cries of pain and suffering grouped on the soundtrack like a choir of the Damned. 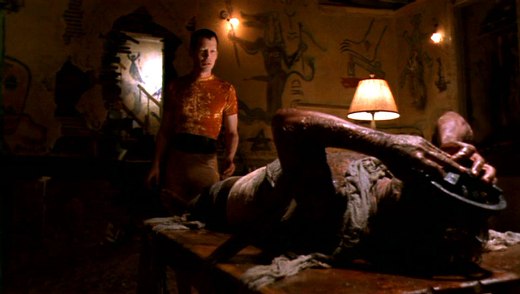 Davids Lynch and Cronenberg continue to be feted by arthouse enthusiasts, almost as an apology for their work being so resolutely of the horror/thriller genres even as it exploded and redefined it, yet they never speak of Barker the same way, and nor do enough horror fans, who really should.  A champion of the genre when it was under attack in the 80s, he fought with producers and censors well into the 90s (and this may give us a clue as to why he stopped directing) for his grand vision of horror.  Surreal and haunting as defined by Hellraiser, Nightbreed and Lord of Illusion (as well as Bernard Rose’s superlative Candyman), it has remained uncharted territory since, other than perhaps on occasion by Guillermo Del Toro, and when you look around at the state of the genre now, it is simply lamentable that no-one has dared tread down the pathways first mapped by this Crown Prince of Horror.  Can anyone today claim to have created so many iconic monsters in such a short time as the Cenobites, the Breed and Candyman?  Certainly none with the metaphorical weight; most across the last ten years have been just variations on existing themes, designed but not inspired.

Perhaps those working in the genre just don’t dream as Barker does, or certainly did then.  As one of that rare subset of horror films that are also film noir/P.I. films – Angel Heart and the brilliant Cast A Deadly Spell would be the most obvious antecedents – it straddles genre uniquely well in the director’s cut, less effectively in the theatrical cut.  The cast are pretty perfect, but Scott Bakula simply is Harry D’Amour the way Connery was Bond for many, or Stacy Keach was Mike Hammer for a TV generation (not for film audiences, we understand), the perfect screen embodiment of a prose fiction character.  That this didn’t spawn sequels is a crying shame; we could have happily lived with a new Bakula D’Amour flick every few years whether based on Barker prose or original ideas; PR pics for the upcoming NCIS: New Orleans suggest that, although turning 60 this year, Bakula would have no trouble stepping back into the private eye’s shoes convincingly for one more case. 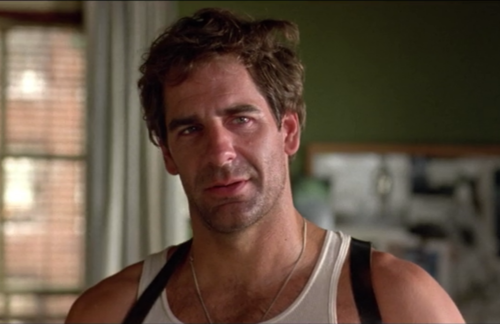 Certainly, the morass of dark urban fantasy-crime novel hybrids that have come to weigh down shelves in book shops and online store warehouses in place of original horror or fantasy all fail to subvert or transgress in the way Barker does with D’Amour, even if this film could superficially be a template for so many of those books.  Barker used genre to his own ends, as opposed to adhering slavishly to it, refusing to just settle for shock moments and jump scares, both on the page and on screen.  A Harry D’Amour film series might have been just the thing to prevent that publishing critical mass of these sorts of books, but then again, it might have inspired better ones instead.  Time has shown that if you respond to Barker’s ideas, they never let go, getting under your skin the way good horror should.  By that token, Lord of Illusions remains a successful film, for all the flaws of budget or production or casting or time.

Video & Audio
The MGM-supplied HD remaster of the theatrical cut is gorgeous. It’s not quite in the top tier of catalogue releases, if only because of the numerous optical and early CG work that could all be further restored, as well as the colours and the aspect ratio.  Still, it’s good enough that both it and the excellent LPCM 2.0 audio track (not 5.1 as listed on the sleeve) make one wish the Director’s Cut had been remastered instead, given it’s the better version of the film as well as the director’s avowed preference.  No subtitles either for those hard of hearing.

We would have illustrated this review with actual stills from this remaster for you to judge for yourself, but sadly despite requests the label were unable to supply us with any.  Until we upgrade our home kit to be able to pull screenshots from blu-rays, you’ll have to take our word for it or buy the set to make up your own mind.

Extras
None on the Blu-ray; the DVD retains the first-class commentary from the laserdisc, but neither the deleted scenes or the Making Of that were also on it.  Still, these two never made it to any of the DVD releases either, so from the fan/collector’s perspective the laserdisc remains the package to beat.

Conclusion
Along with their other March blu-ray of Stuart Gordon’s hugely fun Dolls, these releases show 101 Films stepping up their game from recent acquisitions, looking to get a toehold in the “remastered classics” market.  Both are excellent releases of their films, but Lord of Illusions isn’t the definitive edition fans have been waiting for.  Still, it’ll do until such a thing comes along, and is a decent way to revisit this unusual and rewarding genre-bender.