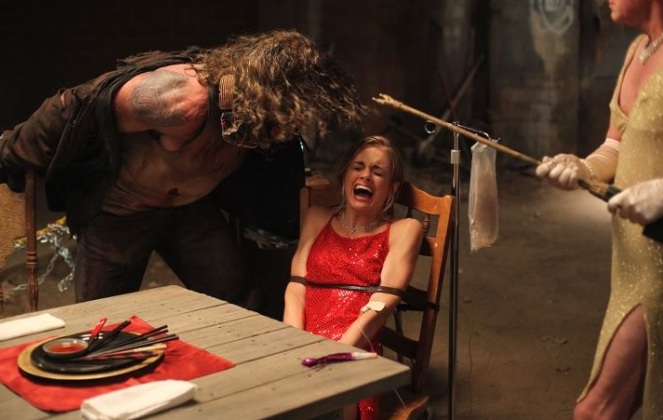 Sam Lewis reviews the latest slice of super-inde American horror to get a U.K. release, this one from 101 Films. 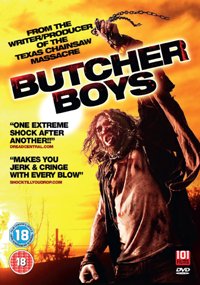 Official Synopsis
From the creator of The Texas Chainsaw Massacre comes this gut wrenching non-stop roller coaster ride through the hellish underbelly of inner city America. A birthday celebration at an upscale restaurant sets in motion events that bring a group of friends face to face with the macabre world of cannibals, the Butcher Boys, international predators who deal in human flesh dead or alive.

Review
From the mind of Kim Henkel (The Texas Chainsaw Massacre), and under the directorial supervision of Duane Graves, and Justin Meeks , Butcher Boys is a somewhat messy affair, centered around a group of eccentrics and their cronies who take the phrase “You are what you eat” a little too seriously. These creeps serve up human flesh in an up-town restaurant and are hell-bent on capturing teenage girls Sissy and Barbie (Ali Faulkner and  Tory Tompkins) as an appetizing addition to their menu. 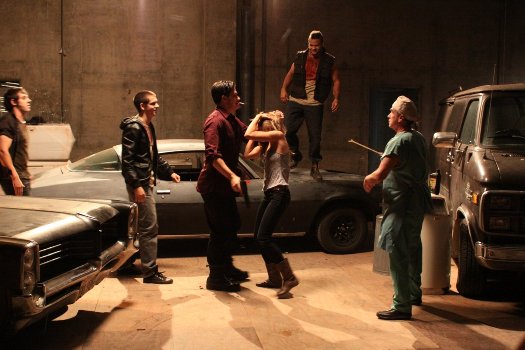 It’s not exactly breathtakingly original, but if you enjoyed the misfit family characters from TheTexas Chainsaw Massacre, then this should go someway to keeping you entertained. However, it must be said that there is a vast chasm in quality between Butcher Boys and the original 1974 slasher classic. There are definitely familiar elements from the TCM world: cross-dressing madmen, a brutish giant who speaks in grunts and…chainsaws, to name just a few. But unfortunately, without a compelling and well-paced narrative, these just feel like aimless ideas thrown in for good measure. It’s not all bad news for Butcher Boys; there are some seriously blood-curdling moments, held up by great visual effects, it just takes a while to get to them.

Regrettably, things don’t get off to a great start. The opening gambit in which a young girl gets bundled into the back of a black van half-way through ordering lunch falls flat. There’s a fast blurred movement, a half-hearted shriek, and then a cut to another little girl looking on aghast, as the score overbearingly punctuates the supposed gravity of the event. The dark, moody music continues over the title sequence, consisting of shaky arial footage of an indistinguishable American city by night; a complete stylistic mismatch. 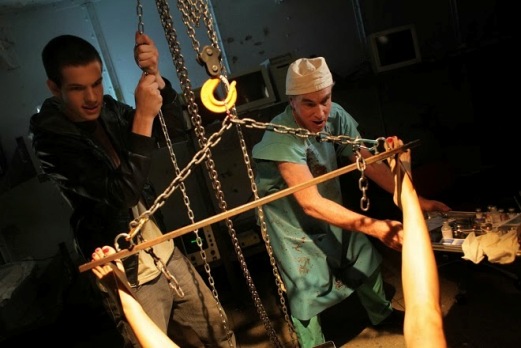 A high-octane car chase through a grimy industrial part of town reclaims some lost momentum post opening credits, and this set-piece is pretty well handled, though marred slightly by some god-awful dialogue. The upshot of the bad acting/writing is that it’s fairly entertaining, and as is often the case with slasher flicks, it makes it all the more satisfying when these poorly realised characters finally get hacked to pieces.

Though the suspenseful hide-and-seek scenes between anonymous thugs lead by co-director Justin Meeks and nondescript young pretty girls are well shot, the whole pacing of the film is off. To the point that half an hour in to this film about cannibals, there is still no mention of cannibalism, or any hint as to the identities of our shady antagonists. Instead, the entire first act consists of teenagers being chased around a grotty industrial yard at night by generic bad guys with handguns, without any narrative contextualization. An earlier introduction to the forces at work here, even a subtle one, would have made the first act much more intriguing. This is a classic example of how keeping the audience in the dark too long stops a story from making any sense. What is at stake here? Who are these menacing young men? And why should we care? 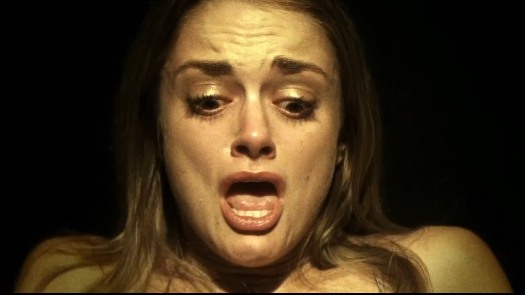 Once the initial drawn-out chase sequence is done, the film does offer some chilling horror and serious gore. Hot-headed Barbie is caught and fiercely feasted upon by a group of hungry young men, and their loud, vigorous flesh chomping, along with visual effects depicting this poor girls torn out larynx make for a truly chilling sequence.

With Barbie out for the count, Sissy is taken away to Cannibal HQ. The third act which sees the last surviving heroine attempt to break her chains and make off with her rump in one piece, takes place in an altogether more imaginative setting, with some scary (though somewhat derivative) characters. An insane surgeon, a leather-face type animal-man and a camp eccentric with a pencil mustache and great taste in cravats all inhabit the cavernous cellar beneath the restaurant. It’s an altogether more sinister ensemble, and the film could have benefitted from more time spent in this den of weirdos, instead of dwelling on a stagnant chase scene in a dimly lit warehouses for 40 minutes. Unfortunately, despite the introduction of these weird and wonderful characters, there is still no compelling story to speak of at this point, so sadly it’s too little too late. 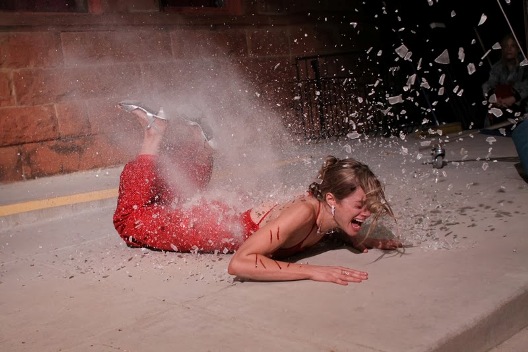 Video & Audio
The score is somewhat uninspired, relying predominantly on the repeated use of a creaky gate sound effect, in combination with those standard low-budget, modern horror dissonant whines and groans. The sound production also leaves something to be desired. It’s a Dolby Digital 5.1 surround mix, but stylistically choices often destroy any sense of atmosphere, and occasionally dialogue clarity is lost to diagetic environment sounds, which detracts and distracts. The picture quality of this DVD is ok and the cinematography is competent, though there are no really memorable shots to speak of.

Extras
None. Sadly no bonus features are included with this release from 101 films, just a cinematic trailer and scene selection option.

Conclusion
There’s a stylish, slick, cannibal horror story in here somewhere, and though the set design, costumes and visual effects make Butcher Boys occasionally visually interesting; it never really escapes its ultra-low-budget trappings. Script flaws and poor performances can be easily forgiven if there is a sense of macabre fun and a high entertainment factor, but overall, this film is lacking in both. It tries too hard to be serious and all too often ends up directionless and disengaging. Butcher Boys’ tagline describes it as ‘the spiritual sequel to The Texas Chainsaw Massacre (1974)’, but in truth, that’s being somewhat kind. Having said that, if you’re a horror fan who’s hungry for another taste of the TCM world, and the gore and madness that entails, you’ll find this film a palatable dish, if not quite a delicacy.