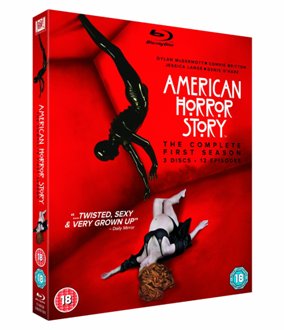 Official Synopsis
Brace yourself for an addictive thrill ride! American Horror Story is TV’s most original new drama, a deeply stylish psychosexual haunt devised to keep you on the edge of your seat. The Harmons’ (Dylan McDermott, Connie Britton) fresh start in a new home deviously twists to reveal discoveries of love, sex and murderous revenge. Featuring a Golden Globe®-winning performance by Jessica Lange, Season One scares up a host of engrossing extras.

There is something about this first season that just doesn’t work. So much does though, that one’s enjoyment of it becomes selective, as it’s hard to enjoy the whole thing.  Much like the house itself, it’s crammed to the bursting with ideas, genre references and moments that crowd each other out. Just when the viewer thinks they’ve got a handle on this show’s version of the “monster of the week”, ongoing threads intrude or are wrapped around that week’s newcomers before moving on from them. The problem is that those that are relevant are not always the ones most time is spent on. Also, the moment the viewer works out the core supernatural set-up, the realisation sets in that the fresh kills both in the pre-credits flashbacks (which are full of surprise guest stars) and during the episodes will mount up to a legion of ghosts, contributing to the overload already mentioned. 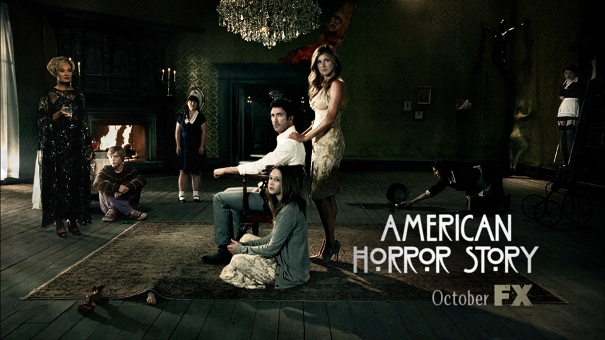 The core cast do good work, particularly the playing against type of Dylan McDermott and Connie Britton – the latter does stuff one never thought she would do on-screen, and does it convincingly however mad everything around the character is. Jessica Lange lays it on as thick as the faded Southern Belle accent she sports throughout, yet remains as commanding a screen presence as she ever was.  Lily Rabe, Sarah Poulson, Kate Mara, Christine Estabrook, Jamie Brewer, Taissa Farmiga, Frances Conroy and Alexandra Breckenridge do utterly sterling work, often beguiling, frequently fearful, never less than the weight needed for the characters to convince. Evan Peters, Zachary Quinto, Morris Chestnutt and Dennis O’Hare are good, but no match for the variety and strengths of the women; for all the violence visited upon them, the women hold the upper hand throughout the series in every way, which is certainly refreshing compared to some horror films of late.

The direction often feels less than cohesive, as if the unity brought to a television show by the DoP and producers has somehow been abrogated by the individual episode directors. This contributes to the show’s messy, overloaded feel. There are sequences that work very well individually; hats off to the teams behind the terrifying school massacre sequence late in the season, Britton’s sex scene with the gimp-suited figure early on, and the early episode focused on the home invasion  – easily one of the best episodes in the whole run.

It is, however, a distinct failing when one of the single most terrifying things in the whole series is actually only made clear by the creator of the credits sequence in the extras! This is a show in which, once subtlety went out the window, the best ideas got buried inside the surface stuff that R-rated horror films deliver anyway. The ending feels like they just ran out of steam, ending up in comedy territory instead of the horrific dread of the start, and that’s a crying shame for a show made with so many resources trying to live up to the expectations of the title. 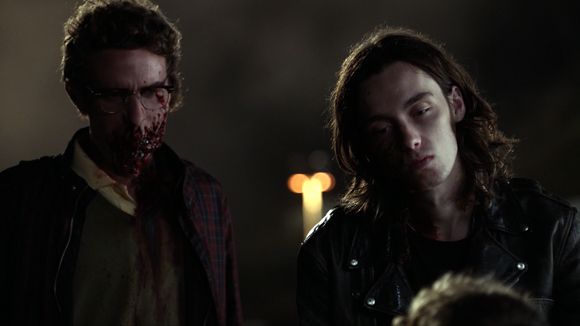 Video & Audio
Terrific on both counts, exactly what one expects from a modern TV release. Tight, clean, clear picture and sound, with the range of colour and contrast in both to make you jump or freak you out as necessary. There is something very unsettling in the bass frequencies, but if that doesn’t make you ill it certainly adds to the dank ambiance even in bright daylight scenes.

Extras
Disc 1 carries a commentary from creator Ryan Murphy that is reasonably informative, but demonstrates an attention to surface detail that suggests something of why the series’ later faults emerge. On the final disc are four behind-the-scenes extras that make up for the lack of other commentaries.  Behind The Fright: The Making Of American Horror Story features a great deal of behind-the-scenes footage as well as interviews with cast and crew packed into just under half an hour.  Overture To Horror: Creating The Title Sequence is a solid look at the credits sequence, created by the legendary Kyle Cooper, reveals much about not just the sequence, but some of the creative intentions behind the show as a whole. Meet The House Ghosts takes us through the many marvellous cast members as well as their on-screen personas, while Murder House: Presented By Eternal Darkness Tours is a tourist video from the Murder Tour seen in the show that adds a welcome final frisson to the whole package.

Conclusion
Now into its third season and a jewel in the F/X crown, it certainly leads the pack for breadth of genre scope. However, despite the high-quality ingredients, the first season is an overstuffed junk food meal instead of the more finely-cooked multi-course banquet those ingredients might lead a discerning viewer to expect.  Worth the viewing, but expectations should be lowered from the hype for maximum benefit.