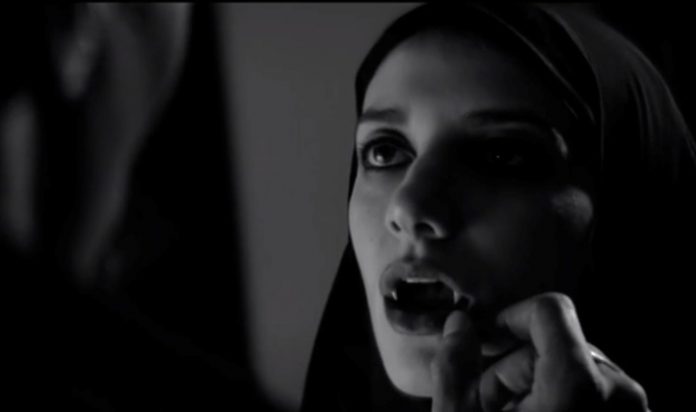 Review
Achingly hip American-Iranian film A Girl Walks Home Alone At Night arrives on U.K. DVD (and Blu-ray) bearing such a weight of critical praise that it’s hard not to approach it with some degree of caution. While the film ostensibly falls into The Dark Side’s favourite genre, this is much less a horror film and more a moody indie piece in the U.S. tradition of Jim Jarmusch and David Lynch. The horror elements are minimal, part of a larger fresco of influences director Ana Lily Amirpour gets to pour out, meaning your enjoyment of this will depend on how much you expect it to be a horror film or not, and whether you like the influences on display.

The obvious ones are:  spaghetti westerns, especially those of Il Maestro Sergio Leone (the director’s father used to watch them all the time), mostly evident through chunks of the marvellous soundtrack as well as the fictionalised edge-of-the-desert city setting; David Lynch, Quentin Tarantino, Jim Jarmusch and Alejandro Jodorowsky; less obviously, the director in the extras adds Robert Zemeckis’ first two Back To The Future flicks, John Landis’ short for Michael Jackson’s Thriller, and specifies Lynch’s Wild at Heart as her fetish film that she expects to be referencing for her career. That’s not to say fans of these individual influences will automatically enjoy this film, but the director wears her influences on her sleeve much as Tarantino did back at the start of his career, and that didn’t work for all audiences, so as diabetics say, Your Mileage May Vary. Certainly there are some great moments combining fine music choices, stylish camera work and the actors to considerable cinematic effect, and for some, these may be enough.

In the end, quirk and style is all very well and appealing, but we learn more about Amirpour’s film and music collection than we do the characters, and the accumulation of incidents offered in place of a story doesn’t actually amount to much narratively speaking. Setting it in a fictional Iranian town with everyone speaking Farsi superficially differentiates it from a film from any other creator with similar creative influences, but any particular overall metaphor relating to Iran itself or the Iranian diaspora may be reaching too far. One individual arc to be found in the Deleted Scenes lends itself to such interpretation, as does the Vampire’s choice of targets, but really this film is solely about what’s inside the director’s head, and one’s enjoyment of it will be very much based on how simpatico one is with her interests.

Video & Audio Quality
As modern DVDs go, excellent picture and sound, upscaling well. One imagines the Blu-ray exceeds in all areas as one would expect. 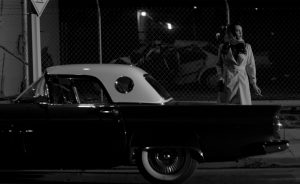 The deleted scenes are very interesting, as they add an entire additional arc or loose subplot for the transvestite cowboy (girl?) character that features another delightful musical interlude; this last scene suggests yet another possible metaphorical statement about Iran if one chooses to see it there. The revelation by the director that the drug dealer’s tattoos are dirty jokes in Farsi pinpoints the degree to which the film’s best ideas are inaccessible to a wider audience beyond people like herself and her friends; smarter work by the distributors – subtitling the tattoos, for example – would have made more of the film available to enjoy.

Conclusion
Indie style over substance, this has been a critical and festival darling and looks set to be the go-to poster/desktop wallpaper/late-night movie for a generation of students and hipsters to come. Older, wiser heads may enjoy the superficial pleasures but will look forward to seeing what director Ana Lily Amirpour and star Shelia Vand respectively do next.