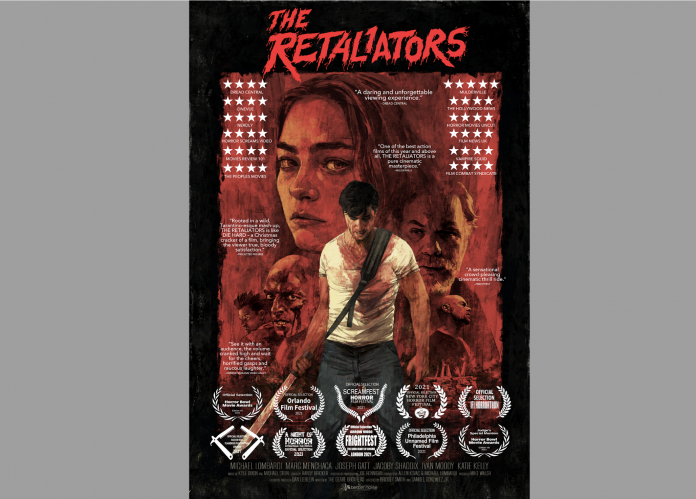 The Retaliators opens with a portentous voiceover: “When do the sins of a good man make him bad — I guess it all comes down to choices”. I have a feeling we are about to find out about those choices!

The film itself starts intriguingly… what appears to be a body is dumped down a well. A heavy rock soundtrack blares out. Two girls take a wrong turn down a remote private road and are attacked by what appear to be zombies. A hero appears and a head is lopped off. “They’re not zombies” declares the bloodied interloper who has come to save them. All this in the first few minutes.

We then cut to what we assume is the story proper though this film is so messy it’s difficult to tell at times — Mild mannered pastor John Bishop (Michael Lombardi, also one of the three credited directors) is out buying Christmas trees with his two daughters. When another customer takes the tree one his children wants he doesn’t stand up to him. Instead he uses it as a lesson in one of his sermon’s, much to the consternation of his eldest Sarah (Katie Kelly).

Against his better judgment he allows her to take the family car to go to a party. Filling up at a gas station, she sees something she clearly shouldn’t have and is soon being chased by bald headed miscreant Ram Kady (a suitably nasty Joseph Gatt) in his black muscle car. Running her off the road, he pushes the smashed up car into the nearby lake, drowning her.

Grief stricken by the death of his offspring, our previously peace loving pastor vows to take his revenge on her killer. Detective Jed Sawyer (Marc Menchaca) is assigned to the case and is not all he seems — he asks Bishop what would he do if he had one minute alone with the murderer? Why has he floated this proposition? What does he know? You’ll find out later…

Alongside all this we have rival biker gangs and drug deals going on which may or may not be connected and a fractured storyline — written by Darren and Jeff Allen Geare — that lacks clarity and is often just confusing. Whilst there is a pervasive sense of violence and a grungy, grimy, sweaty vibe there are too many disparate threads which don’t feel woven together. Of course this may well be due to the fact that this has three directors: Samuel Gonzalez Jr., Bridget Smith and the previously mentioned Lombardi.

As questions of morality and faith are explored about halfway through this tips into bizarre, almost Evil Dead territory as the zombies/not zombies make a splattery, full on appearance (no spoilers as to what they really are) leading to a gore soaked finale — no messing about, revenge is had!

If you are a heavy rock/metal fan then some fun may well be gleaned from the appearance of various band members as parts of the gangs (they also feature on the soundtrack) — which I am reliably informed by the press release are Tommy Lee, Five Finger Death Punch, Jacobs Shaddix (Papa Roach), Spencer Charnas (Ice Nine Kills), Escape the Fate and The Hu. You’ll be able to tell who they are as they can’t really act.