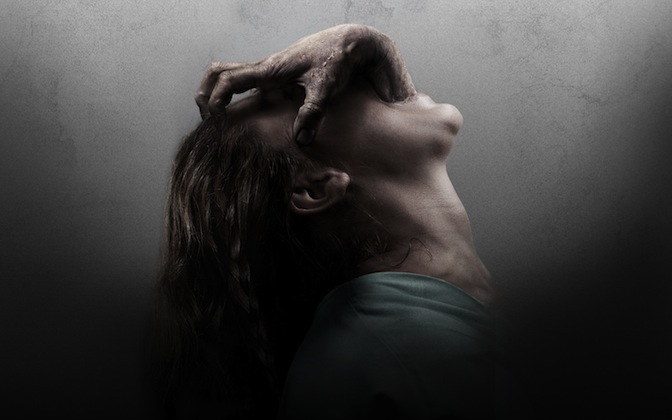 c Though the history of curses cannot be definitively verified, what is certain is that they are seen to be the work of the Devil, Black Magic practice or City Bankers. Many curses placed upon people appear to have been born from nothing although some becoming an MP is the best way to increase your chances of having a curse placed upon you!
Anyway we only mention it because of ‘The Possession’ being out this week which is an eerily effective little scarefest made all the more alarming as it’s allegedly based on a true story. Here, a young girl buys an antique box at a car boot sale and wouldn’t you know – it only houses an evil and violent spirit which possesses her! D’oh! And it’s left to her parents to find a way to stop the curse.
This is a Sam Raimi produced title and is similar in theme to his rip roaring ‘Drag me to Hell’ but with somewhat more realism. It’s an entertaining enough story although suffers, as do all possession themed films, if compared to ‘The Exorcist’ but there’s enough here to sustain its 92 minutes.
With its premise based around a curse and because we’ve clearly too much time on our hands we at DARK SIDE found some creepily cursed cobblers that remind us all that breaking the rules can incur a person’s wrath or at least mild irritation.

We kick off our journey through history with the most famous Pharaoh to have ever lived – Tutankhamun – or Tootty to his mates.
During the first century AD the Arabs were the first to suggest that a Mummy could come to life and punish anyone who entered a Pharaoh’s tomb. So when the tomb was indeed opened in 1922, the head of the excavation team, Howard Carter, warned that a curse had been placed upon Tut’s tomb and all of its contents. Some claim however that this label was placed upon all tombs in an effort to deter looters, grave robbers and rioting youths ( although the latter were put off when they found there was no JJB Sports inside)
But all of this is curious when you take into account the strange deaths that occurred shortly after the tomb was opened.
Firstly, and perhaps most high profile of all, was the death of the man who financed the archaeological dig, Lord Canarvan, who died from pneumonia brought on by complications from a mosquito bite in Cairo. It is alleged that all the lights in both Cairo and England lost power at the exact moment he died. Stranger still, Canarvan’s dog also fell over dead at the same time! Bizarre or bollocks? You decide
Several others, including Carter’s assistant, his assistant’s father, and some of Carter’s relatives also died. But Carter himself managed to escape unharmed. Lucky him!

From the Ancient Egyptian curses we move onto 17th century India whereupon the theft of a large blue diamond from the forehead of an idol of the God, Sita, led to priests placing a curse upon it. Soon after, the priceless stone was sold to a French gem merchant who was later killed by a pack of rabid dogs shortly before the diamond had been sold to Louis XIV. Louis himself died painfully of gangrene, his body was later violently exhumed and destroyed during the Revolution, and all of his legitimate children died in childhood, leaving the throne to his, then five year old, grandson, Louis XV.
He too, was succeeded by grandson Louis XVI who inherited the diamond which wife, Marie Antoinette (supposedly) wore. Of course, we all know what happened with the eruption of the French Revolution, his reign ending with the capture and beheading of both Louis and his lady who having been mightily miffed despite saying, ‘Let them eat cake!’ now decreed, ‘Let them eat cack!’
The diamond later passed through the Hope family (from whom the diamond now carries its name) until it was purchased by French broker Jacques Colot who then became insane and committed suicide. And then, Russian prince Ivan Kavitowsky loaned the diamond to an actress who was subsequently shot dead the first time she wore it.
We say, that is some serious curse power these priests placed upon it! Though many who have heard these tales have called these incidents into question saying, ‘What utter tosh! Have you been drinking again?’

Grigori Yefimovich Rasputin, commonly thought to be a Welsh lad from Aberyswyth, was actually a Russian mystic and peasant said to have wormed his way into the confidences of the Russian Royal Family – the Romanov’s at the beginning of the twentieth century. Employed as the healer for Tsarevich Alexei, again not from Wales, was the only son of Tsar Nicholas II and his wife Alexandra, Rasputin then found himself on the family’s hit list when it was discovered that he had been helping to discredit the Tsarist government.
He proved to be much harder to get rid of than anyone had anticipated, particularly nobleman, Prince Felix Yusupov, who subjected Rasputin to a grim, painful death when he first poked him with a stick before poisoning and then repeatedly shooting him. When these failed to work, Felix beat him, but after finding Rasputin still alive, dumped his body into a river where he eventually caught a heavy cold, sorry I mean, drowned to death.

Stories surrounding Rasputin’s death claim that he placed a curse upon the Romanov family during his ordeal, swearing that they would die violent deaths before the year was out. Sur enough, less than a year later, the entire Romanov family was murdered, sparking the end of the Romanov dynasty anyway and inspiring the caterwauling 70’s pop beat combo Boney M to sing, ‘Rivers of Babylon’…ur…no…that should read…..’Rasputin’.

Last but not least in our list of cursed objects comes the Winchester House in California. Built by the widow of legendary maker of the Winchester rifle (Mrs Rifle?) and also known as ‘The Gun That Won the West’ it was said that the Winchester family and its fortune were being haunted by the spirits of American Indians and others killed by the Winchester rifles. The untimely deaths of both her daughter and husband were said to be proof of this (we are inclined to believe her!)
In a bid to appease the spirits, she began construction of a great house in which to house them. Going by the notion that as long as construction of the house never ceased she could also ensure that her life would be spared by confusing the spirits, Mrs Winchester hired carpenters to work round the clock, increasing the eight-room house into a seven-story mansion ( a bit like our Editor’s house but without the servants quarters)
Containing 160 rooms, 2000 doors, 10,000 windows, 47 stairways (some of which lead nowhere), 13 bathrooms, and 6 kitchens! All to confuse the angry spirits! (On second thought, maybe it wouldn’t be a good idea after all!)

Anyway we only mention it because of The Possession being out this week.