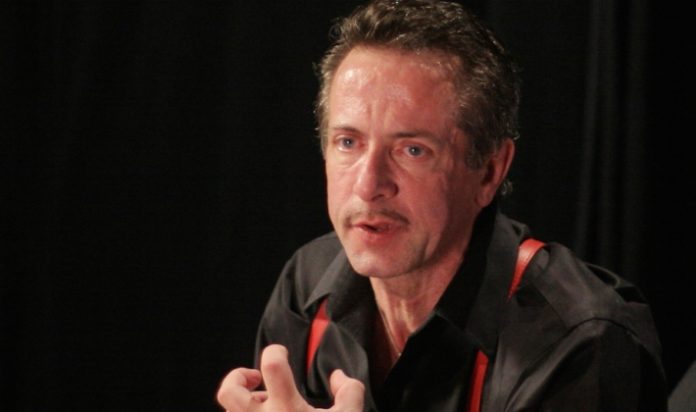 “I am not liked by the censor,” announces Clive Barker. Then he corrects himself. “Sorry. They don’t like the word censor, they like the word classification,” he grins, “but what it amounts to is censorship all the same.” The best-selling horror scribe has had a bit of a rough ride from film censors over the years, with cuts made to his Hellraiser and Candyman films and now some lengthy trims to the gore scenes in his latest macabre opus, The Midnight Meat Train.

“As a painter, as a photographer, and as a writer I am untouched by the censor,” he continues. “I think an editor once put one purple line through one sentence because she said it just went too far. It was a piece of anilingus with a monster, which I think she objected to. Otherwise I haven’t had any real trouble. But it is just not the case with movies.”

Clive has lived in Los Angeles for many years and he’s over here on a whistle stop tour to bang the drum for the theatrical release of Midnight Meat Train. The movie was funded by Lionsgate and its American release proved to be somewhat underwhelming. He’s hoping that things will prove different in his native country, but doesn’t seem too optimistic. “The trouble is that there are too many cooks in the kitchen in the first place,” he sighs. “Once you’ve finished the movie you’ve got a bunch of new people coming in with their own views… very often people who have no emotional commitment to the material. They haven’t been through the whole wretched stop and start and stop and start business of making the movie. They don’t understand what it takes to put one of these movies on the screen. It gets up my nose, and one of the great things about DVDs is we’ve at least been able to get a view of what goes on when the lights are turned off, as it were.

“We should be able to show all this, and reviewers should realise, ‘Oh my God, these people really do put love and trust into this process.’

Because it isn’t all about filthy lucre, you know. It isn’t all about dollar signs. It’s about people wanting to make good movies. Ryûhei Kitamura made a fucking good movie with Midnight Meat Train and it wasn’t an easy movie to make. And the idea that the guys in the suits, in this case a guy from Lionsgate, should come along and say, ‘OK, that movie was made by the other regime, the regime that preceded me, so therefore, fuck it, this picture goes out to 100 screens and they’ll be at one dollar theatres. In other words the price of the show will be one dollar. So I had to drive 70 miles from LA to see my own movie on the night that it opened. And that’s heartbreaking.

“Maybe it would have been different if that Lionsgate guy had been able to see all the information, been able to see what a day was like working on a fucking train on a gimbel with blood-slicked floors and people doing all kinds of wire work and so on, and then the computer coming in and playing with that. That’s complicated stuff, and you would expect people to be a bit more fucking respectful of the fact that that work has been done, but they’re not.”

Midnight Meat Train is an adaptation of a short story from Volume 1 of Clive’s ground-breaking Books of Blood collection, originally published in 1984. It has taken a long time to bring it to the screen and the results are sure to please all die hard Barker fans. Alias star Bradley Cooper plays a New York photographer who accidentally stumbles across a psychotic and extremely bloodthirsty serial killer who is slaughtering passengers on a late night NY subway train. Our own Vinnie Jones is the splatter-happy maniac and those uncharitable souls who’ve slagged off the picture tend to point out how unlikely it would be for midnight subway trains in New York to be utterly deserted, allowing Vinnie free reign to chop and mutilate. Hey folks, this is a horror movie, so cut Clive some slack, eh?

I personally really enjoyed the ride and it’s easily one of the best movies of Clive’s work to date, the best thing about it being the extreme gore on show. This is a ‘proper’ horror movie and not one of those toothless teen-slanted PG-13 efforts that are all too popular these days.

“PG-13 horror films are ridiculous,” agrees Clive. “They are a contradiction in terms. How can you have a movie which is supposed to be horrifying, which is for 13-year-olds? It doesn’t make any sense to me. It’s like saying, ‘Let’s remake the Parent Trap but let’s remake it for the Hip Hop audience.” He pauses a moment. “Maybe I shouldn’t have suggested that, because now they will probably do it!

When I suggest that The Midnight Meat Train is “A horror film for horror fans” he seems grateful for the comment. “Thank you, that’s beautifully said, and it is. Many of the Books of Blood stories are that. They are stories which were written with a fanboy’s heart and I make no apology for that. I don’t think there’s any need to water them down and I’m excited as hell about the idea that you can make these movies work on lots of different levels and people can come in and have a great time just watching the hell being beaten out of other people… and violent death and all that.”

His old pal the censor didn’t agree of course, and cuts had to be made before the picture hit cinemas. But the good news is that there’s going to be two and a half minutes of extra footage on the DVD.

“There’s lots of bits of what I would call information, clues to the mystery that lies behind the meat train murders. You’ve read the short story so you’re pretty familiar with what they are, but even in the short story they are left deliberately obscure. The idea was that if this picture was a success then I had already written, in treatment form, numbers 2 and 3. That would have finished the whole arc off properly, so at the end of it you would have been able to say that, ‘Barker wasn’t just bullshitting his way through all that, there was a reason behind this.’

“That’s actually the biggest frustration of all. The rest of it is money and I think you know me well enough by now to know that I’ve never been in this industry for money.  I’ve gone where my instinct has told me to go. When I did my book The Thief of Always, there was a huge hue and cry of all kinds: ‘Oh God… Barker has turned his back on the genre that everyone loves him for!’ But I reminded them that the first book of mine they bought was actually Weaveworld, which became a number one bestseller. Where was the horror in that? I think there was some pretty dark supernatural stuff in there, but it wasn’t horror fiction in the pure sense. In my view you should take your imagination in all directions.” 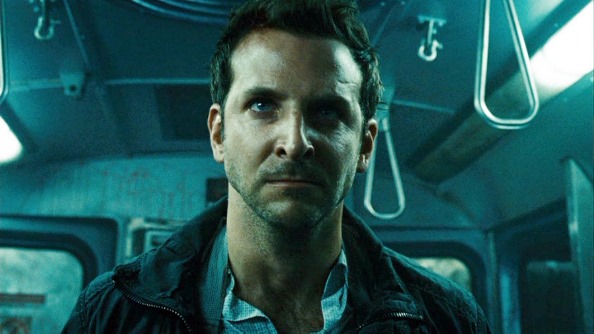 When I ask Clive whether he prefers writing books to making movies, he muses for a few seconds before coming back with, “Absolutely. I’m going to get a little metaphysical on you, so forgive me at this point, though I’m not very good at metaphysics in the morning – that would be a great title for a book, come to think of it! The truth is I feel as though I was put on the planet to tell stories. I don’t know who put me there – that’s where the metaphysics comes in – and why, but I do know that from the very beginning that was what I was destined to do. I instinctively knew how to construct stories that would make people feel things. When I was a little kiddie, my brother Roy and I shared a room. My brother is many years my junior, and on Saturdays and Sundays when Mum and Dad were in bed they would have a long lie in until about eleven – in retrospect it might have been more than a lie in, but I didn’t know that at the time. I would tell stories to Roy and I could scare him and make him cry. It gave me a wonderful sense that by expanding the language in which I was telling my stories I could take him to take him to new places emotionally that he hadn’t been in before, and that’s magical to me to be able to take him to a place where he’s actually crying about some invented creature’s death.”

Regarding the many movies made from his works, he says, “I think Hellraiser 1 2 and 3 all have good shit in them. They are very good.  I’m not going to play any favourites and say mine was directed the best. I think all three of them are good. As for the other Hellraiser movies, I’ll be honest, I haven’t seen all of them and those I have seen sort of blur into one another. I think Mick Garris did a nice job on Quicksilver Highway, and The Forbidden (filmed as Candyman) turned out to be better than I had anticipated and I was very impressed by that… and also scared by it too.”

Though Clive doesn’t intend to get back behind the camera anytime soon – he’s too busy writing and painting – Barker fans will be well catered for with two further adaptations of his gory short stories.

“We’ve already shot Book of Blood, the wraparound story, which was directed by John Harrison (Tales From The Darkside: The Movie) and my sometime intern Anthony DiBlasi is now directing his first picture which is Dread, another of the Books of Blood, and a story that people like a lot.”

Also coming up is a remake of Hellraiser to be made by Pascal Laugier, who did the controversial Martyrs, and 2010 will bring the possibility of a big screen adaptation of The Thief of Always. Meantime he hopes that British horror buffs will make Midnight Meat Train a DVD hit.

“The critics in America tore it apart,” he sighs. “They are like pack animals. One smells blood and they all smell blood, and suddenly there’s a feeding frenzy. It just drives me nuts.” 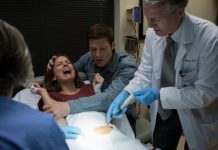 Interview: Radio Silence (the collective behind Devil's Due) 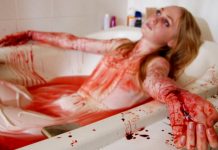 The View From The Blog: The Making Of HERETIC – a conversation with the Mod Collective 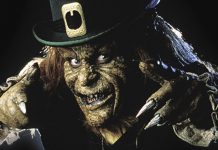