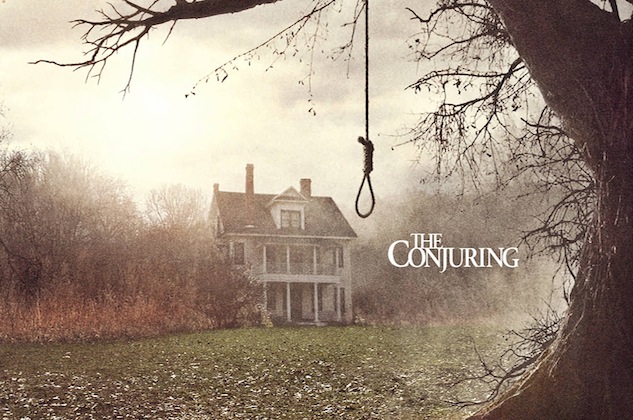 Another ‘based on a true story’ film this introduces:

Or  Paranormal Investigators, as they’re more accurately called, who help a couple and their 5 children in their newly purchased haunted farmhouse where strange happenings occur. Oooooooo spooky!!!

Yes this may well sound familiar, probably because the real life Warrens were the couple whose demonic dabbling bought The Amityville Horror to cinema’s attention, and storywise there is little that is different here.

This is unashamedly old fashioned and is helmed by the excellent James Wan ( Insidious, Saw) who knows a thing or two about scares. Wan has constructed some excellent and unnerving sequences, with an ominous and at times deliberately discordant score to add to the pervading air of menace, using only the occasional jump out and shout ‘BOO!’ type effect.

Not everything works, and impending  doom is flagged up early on. The Warrens keep relics from their investigations in an unlocked room in their own home to prevent them from causing bedlam elsewhere – so obviously nothing can go wrong there, right?  The family pet won’t go in the house so he’ll be safe, right?   And there are unintentional laughs when one of the daughters is hurled round by a demonic force  whilst one of the Warrens’ investigative team jockeys for the best position to film the goings on.

With the story’s characters being both credible and sympathetic  and sharing a bond over their concern for their respective children it lends the film an authentic feel and  Lili Taylor has one of the best role she ‘s had in a long time.

But with an ever increasing air of dread, the third act of the film goes into overdrive, throwing everything into the mix, culminating in whirling vortex of hysteria. Though the genre demands a full on climax it is this that is its downfall, with all that has gone before now spoilt by the unnecessary desire for the inevitable big showdown.

James Wan is clearly adept at this kind of thing and The Conjuring is more in the mould of Insidious than Saw, but the true life haunted house story has been well documented before and this, though competently put together , brings nothing to the table that fans of the genre won’t already already be familiar with.

The Conjuring opens on 2nd August.