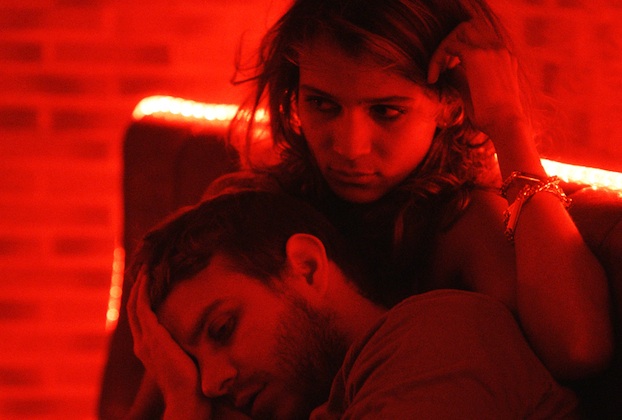 A sure way to attract attention in a written article is to have something lurid in capital letters. It’s a failsafe, and used by many tabloid headline writers wanting to draw your eye and sex is always an eyecatcher.

There we go, done it again this time with some gross out hint of violence. Something lurid is another sure fire way to catch the eye of the casual browser.

Well there’s nothing at all about that in this paragraph but it certainly drew your attention with its hint of lurid titillation, only to find that many films use the same pretext to draw attention to themselves – much like a parent watching their child smash your windows but telling you that you’ll have to excuse the destruction as he suffers from that well known catch all syndrome, ADHT.
Having either run out of exclamation marks or semi colons whilst getting the poster printed we now have SIMON KILLER. Those of you drawn to a film where Mr & Mrs Killer’s son goes on a bloody rampage as he goes about dismembering victims, furious that his parents gave him the middle name ‘Serial’ instead of ‘Psycho’ or ‘The’ will be disappointed. Instead we have the story of a post graduate student shuffling around a Paris made to look like a set knocked together by the local AmDram society.

Young Master Killer mopes about in an effort to get over the breakup of a long term relationship with an old girlfriend who clearly saw him as the navel gazing, Pot Noodle bothering yet clearly unhinged loon the title purports him to be.
Simon, as he never tires to remind us, has a degree in neurosurgery and has had a paper published, but rather than divert his attention into his work the clearly intelligent lad decides to cement Franco-American relations by paying for the services of his favourite prostitute at a local clip joint. Before long the staple stereotype that is the tart with a heart forms a relationship with the shoe shuffler and, he in turn, puts his genius to work coming up with the woefully poor idea of blackmailing her clients.
It’s pretty clear from the start that his attitude to women has barely progressed beyond adolescence but this is a character study and because it’s an art house film too there is plenty of gratuitous nudity and liberally sprinkled scenes of the pair rutting like farmyard animals which become increasingly tiresome and repetitious and are something of an… urr …… anti climax. He clearly can’t form a normal relationship with women and it’s a wonder that any woman finds the moody, unshaved sociopath attractive.
Simon Killer is not a bloodbath at the house of death but rather an arthouse study of psychosis and the lead played by an excellent Brady Corbet who clearly deserves better than suffering some of the ignominies heaped on him here including having a prostitute shove her thumb up his bum in one scene! But unlike the title this is all pretty anaemic with only the central performance occasionally redeeming it. Perhaps Simon Stroppy might have been a better title.