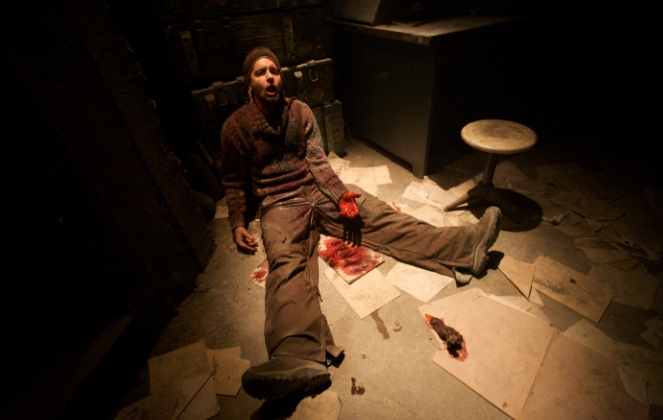 It used to be that horror films were released in the autumn, then around Halloween more and more. Winter has become a big release date as well now, with February and March often carrying horror titles in cinemas.  With new horror films being produced constantly and released every week to DVD in the U.K., however, theatrical windows are becoming shorter and shorter, sometimes non-existent. And many are looking to premier at Frightfest and then get 0ut to DVD as quickly as possible.

In such a crowded market it can sometimes be hard to stand out from the pack.  It can also be difficult trying to overcome received wisdom, and The Dyatlov Pass Incident faced both of these fights.  It definitely seemed to split the audience down the middle at Frightfest, but some qualities are undeniable.  Firstly, that former action blockbuster director Renny Harlin has not lost his chops, especially given he cut his teeth on horror films (Prison, A Nightmare On Elm Street Part 4); and secondly, that many reviewers in the U.K. have long since stopped considering U.S. characters in these sorts of films with anything other than thinly-disguised racism.

Yes, this is a “found footage” film, but it has ambitions beyond the confines of that limited subgenre.  This is a proper film with proper actors and proper direction, making great use of real-world locations that were clearly freezing, and showing real restraint in the doling out of scares. There was one early on in the far background left of the screen that over half the audience in the Empire Leicester Square didn’t even notice due to careful composition misdirecting the audience, and the few of us who did gasped and turned to each other to make sure we had not hallucinated it.

The plot may be traditional – U.S. students aim to make a documentary about a real-life spooky incident – but the character types and their interactions are all depressingly realistic to anyone who has ever met these sorts of people in real life.  Refreshingly, the two most experienced characters start questioning the sanity of their undertaking early on, and their issues grow rapidly the further up the mountain they get, mitigated mostly by sexual interest.  The kills are not predictable, nor which characters will go when and why, and Harlin commands the frame as he always has, letting the scope of the winter mountain landscape frame the actors’ increasing desperation.

The final act inside a seemingly-abandoned Soviet base is everything it should be, a genuine elevation of tension and scares leading to a full-on sci-fi finish that nods to the kinds of genre-twisters that used to be the staple of such TV shows as The X-Files, The Outer Limits or The Twilight Zone.  It even offers a genuinely emotional undercurrent to said ending, which is far more than most films in the subgenre can be bothered to do.  This is a film that remembers to offer more than mere cyphers acting as audience stand-ins for a thrill-ride, to be a drama as well, to make you feel and empathise with unlikable people out of their depth caught up in greater forces than they can comprehend, Cold War debris of the kind that made for great adventures in Warren Ellis’ brilliant comic Global Frequency.

The U.K. DVD and Blu-ray from Anchor Bay probably have great picture and sound, as well as carrying a ten-minute making-of and the trailer, but we couldn’t tell you about any of these as all that was sent out for a review was a screener carrying both this and another Anchor Bay release compressed on the one DVD.  The film is definitely worth seeing for those seeking more than surface thrills, but we can only hope when you put your hard-earned money down for the consumer disc, it presents it well.