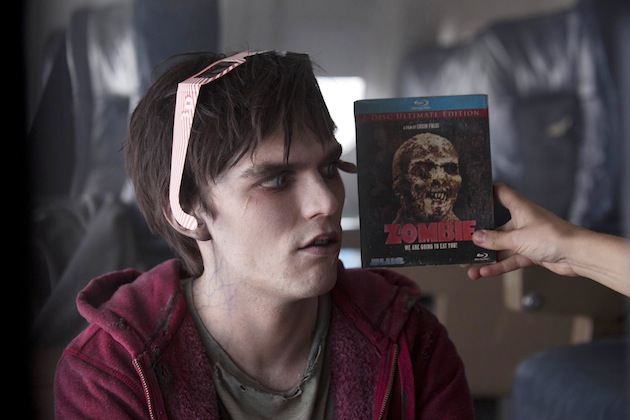 We’ve Simon Pegg & Edgar Wright to thank for the term Rom-Zom-Com back in 2004 with their brilliant Shaun of the Dead and it’s with trepidation that we now have a teen version of this. But it’s not as bad as you might think.

Warm Bodies is essentially a story of forbidden love heavily influenced by Romeo and Juliet, with the neat twist that Romeo is a zombie. In a post zombie armaggeddon, the remains of humanity live in fortified but desolate cities hiding from the legion of zombies looking for fresh brains to devour – which not only takes the edge off their hunger but also means they can absorb the memories of their victims. R, played by Nicholas Hoult, has vague memories of his former self and desperately wants to be human again. As his zombie posse scour the derelict airport where they live, they encounter a group of humans including Julie, ( Teresa Palmer). Preferring not to munch on her cerebral matter, he instead instantly falls in love with her, rescuing her from the fellow undead and leading her to safety in an abandoned passenger jet. After she realises she is not going to be a savoury snack, their relationship develops and ultimately zombies and humans unite and do battle with the Boneys, a motley assortment of skeletons looking like outcasts from Jason and the Argonauts.

The film is based on a seven page short story, ‘I am a zombie filled with love’ that was popular online, and the author Isaac Marion developed it into a novel in 2010. This is far removed from the world of gut munching zombie flesh eaters but does share the use of zombie as metaphor, as per George Romero earlier. Though clearly aimed at young adult females there is a lot to be enjoyed here notably the Peep Show type voice overs by R which make the first act great value.

This being the first zombie film of 2013 it’s a decent warm up for this year’s big budget zombie blockbuster, World War Z. It seems there’s an appetite for the undead with the film opening at Number 1 in the US box office last week. Both leads are likeable and it should find an audience here in the UK with those pining after the demise of the Twilight series.
Director Jonathan Levine (50/50), who also wrote the screenplay, handles it all with aplomb and the CGI is adequate, though the last scene is visually arresting.
This is not really aimed at hardcore gore hounds and that is reflected in the certificate. There are quibbles, mainly the shuffling zombie wrecks developing Olympian sprint abilities when they attack and when Hoult starts to regain his humanity only his ears seem to be still zombie purple. At one point after a comedy makeover he even resembles John Barrowman (who seems to be around a lot at the moment bizarrely popping up in Zero Dark Thirty!)

This is is quite fun zombie film aimed squarely at young adult females whose boyfriends should find something to entertain them too.