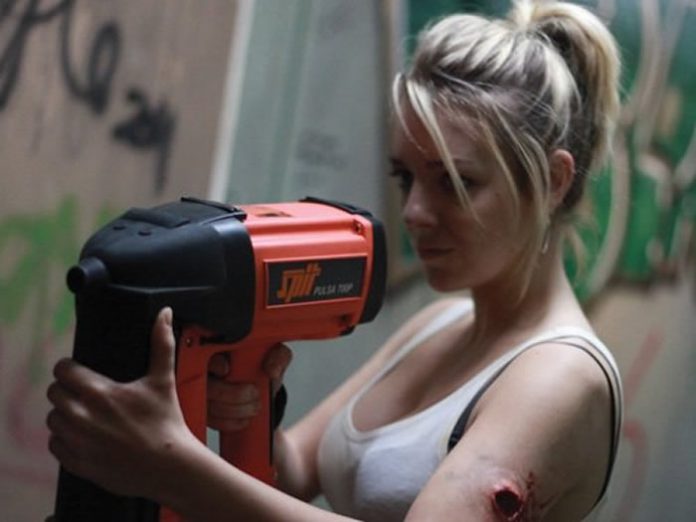 Following on from Rio Bravo, Assault on Precinct 13 and most recently, Attack the Block, this is the latest in a long line of movies involving a motley group forced together by circumstance against a seemingly overwhelming foe.

The plot here concerns a group of stubborn council flat tenants refusing to leave the top floor of a tower block for housing developers despite a youth being beaten to death in their corridor. One year later they find themselves at the mercy of a mystery sniper picking them off one by one.

Sheridan Smith’s Becky leads a disparate bunch including a mother and son, a retired soldier and his wife, an obnoxious chav mum, a couple of drug dealers and most notably Jack O Connell’s Kurtis who gives a great performance, all swagger and arrogance as he struts around as what can only be product placement for Duffer clothing. In turn both vile and amusing his ghastliness is only topped by Montserrat Lombard’s appalling Jenny who appears to be incapable of looking after her children without resorting to violence and verbal abuse. Despite the ever dependable Smith it’s O’ Connell who is the most compelling to watch despite his character being a somewhat less psychotic version of that which he played in the excellent ‘Eden Lake’.

The film touches on a number of social issues, drug use, child abuse, misplaced distrust of the police, social class and ultimately could be seen as some sort of parable. Written by James Moran ( they even manage to sneak a reference in to his last film, ‘Cockney v Zombies’) this is a taut low budget thriller which has been co-directed by Ronnie Thompson and James Nunn, an ex 1st Assistant Director, and shows promise. It’ll be interesting to see if they continue to direct as a team and if not what they will bring to future projects. They make good use of the single corridor set and the authentic air of filthy corridors, cheap processed food and alcohol pervades although this must be the first council block to have full working lights on every floor of the stairwell.

It’s a good debut for first time directors but it’s not a great stretch of imagination to guess the identity of the killer and it won’t be giving anything away to know that they nail him in the end.