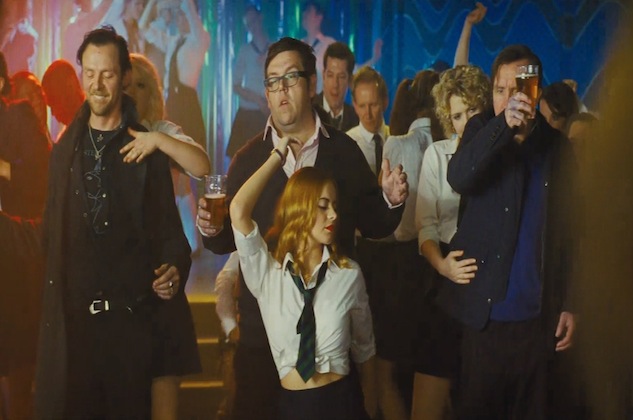 Where Britain leads, the world follows – utter rubbish of course, except for one notable exception. We gave the world The Pub Crawl. Where else can you see groups of (usually) men ricocheting haphazardly from one drinking den to another, taking in all the thrills of an ill-judged punch up, raucous caterwauling of Tom Jones hits and leering at women – rounding off the night by regurgitating a dodgy kebab? Australia probably. And it’s this touchingly picturesque scene that director EdgarWright and actors Simon Pegg and Nick Frost have used as the basis for their third film together, after their fantastic Rom Zom Com debut Shaun of the Dead and Hot Fuzz.

Pegg plays Gary King the leader of a group of schoolboys who, in 1990, celebrate the end of their school days by embarking on the famed  Golden Mile,  a pub crawl of 12 drinking establishments in their home town of Newton Haven, which ends at the appropriately titled World’s End – exactly what it feels like after 12 pints of Watney Red Barrel!  For one reason or another they never make it, and all move away and get on with their lives – apart from Pegg, whose psyche remains stubbornly trapped within an 18 year old’s mentality. He decides 20 years later to reunite the old gang to complete the drinking session they never finished. The others have grown up regard a drinking session as the last thing on their minds, and Frost is especially resistant to the idea of returning to his hometown for one last jolly. With so many pubs ahead of them things don’t bode well as the teetotal Frost insists on drinking pints of water. Old and unresolved conflicts between the group arise and the whole day goes askew as they realise that Newton Haven  is not what it used to be.

As with the two previous films in the trilogy, the first half is hugely entertaining, evoking memories through its use of a post 1989 Summer of Love soundtrack which is cleverly used to comment on the scene it plays over, whether it it be The Beautiful South’s ‘Old Red Eyes is Back’ or St Etienne’s ‘Join our Club’ – but most especially Primal Scream’s seminal Screamadelica album, notably Loaded with its looped sample – ‘We want to be free to do what we want to do and get loaded and have a good time’ – a mantra that Pegg’s character has taken to heart his whole life.  With Happy Mondays, Suede, Soup Dragons, Stone Roses and Inspiral Carpets featuring heavily on the soundtrack it’s almost a mix tape movie.  40-something’s going through a mid life crisis are sure to identify with the first  half of the film.

Wright is a talented director and has reined in the visuals he so adeptly displayed in his Hollywood debut Scott Pilgrim vs the World but it’s Pegg who is so good as a largely unsympathetic character looking particularly weathered in a role which differs from his normal on screen persona reeking of desperation as he tries to cling on to what were, in his eyes, better days as an adolescent  waster trapped in a 40 something’s body. Kudos must also go to Nick Frost as a one man whirling dervish when it comes to pub fights.

As the final part of their Cornetto trilogy – where the tasty processed cone of cream gets a literal throwaway appearance  – this is really more of a sister piece to Shaun of the Dead in its portrayal of the monotony of surburbia but also owes much to Village of the Damned and The Stepford Wives and even homages its own predecessors with the jumping over a fence shot.

It’s typically British, celebrating a love of the pub set against a background of 90’s nostalgia, but like Tarantino/Rodriguez’s From Dusk til Dawn goes off at an abrupt tangent the film’s latter half is not as strong as its first and ends with a scene that doesn’t really work but for all those wishing to relive a certain period when mortgages, marriage, children and debt were not even on the horizon, this is spot on entertainment.