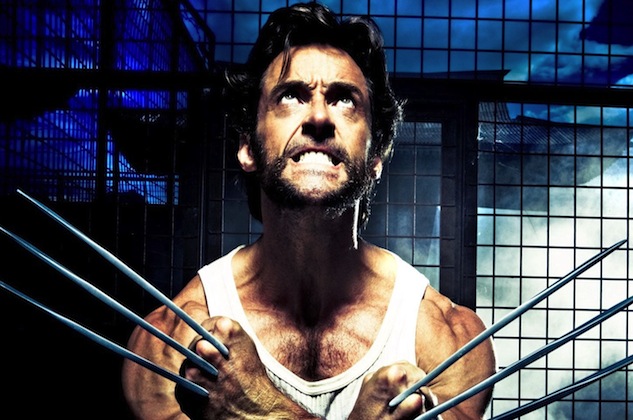 The late Sir Rhodes Boyson an ardent supporter of corporal punishment and unbeknown to the Tory Party was not, as is commonly thought, a Methodist Lay Preacher in his early life but incredibly the metal taloned muscle rippled hero superhero, The Wolverine. Yes it may seem incredible but consider the following evidence:

‘Cobblers!’,  I’ve been told, as well as ,’You’ve had quite enough to drink tonight sir. Please leave!’

Watching The Wolverine they may have a point, and not just because Sir Rhodes passed away in 2012 whereas the latest in the Marvel  instalment of the superhero makes clear that he is immortal. Noticeably more serious in tone than Iron Man this starts with our hero imprisoned in a Japanese POW camp. In Nagasaki.  During WW2.  With previous X-Men films having used German Concentration camps to set scenes it’ll come as no surprise what happens here.

Having saved one of the guards from the nuclear blast we fast forward to the present day where Logan/Wolverine is living an almost feral existence before another mutant, who seems to have a head made from a triangle, finally tracks him down.  Persuading him to travel back to Japan with her, he is reunited with the now elderly guard on his death bed. This guard has now gone on to become a fantastically wealthy industrialist and wants what Logan has: immortality – in exchange for the mortality he believes the superhero wants.

From here he finds himself embroiled in a power struggle by the guards dynasty whereby his granddaughter is kidnapped by the Yakuza and we’re off on a series of inevitable set pieces , flashbacks  and the Wolverine’s brief experience of what it is to be human as a rogue mutant has infected him so that he no longer recovers  from wounds inflicted on him in the numerous fights he becomes embroiled in.

With the much derided X Men Origins: Wolverine not performing as wished for, the filmmakers have gone back to the drawing board and come up with perhaps a more intense film than before. There are some funny throwaway lines, but nothing on a par with the hilarious cameo in X-Men: First Class.

The truly standout sequence is that set on a Tokyo bullet train as Wolverine battles with several Yakuza bad guys to astonishing effect, and it’s a shame that this is such a short sequence in the film as it is breathtakingly filmed. Where the film does suffer is the fact that a hero with 12 inch knives sticking out of his knuckles inflicts no apparent injuries on his foes and the ones that he does sustain are ultimately superficial despite being stabbed, slashed and shot at close range with large calibre weapons. And therein lies the rub. This would be a great 18 certificate film but when a studio spends a $100 million plus on a blockbuster it is not going to restrict its audience to those of 18 and over.  The fact that this is in 3D with a higher ticket price won’t harm profits either.

Inspired by, if not based on the apparent Japanese comic book saga that fans liked, this is an interesting diversion from the usual setting . There are moments where you can’t help compare to Kill Bill‘s House of the Blue Leaves sequence, but made for 12 year olds. So despite the slashing and stabbing there is little onscreen blood.

There is a not-exactly-in-depth look at the superhero’s immortality, and at the same time he is haunted by the spectre of deceased love interest Jean Grey. The theme of an elderly man’s quest for immortality (as in Ridley Scott’s Prometheus and Black Rain) is at least an attempt to be different. This is very much a boys’ film, but Jackman must be aware of his female fan base as there’s no other reason why he spends so much of the film frequently stripped to the waist and displaying a torso that’s clearly spent more than 10 minutes in the gym.

As usual with Marvel films, don’t be too keen to leave at the end, as a mid-credit sequence features two surprise appearances which set up next Summer’s new X-Men film. Not wishing to spoil anything, but it’s not Sir Rhodes Boyson.  It would appear thought  that the studio is more interested in the X-Men franchise than any further individual superhero films from the mutant hardmen.