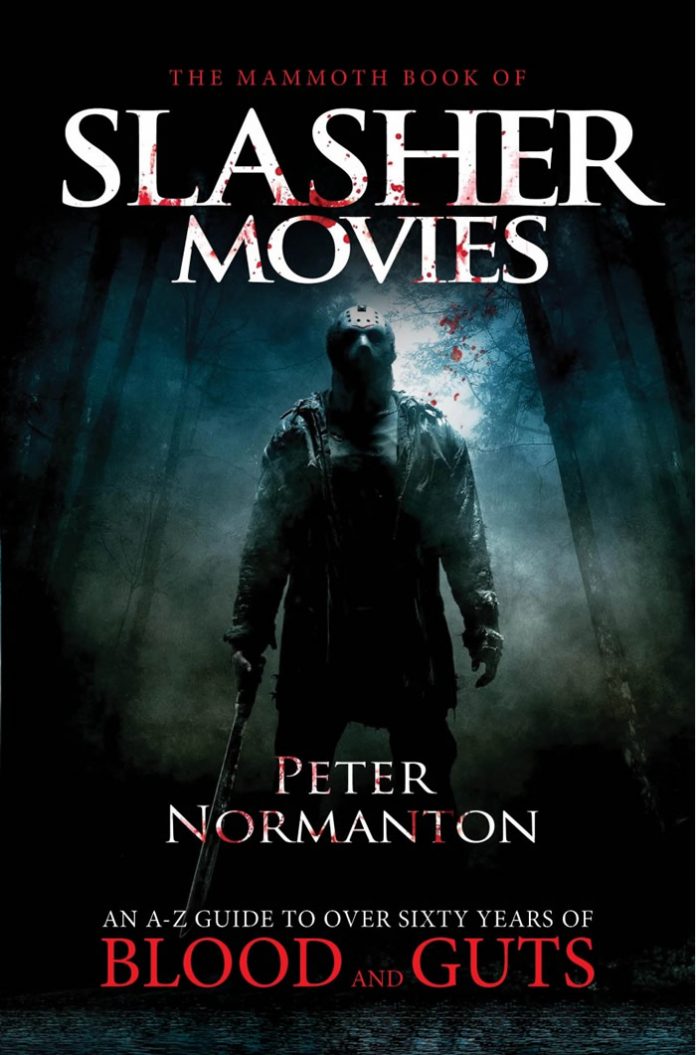 As someone who remembers the furore surrounding the so-called ‘video nasties’ of the mid-‘80s, I was pleased to discover that Peter Normanton’s Mammoth Book of Slasher Movies goes into forensic detail on the subject.

In an exhaustive introduction to the genre, Normanton gives the reader an in-depth history of ‘splatter movies’ and film censorship in general, right back to the early years of the last century. It’s fascinating stuff. What comes across strongly is in attempting to stretch the boundaries of taste and decency, these (mostly) young filmmakers had only one real weapon in their arsenal – their own passion. They had no money, no decent actors and, often, no real talent. Which is a polite way of saying that most of these notorious gore-fests are actually pretty crap.

There are some gems. The Driller Killer and I Spit on Your Grave are above-average thrillers, saddled with gimmicky titles. But once all the hype is stripped away, most ‘slashers’ are little more than sad and depressing home movies with amateurish performances and even more amateurish effects.

This book puts together several hundred of these efforts in alphabetical order. The first thing that struck me was the strangeness of some of some of the entries. For a genre that Normanton (rightly) claims was a product of the late 1970s and early 1980s, he includes such films as Hammer’s The Curse of Frankenstein (1957) and Dracula (1958), Peter Jackson’s gross-out Braindead (1992) and the quaint Agatha Christie whodunit And Then There Were None (1945). More puzzling is the inclusion of Ridley Scott’s superior horror flick Alien (1979) and Edgar Wright’s excellent zombie comedy Shaun of the Dead (2004). If this was a book about horror movies, then fine. But it’s a much tighter genre than that, and I would argue these titles do not really belong in the ‘slasher’ category.

The problem is that Normanton doesn’t offer any sort of definition of what a ‘slasher movie’ is. For a 500-page reference book on the subject, this is a jolly big omission. Surely it’s more than just a horror film? Also, terms that might confuse a casual reader are bandied around without any explanation. I consider myself more than a little knowledgeable in this area, but I’d never heard the term “gallio” before, which the author mentions in passing in his introduction then uses throughout the book.

Mainstream movies — Psycho (1960), The Texas Chain Saw Massacre (1974) — rub shoulders with the more outré offerings, such as Antropophagus and the notorious Cannibal Holocaust (both 1980). All the obvious titles are present and correct, with the exception of one of my favourite post-modern slashers, Identity (2003). Sequels and remakes are only referenced in the entry for the first film in a series, which is a shame because there’s much more to write about the Friday the 13th franchise than just the 1980 original.

Like any book of this kind, the subject matter is selective. Normanton says so much in his introduction. As such, and bearing in mind the odd inclusion of some decidedly non-‘slasher’ entries, this is another strong entry in the Mammoth series, which continues to explore interesting niche markets under the editorship of Duncan Proudfoot.