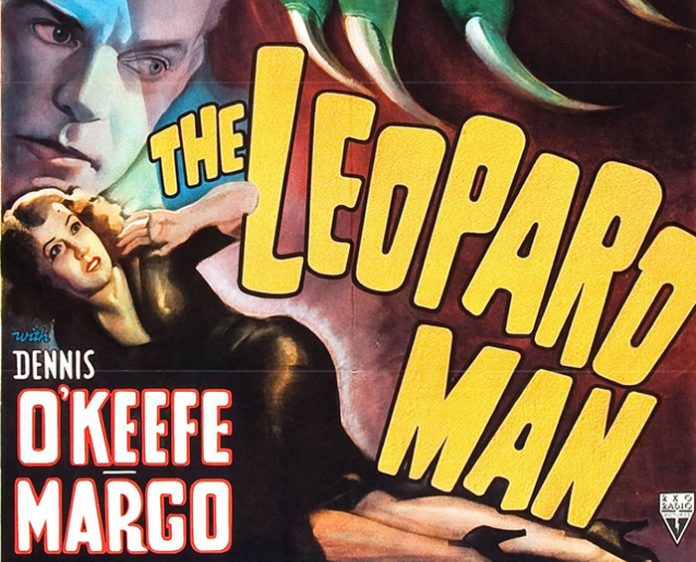 The ‘were’ picture came to prominence in Hollywood after 1941’s The Wolf Man with Lon Chaney Jnr., not the first lycanthrope picture but certainly the trailblazer. Shortly after that, any vicious, predatory beast’s DNA was up for grabs to fuse with human tissue: so there were ape men, cat people and a jungle woman. The appeal of these fictions lies in the fact that they gave their subjects an excuse to slaughter following some inhuman primal instinct, innocent victims fallen prey to animal urges. The Leopard Man from 1943 however, despite its deliberately misleading name, was one of the first US pictures to depict someone whose wild bloodlust was down to a diseased psyche, a serial killer as they would be termed today.

When a leopard manages to break loose during a cabaret show, the city mobilises into terrified lockdown until the creature is caught, especially when the frightened animal fatally mauls a young girl. Then more bodies begin turning up that ostensibly fit the MO of a carnivorous cat, but one that would almost certainly have fled to the open country by now. This, combined with the evidence of smoked cigarettes at each crime scene, provokes the question, what kind of person would do such a thing?

Whilst loath to delve too far into any psychological profiling, there is a jibe by one character pointedly referring to the owner of the beast’s predilection for getting drunk. And the rugged hero concedes that he may come across as aloof because he has learnt that it doesn’t pay to make known one’s true thoughts and passions. Everyone has a hidden side.

This ambiguity is underlined by a fantastic double bluff toward the end of the picture, as the assumed heroine stands off against the suspected villain in the local museum: she demands forcefully that he turn off the light and come over to her to ostensibly watch a festival procession, but as the shadow nervously steps forward, so her face blanches with anxiety. A moment of mutual dubiety.

Directed by the great noir stylist Jacques Tourneur from a novel by Cornell Woolrich, the suspense is kept taut like a panther in wait, especially as the leopard claims its first and only victim Theresa: as she pauses in an underpass, first rippling light reflected from a puddle and then strobing illumination from a clattering train drastically amplifies the terror in her face. And to not mention shadowplay in a discussion of Tourneur would be remiss: before Theresa’s venture outside, her brother teases her with a looming, feline hand shadow on the wall as dire omen; at her funeral, the dark figure cast across the room from a window cleaner provides an early clue that it won’t be an animal that will strike next.

Whilst certainly not as layered as his more renowned films, The Leopard Man nevertheless builds on Tourneur’s fascination with dark and light. Each individual soul carries with them a murky counterpart, black spots that, as for a leopard, cannot be changed.