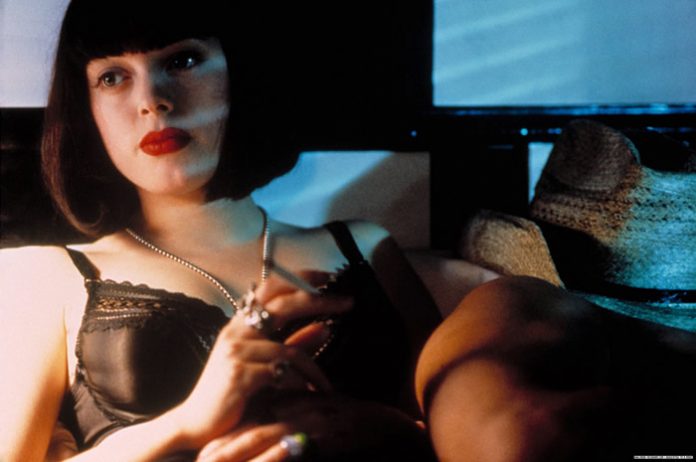 The response given after suspicious shopkeeper Win Cock Suk asks Betty Page look-alike Amy Blue (Rose MacGowan) to pick her cigarette up off his floor.

That response provoking the pulling of a shotgun on the insolent teenager and a demand that she and her boyfriend Jordan White (James Duval) pay $6.66 for the snacks they have consumed; in front of the counter a sign promises that SHOPLIFTERS WILL BE EXECUTED.

That response resonating as the drifter Xavier Red (Jonathan Schaech), that the couple have just picked up, sneaks behind the vendor and blows his head off into the condiment tray, the still-twitching noodle of Mr. Cok Suck now gurgling guacamole.

Eat my fuck indeed and say hello to The Doom Generation.

Making its long-awaited debut on DVD, Gregg Araki’s violent, surreal road movie is the second of his series of films known as the ‘Teenage Apocalypse Trilogy’ which depict slacker youth trying to make sense of a dumb, alien world through freewheeling bouts of hedonistic sex and excessive behaviour. Stylistically, The Doom Generation reflects this decadence: shot in a bright, candy-coloured palette, and with the motel rooms of black-and-white check or plush magenta that the protagonists crash in, the film runs riot in a frenzy of orgiastic design.

Initially tempering this, the trio travel aimlessly from place to space: stuffing junk food, getting stoned and blankly questioning the meaning of existence, they begin to start traversing the boundaries of heterosexual fidelity, at first for want of something to do perhaps, that then becomes a means of transgression. When Amy questions why she’s allowed Xavier to seduce her, he replies, “Guilt’s for married, old people”; Jordan’s face lifts to doped amazement when Xavier tells him about double penetration.

Constantly threatening this burgeoning ménage à trois are the hostile encounters they have along the way, inevitably ending in cartoonish savagery: a fast food worker that follows Amy to the motel room believing her to be an ex ends up having his arm shot off, lying in the asphalt clutching his stump and singing ‘You are my one true love’; a silver-permed glam-rocker points a sword at Jordan’s crotch promising to “lop his dick off like a chicken head.”

This gruesome absurdity peppers the film throughout until the climactic scene when a gang of right-wing thugs break into the warehouse where the trio are sleeping. Draped in an American flag and proudly sporting a daubed swastika on his chest, their leader proceeds to mete out extreme punishment to the Red, White and Blue ‘deviants’ cowering before him- the action glimpsed in strobing frames, snatches of gory mutilation palpitate ever faster as violence intensifies. After the previous 70 minutes of anarchy, the abject terror of this sequence becomes all the more defeatist, Amy’s assertion at the very beginning that there’s just no place for them in the world having become cruelly ratified.

Full of no wave attitude, heady sexual corruption and empty despair, The Doom Generation is best summed up by Amy Blue. “Eat my fuck…”

Extras: Commentary with Araki, Schaech and Duval where they admit that they were stoned pretty much throughout making the film; Detailed interview with Araki from last year where he describes the project as his Nine Inch Nails movie. JK.