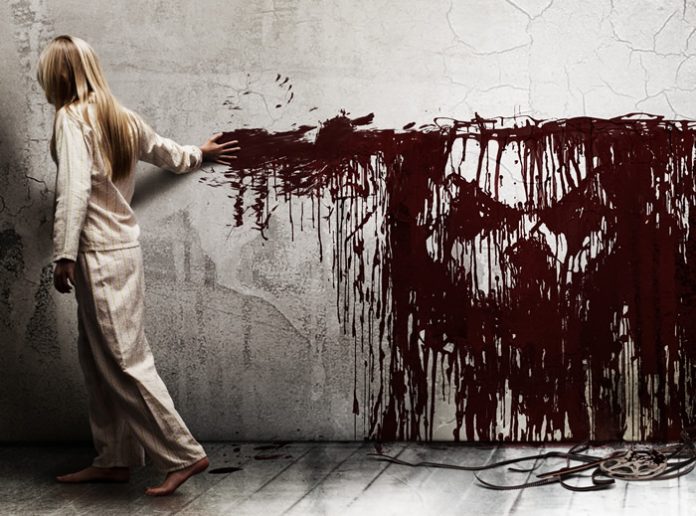 Some film makers vehemently dislike film critics, often regarding them as little more than failed and consequently frustrated film makers themselves. So it’s rare that the critic gets to put his head above the parapet and make the film they believe is better than the films they’ve had to watch over the years. And it’s here that critic and self professed film geek C. Robert Cargill has written the horror film he’s wanted to see.

Ethan Hawke portrays a true crime writer, Ellison Oswalt, who’s desperately trying to revive his career having not had a bestselling book in years. With money at a premium he moves his young family into a cheaper rented house. The locals shun them because, unknown to his wife and children, Hawke, as research for his next book, has deliberately moved them into a house where a family were slaughtered – except for the young daughter whose body was never found . It’s in the attic where he finds a mysterious sets of Super 8 films that he begins to uncover what has happened.

Cargill has clearly benefited from his years as a film critic, knowing what does and doesn’t work, and has drawn on many influences. But he has been wise not to directly plunder other films in the genre, choosing to construct an interesting supernatural backstory to hang his scares on. Between him and Director & Co Writer Scott Derrickson ( ‘The Exorcism of Emily Rose’) they put together some very effective scares, perhaps none more so than the series of Super 8 films which juxtapose jolly scenes of families relaxing at home with their brutal and graphic murders in a queasily effective manner. The film ratchets up the chills and alternates them with a couple of superbly orchestrated jump out of your seat moments. It’s all assisted by a creepily effective music score by Christopher Young (Hellraiser, The Grudge, Drag me to Hell). Far from being the traditional music you might expect from a low budget film, Young has used an experimental, almost avant-garde type sound track not dissimilar from that you’d expect to hear from someone like Phillip Glass which is all the more effective in its use here.

There are moments which are somewhat hokey: Hawkes’ character does most of his writing at night and what do you know, the attic starts creaking. Is there someone up there? So what does he do? It’s a horror film so it’s obligatory that of course he has to go up there and look around. Equally it seems that he’s incapable of wandering around the house in the middle of the night without making a racket yet bizarrely the family never seem to be woken by his nocturnal noisiness.

But these are minor complaints and Cargill has employed everything a first time writer uses to get his film made – a genre with a large fanbase: horror, a small cast: 6 main characters, one set: the house, attracting a household name to star: Ethan Hawke, and the essential small budget: – and in fairness for the most part it works well. There is surprisingly little bloodshed for a horror film and instead it relies more on atmosphere to achieve its highly effective chills. The murders make particularly grim viewing and are shot in such a dispassionate way as to make them all the more effective. It’s a writing debut that Cargill should be justly pleased with, and most horror fans will be too.