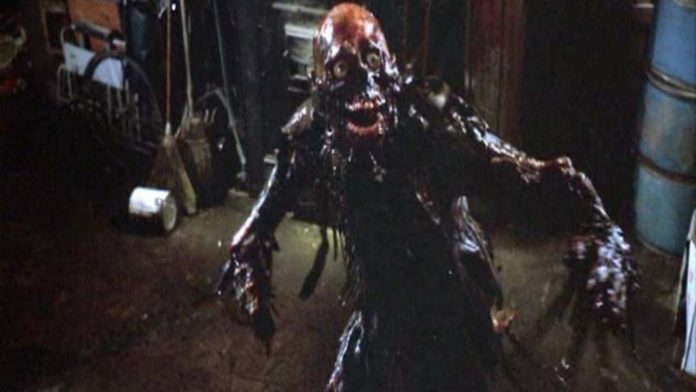 Upon revisiting Return Of The Living Dead, it becomes apparent that there is an inconsistency in the history of modern zombie cinema. Whilst George Romero is pretty much considered its sole founding father, it could be argued, and it’s going to be, that Dan O’Bannon should share that accolade. Based on a novel by Night Of The Living Dead’s co-writer John Russo, the plot follows the classic set-up pioneered by that film whilst briefly providing explanation for it.

Turns out the epidemic of Night was the result of an army experiment gone wrong and a couple of containers of toxic waste were left over in the basement of UNEEDEM medical supply warehouse in Kentucky. When an employee called Frank accidentally unleashes the contents of a barrel, it’s not long before it gets in the air, a sudden downpour not only spoiling the graveyard party of a bunch of punks, but helpfully raining down some reanimation juice. The living fend off the dead by boarding themselves up in the local mortuary and it becomes a protracted game of hopeless survival.

After the project’s initial director Tobe Hooper left to make Lifeforce, O’Bannon, who had been brought in to tidy up Russo’s script, was asked to man the chair: he agreed on condition that he do a full rewrite. His strategy was simple- total revision of Romero’s cinematic tropes. When the initial cadaver comes to life whose (second) death will trigger the rising from mass graves, the hapless Frank and his colleagues panic over how they’re going to deal with it. He remembers about the headshot, but this jaundiced, bald ex-mortal keeps coming until they comically manage total dismemberment. “I thought you said if you destroy the brain it dies,” Frank’s boss hollers. “It worked in the first movie!” The head grins and wriggles on the floor.

This cheeky subversion permeates the film like a rogue infestation. O’Bannon’s creatures are fast, strong and intelligent, using CB radios to call for emergency back-up as one would order takeaway and winching doors off hinges when potential victims hide in lockers. Whereas Romero’s zombies were hordes of featureless stragglers occasionally differentiated by memorable make-up or costume, here they are characters in their own right: who can forget Tarman’s sticky putrescence or the overripe female half-corpse that articulates the pain of being dead? And this is O’Bannon’s most radical difference- humanity. The conscious undead feast on brains, the protein-hit providing fleeting respite from the excruciating process of decomposition, in contrast to the flesh-eaters that just greedily, inexplicably chow.

Return Of The Living Dead also disinters a swollen vein of anarchic humour that had been absent from the genre, alongside a fair amount of gratuitous nudity. O’Bannon’s rebellion against what had become the status quo is enough to define the term ‘splatterpunk’.

It has been well documented that Romero lost the rights to refer to his creatures as per the title of his 1968 classic, but this differentiation could be useful when thinking about zombie cinema. On the one hand, there are the Dead films, senseless apocalypses of shuffling unstoppability. On the other, the Living Dead, lively cataclysms of cadaverous insurrection, the creatures dangerously energetic, human, maybe even comic. Romero and O’Bannon. Founding father pioneers.

Extras: Everything you wanted to know about ROTLD (but were afraid to ask): two-hour making-of documentary that gives the sense of the production being like a battleground; Extensive looks at the two sequels; Music video; Interviews with Russo, the FX artists, music consultant and the laconic O’Bannon, one of the last he gave; Ernie’s Notepad, 20-page replica notebook by the character of embalmer Ernie Kaltenbrunner exclusive to Blu-Ray steelbook. So comprehensive you’ll want to eat brains.