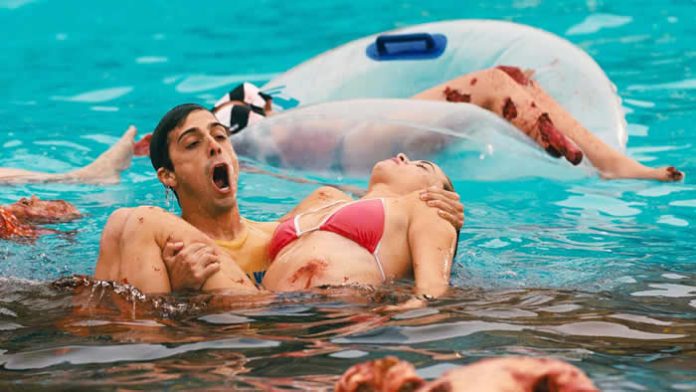 Horror in 3D has always had a bit of a chequered history having both embraced and exploited the latest gimmick. The 2010 remake had entertaining characters, amusing cameos, inventive deaths, gory effects and used 3D sparingly. The punningly titled Piranha 3DD throws some topless beauties into the mix, but what sounds like an unexpurgated adult breast fest unfortunately turns out flat on just about every single level. For a film that sells itself so knowingly on its ‘Double D’ moniker it will leave even the most internet access deprived 13-year-old boy disappointed.

This time the action moves to a nearby water park as the events at Lake Victoria have left the resort a ghost town during Spring Break. To boost business the co-owner of the water park has introduced a topless zone as well as busty yet hapless strippers as lifeguards. So on opening day, what could possibly go wrong? Oh yes, he’s decided to save money by channelling water from an underwater lake – which houses the prehistoric Piranha.

The fact that Piranha 3DD limped into UK cinemas and lasted barely a week before sinking without trace speaks volumes. Budgeted at $20m it barely made half a million on its opening week in the US. Piranha 3D got it all right but this got it all so very wrong. Even though it was actually filmed in 3D as opposed to being converted like its predecessor, it seems two-dimensional and barely warrants the effort of being made or watched in that medium (or indeed watched at all !)

The opening scene sets the vulgar tone – an exploding flatulent cow – and from here on in it seems unsure whether it should play for laughs or scares, mostly failing on both. Gary Busey is dragged in for a woeful cameo and David Hasselhoff puts in an appearance too, presumably because he believed that if he could reunite Germany by singing on a wall (‘I’ve been looking for freedom’ ) he must be able to save a simple low budget film.

For some reason unknown to anyone but the writers this completely ignores the payoff from the last film and decides to go off on its own pitifully weak way, taking in a tepid secondary story of unrequited love and some sort of blackmail storyline involving a corrupt deputy sheriff who looks like the Milky Bar kid’s bastard offspring. Even without watching the film you could look down the cast list and correctly guess who’ll die an unimaginative death by poor special effects. The piranhas look exactly like the lumps of flapping plastic they so obviously are.

In its quest to up the ante, the film has decided to include the gruesome highlight/lowlight of one of the cast castrating himself, although The Hoff caterwauling his way through his own composition, ‘Love Hunter’ runs it a close second. Indeed it’s hard to tell whether The Hoff has any self awareness at all, though in the extras he accurately describes himself as a ‘washed up TV star’.

Many of the names from the original return: Christopher Lloyd doing his Doc Brown from Back to the Future, Ving ( ‘Bring me my legs’) Rhames as the now-amputee sheriff who has the only really funny line in the whole film, and the there is Gary ‘Bonkers’ Busey – watch Busey’s Bloopers to see just how certifiable he is.

The movie adheres to the old 80’s horror film adage that sex is punishable by death but also lifts a scene direct from the original Nightmare on Elm Street to no notable effect. There is also the cliché of a character overcoming his fear of water at a pivotal moment. Yes, it’s astonishing to think that it took 3 scriptwriters to hammer out this guff. Things are left open at the end for a sequel with a frankly ludicrous plot development which will leave no one wanting for more.

The extras on the disc are truly bizarre and it’s hard to choose between The Hofftastic World of The Hoff, Busey’s Bloopers, or perhaps most pointless and unrelated of all a short film called, A Lesson with John McEnroe, who spends ten minutes cursing his way through a game of tennis for no apparent reason at all. The rest of the extras are the run of the mill commentary, deleted scenes, and previews of 3 other titles. There is a novelty in being able to watch a film in 3D in your front room but there are far better titles to enjoy at home than this effort. In fact don’t even bother with it in 2D.