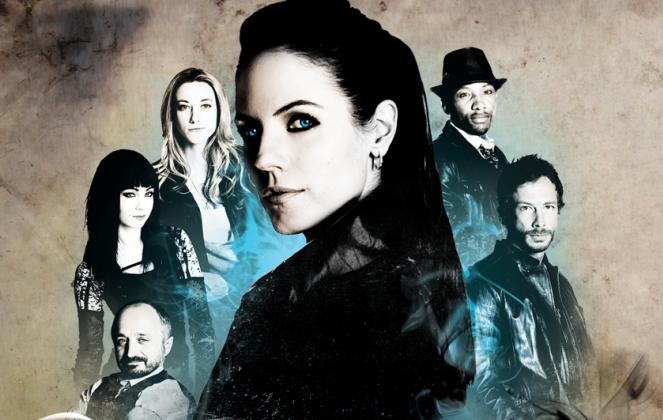 Please note: portions of this review were originally published at Cult TV Times.

Perfect 90s-style high-concept action-horror, Lost Girl is a Canadian TV series following the adventures of a half-human, half-Fae (as in Faery) woman with succubus powers. Debuting in the 2010 season with a 13-episode series, the second season was commissioned at full-length with 22 episodes, all on this DVD release. That debut year puts it right at the leading edge of the current wave of North American horror telly, as well as also beating the current crop of Fables rip-offs – Grimm, Once Upon A Time – by a year. All credit to creator Michelle Lovretta for getting ahead of the curve with an original project.

The Fae set-up, reminiscent of Kindred: The Embraced, gives a mafia sheen to a mythological set-up that draws liberally on Irish myths to begin with. In this second series it expands to take in more from Russian, Greek, East African, Phillipine myths and more.  In this the creators clearly wear their Neil Gaiman fandom on their sleeve, which is no bad thing.  In fact, the comic-book-style artwork animated as part of the opening sequence mark this as very much a “graphic novel”-inspired production. The cross-species sex and private investigator angle will remind some of Laurell K. Hamilton’s novels, but this achieves a balance between elements that only her earlier novels possessed.

Epic series arcs threatening all of Fae-dom allows for us to spend this series getting to see far more of Fae politics, clans and powers beyond the “creature of the week” format, although that is kept for most of the series until the “Big Bad” coalesces into the central storyline over the last 5 or so episodes. While you could dip into any one episode for most of the series and have an enjoyable viewing experience, the serial threads definitely come together in a very satisfying manner, raising the stakes for everyone with a lot of blood to be spilt (some even from series regulars…). We also get to learn a lot more about everyone’s backgrounds, with new characters are filled in well, some of them making a big impact in a short space of time.

Where the show excels in this second season is in its increased horror elements. While the first season tended to rely on CG effects more, letting magical powers do the damage, this season has far more hand-to-hand combat leading to some serious blood-letting and decapitation of various body parts. They also start to combine some of those with the series’ numerous sex scenes, once huge no-no in the U.K. thanks to the BBFC, but now only earning a 15.

It’s as if the producers used the first season to test the waters on how far they could go with sex, language and violence, then ramped it up this series, which is no bad thing at all. While the production clearly maintains a no-nipple rule, this is a show that still knows less is more, and when to play for camp and when to get serious, following up emotional consequences to physical actions over several episodes. Even a genre sex symbol like Emannuelle Vaugier gets a sexy scene that turns into a hysterical send-up of such moments, embodying the sort of comedy Lost Girl is so good at. 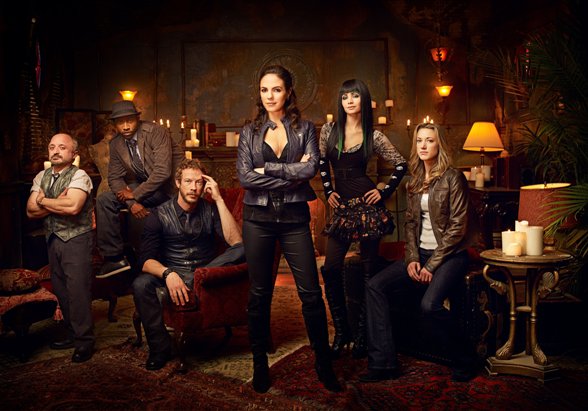 Said good humour is in evidence throughout by how game the cast are for just about anything. They get to exercise every performance muscle this season, and while genre shows never get awards kudos, the entire cast, guest spots and all, deliver above and beyond for the cause of quality genre entertainment. Anna Silk, Ksenia Solo, and Zoie Palmer are a fantastic set of leading ladies, easily outdoing similar ensembles elsewhere in cult TV. Kris Holden-Ried, K.C. Collins and Richard Howland provide solid and varied male support. Genre regulars Vincent Walsh, Aaron Ashmore and Raul Trujillo join the aforementioned Vaugier in spectacular recurring roles, while even some of the smaller guest roles make real impact in a short space of time. Everyone gets the tone the producers are going for here, and they nail it episode after episode – very impressive indeed.

The lack of extras and the dispersal of episodes across five discs allows for excellent standard definition picture and 2-channel surround sound. A Spanish dub and an excellent range of subtitles make this an internationally-friendly package. The high definition version with 5.1 sound is available on Netflix UK & Ireland however, and comparison reveals the limits in the surround sound picture, while the image is tighter, brighter, with great colours and textures.

None. The North American blu-ray Season 2 release has nearly an hour of behind-the-scenes featurettes and interviews.

The true inheritor of 90s North American genre television, Lost Girl is perfect for horror fans, telefantasy fans and libertine adults weaned when young on Buffy, Angel and Charmed; prudes need not apply. While the prices have come down on the North American blu-rays, importing those is only really for the hardcore fans; casual viewers looking to catch up on the whole series will get very good value out of Sony Pictures Home Entertainment UK’s DVD sets, especially this full-length second season.