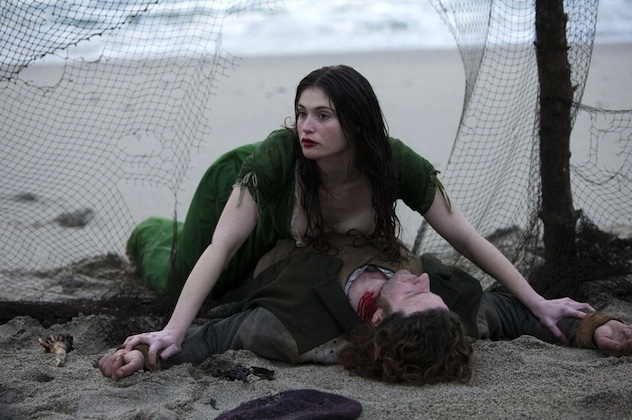 I think it was the pop beat combo The Beach Boys who in their 1969 ditty, ‘Do it Again’, regaled us with the words,

Waves of sunshine the

California girls and a

Let’s get together and

Unfortunately in the UK the reality of the seaside is somewhat different, comprising as it does multi-pierced chavs with their children’s names tattooed misspelt on their arms ( presumably to remind them what their children’s names are), dragging their offspring away from the sewage outlet spewing  effluent into the bathing area as they try to balance a polystyrene tray of chips on a plastic pint glass of warm lager – as the heavens open, deluging them in torrential rain. It’s a uniquely British vision of hell we offer the world and one that Mona Lisa‘s Neil Jordan has returned to once more. This time he’s bought vampires.

We’re introduced to Gemma Arterton, who for a 200 year old vampire/ lapdancer can writhe and wiggle with the best of them as she entertains a punter at a strip joint. Turns out she also turns tricks as a prostitute to earn cash to support her daughter, played by Saorsie Ronan.  Rather than giving head she takes head by decapitating the poor punter and has to flee the scene to the faded grandeur of what appears to be Hastings. They set up a knocking shop in a dilapidated hotel and it’s here that the story unfurls.

It’s been ten years since Jordan’s last horror film and this, arguably, is the third part of an unofficial trilogy starting with The Company of Wolves. In keeping with these there is a heavy sexual subtext to it all, a facet which Arterton’s character positively revels in. Saorsie on the other hand shys away from this, falling for a terminal leukemia victim to whom she opens her heart, revealing, via her notebook, how she came to be a vampire. ‘There comes a time in life when secrets must be told’ a voiceover says at the start of the film though presumably not if you’re Jimmy Savile.

Though adapted from a stage play by Moira Buffini,  Jordan has his own spin on vampires with both of them using their talons to draw blood from victims. Daylight clearly holds no fear for them either.  The film is visually striking as it flits back and forth in time, and there is a prevailing air of decaying grandeur with the producton designer’s vision of a seaside resort in decline especially good. Jordan’s eye for a striking image is notable, with waterfalls gushing blood, and there is even a little reference for Hammer fans as Dracula, Prince of Darkness plays in the background in one scene. There is much to be enjoyed, though plasma pleasure seekers may be left a little disappointed. Though it’s title is obscure, perhaps the film’s most bizarre element  is a thank you in the credits to Status Quo!