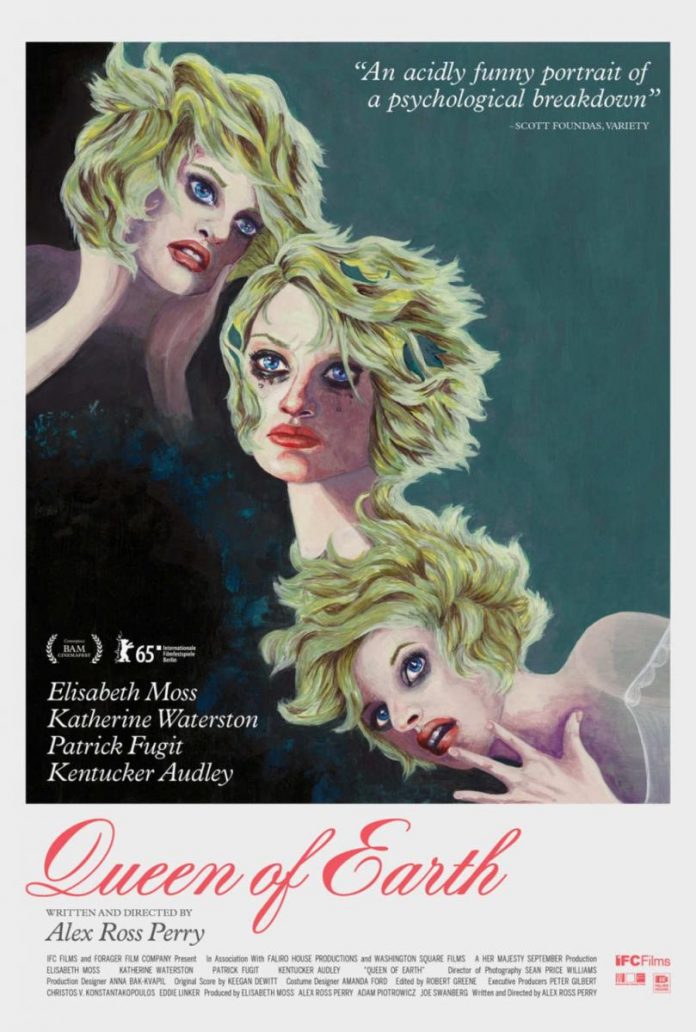 “You can get out of someone else’s psychology but you can’t get out of your own.” Virginia (Katharine Waterston) muses on relationship breakdowns with her best friend Catherine (Elisabeth Moss) at a lakeside retreat, just the two of them.

Within the last year, Catherine has lost both her father and partner, the former through an ‘accident’ borne out of depression, the latter through his infidelity. But instead of being a vacation of mutual bonding and support, the women slowly come to despise each other with quietly devastating consequences in Alex Ross Perry’s psychological chiller, indebted to Polanski.

Queen Of Earth audaciously begins with a patient close-up on Catherine’s distraught face, begging an offscreen voice as to why he cheated on her so soon after the accident. From the start, we are plunged into the psyche of an emotionally broken character, no tangible context existing outside of the frame. Once the drama moves to the countryside, the camerawork drifts unhurriedly yet is strangely unsure of itself as it records the two girls, becoming metaphysically aligned with Catherine. Or does it? They begin to needle each other, both thinking the other over-privileged, Virginia with her carefree, vagrant lifestyle, the other managing her successful father’s business: flashbacks to the outing there from the previous year show that same resentment bubbling under, albeit deflected by their respective partners. Tension mounts between the two until the arrival of Virginia’s casual boyfriend, Rich, tips uneasy company into a volatile crowd.

Perry uses close-up to almost tyrannical effect, locking the friends into mercenary separation even when they sit next to each other. Relationship disclosures are visually articulated through the reaction of the listener before moving to their confessors, a conscious denial of direct focus to elicit our empathy. The camera becomes an instrument in a battle of egotistical wills.

The frame further acts as a prison, trammelling Catherine as she agitatedly kneads her face, complaining about a skin irritation, or compartmentalising her in her room against the spacious kitchen in a cross-section of the cabin, a party guest from the night before standing by the cooker and mocking Catherine for being over-sensitive about her dad to an(other) offscreen presence. Scenes continue to become noticeably unanchored, flashback no longer signalled or internal dynamics strangely offset, leaving the viewer to wonder how much is imagined.

“I wanted to be left alone,” Catherine says, her behaviour now dangerously erratic. “No, you wanted to make a spectacle of yourself,” replies Rich. But such is the strained ambiguity of Queen Of Earth, it is unclear just who is making a parade of Catherine’s spiritual fragility. Is the film Virginia’s demonisation of her best friend or a fugue signalling  mental breakdown? Just who’s psychology can we not break out of?

Extras: Rather pointless Behind The Scenes; Commentary with Perry and Moss, the director dominating – with the exception of the opening scene, all was shot in order, including the flashback scenes, prudently adding to the sense of psychic hinterland. JK.