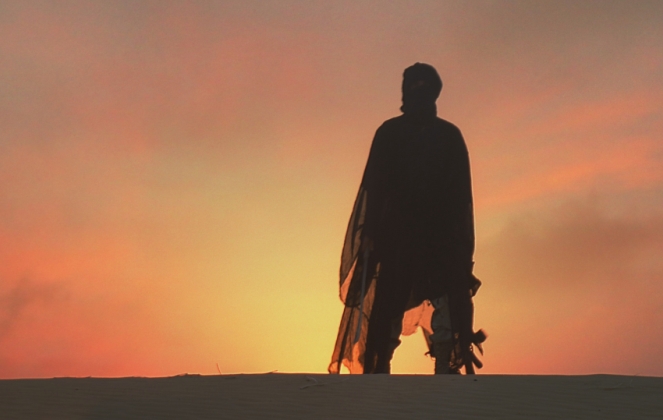 Thursday 22nd August sees the world premiere of The Dead 2: India from the Ford Brothers.  Hopes are high following their 2010 Frightfest screening of The Dead, which was a genuine surprise that year:  a Romero-style zombie flick shot on film in difficult circumstances in Burkina Faso that packed decent punches in both action-horror and character terms.  The local acting was good, with a breakout performance from Prince David Osei alongside Rob Freeman (Smallville, Shanghai Knights); the effects were solid, and the location work gave the film an authenticity it would never have had filmed somewhere in the States or Europe doubling for Central Africa.

Part of what kept the flavour of classic Romero is the script itself, a labour of love started in the eighties, and which carries the sense of the genre from that era.  It is the simple throughline of many a film be they western, war or adventure: one man survives a disastrous event and must travel from A to B while avoiding the fall-out from that event.  Prince Osei and Freeman form a classic taciturn duo as seen in many of those sorts of films; both military men, both driven by personal (as opposed to professional) motives, contrasts in character as well as visually.  Considering one is a relatively fresh to acting and the other was suffering from malaria so badly he almost died during shooting, they achieve a great deal without overacting, rapidly becoming a believable team trying to survive.

The effects are resolutely practical, limited by budget, materials and the weather locally; some prosthetics began to melt in the heat and had to be shot as quickly as possible.  Weapons are often real – some of the military in scenes are actual military personnel with their own weapons and jeeps – while a large number of the zombies and corpses on-screen are crew members.  Amputees or actors suffering from specific injuries or ailments make for scarily effective traditional zombies, with careful shooting and editing returning the shambling zombie to its rightful place in the terror hall of fame.

These facts throw up something very interesting about the film and production as a whole.  Whereas the controversy over the videogame Resident Evil 5 centred very much around the sense of a white protagonist mowing down swathes of black zombies – described in places as the perfect training video for the KKK – The Dead is a film in which the locals themselves are very much an active part of the production, in which the film would not be successful without them.  In keeping the leads racially balanced, the film instead offers, as all the best zombie films do, a reflection on a real-world situation.  The use of soldiers who should be on guard duty on the border with war-torn Sierra Leone – working as extras on the film paid better – means that the film visually echoes news footage of Sierra Leone itself.  The dead bodies and people being shot and killed provide further echoes, and in that reflection lies the thought of what is really happening out there, who are the ones firing the guns, wielding the machetes, and who are the ones dying.  In true Romero fashion it provides no answers, but it provides some food for thought and discussion after the credits.

The U.K. blu-ray from Anchor Bay is absolutely worth buying, and a great way to get in the mood for the sequel.  The transfer is suitably filmic, dealing very well with tones and light. The audio is as good as heard in the cinema.  The extras really make this, however; a deleted scene and some interviews are appreciated, but the stand-out is the commentary from the Ford Brothers themselves, a feature not even listed on the sleeve. Everything you could possibly want to know about the film can be heard here, and it is a wonder the cast and crew survived the making of the film itself.  One cannot but recognise that the hard work it took to make the film translates into a well-crafted final cut, one snatched from the jaws of heat, illness, robbery, near-starvation and single take after single take.  It certainly has far more replay value than much of what this particular subgenre has vomited up at us over the last few years.