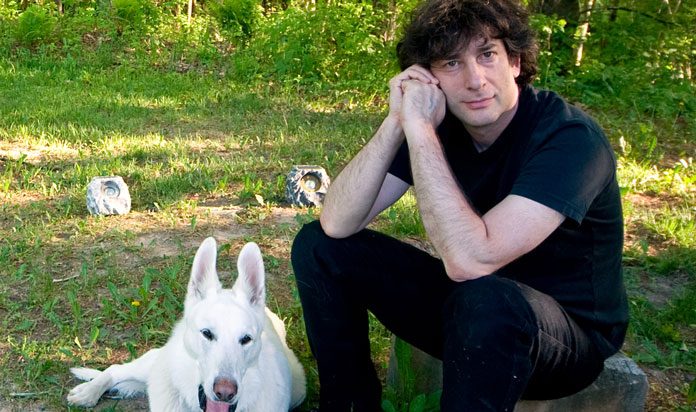 Fantasy author and literary rock star Neil Gaiman will release his latest book Norse Mythology next February. ON his blog Gaiman revealed the new cover of the book and stated that he had been writing the book since 2012. The author states that book will be a retelling of classic Norse Mythology from “the beginning of things through to Ragnarok and after.”

Gaiman’s fiction has often dealt with gods and his multi award-winning book American God’s was recently re-released with a new cover designed by Robert E. McGinnis. The awesome McGinnis is one of cinema’s greatest unknown heroes with science fiction and fantasy site TOR informing their readers that he was responsible for the iconic James Bond film posters in the 60’s and 70’s. American Gods also dealt with Nordic legends and featured the famous gods Odin and Loki. The book has been made into a television series on Starz with Deadwood actor Ian McShane playing the mysterious Mr. Wednesday. The show will air in early 2017.

Nordic mythology has always been a strong influence in fiction, yet in recent years it has seen a surge in popularity across many different platforms. One of Marvel’s most successful and beloved characters is Thor and he is the comic book version of the famous Nordic god. Thor is currently played by Chris Hemsworth in the Marvel Cinematic Universe and has featured in four films with a fifth film to be released next year.

On television Vikings created by the History Channel has proved very popular with audiences. Media new site Deadline reports that the series has been renewed for fifth season with The Tudor’s actor Jonathan Rhys Meyers joining the cast. Even chat-heavy digital gaming platforms like Gala Bingo have launched games with Nordic themes and designs, aware of the growing popularity surrounding the Scandinavian gods. Neil Gaiman’s new book will only increase interest in the genre.

Neil Gaiman is considered to be one of the greatest and most prolific fantasy writers of his time. He has written several novels, one of the most highly regarded comic series (Sandman) and the screenplay for the film Beowulf (another example of Nordic legend). In the past years he has turned away from writing about fictional horrors and has addressed the very real horrors of the Syrian war. This month the Indian Express reported how Gaiman and many other celebrities including Cate Blanchett, Stanley Tucci and Kit Harington read the poem “What They Took With Them” by Jenifer Toksvig. The poem was inspired by first hand testimonies from Syrian refugees and the items they brought with them.