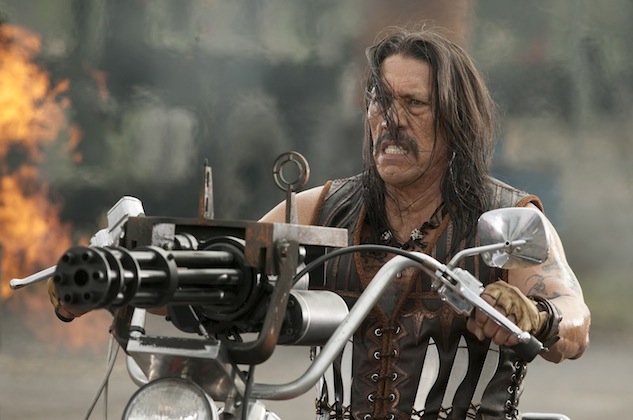 The semi clad females stare aghast at the man before them as he holds his huge chopper with both hands!  This is about as subtle as Robert Rodriguez’s new film ‘Machete Kills’ ever gets and sums up many of the scenes that Danny Trejo as the knife wielding killer shares with any of the female cast.

It all starts promisingly enough, with a faux trailer replete with jump cuts, scratched print and a woozy muffled soundtrack for what will be the intended third film in the trilogy, ‘Machete Kills in Space!’ Then we get the film’s opening scene, with the machete wielding title character hacking away at the army of villains who have double crossed him. It sets the tone for the rest of the film as stone faced Danny Trejo’s ex federal agent finds himself recruited by the President himself to go to Mexico to take down a lunatic revolutionary and a bonkers billionaire arms dealer. Carlos Estevez (a well known actor using his real name) tells Machete, ‘You know Mexico. You ARE Mexico!’.  It’s dialogue that we won’t be hearing at the National Theatre any time soon but it’s all in keeping with the film’s B movies homage.

This is a typical Robert Rodriguez movie,with the eponymous filmmaker seemingly doing everything (he directs, produces, edits, writes, composes and is Director of Photography too)  though if the credits are anything to go by it has taken 14 other listed producers to get the film to the screen. But what the makers have overlooked about the B movies they so lovingly ape is their brevity, because Machete Kills is just too long at 107minutes, and it peters out, pausing only to set up the third in the franchise.

Playing like a very bloody Bond film, even down to the hopeless henchmen who can’t shoot straight (they’re incapable of hitting a cows arse with a banjo), the movie nonetheless features some deliciously daft violent set pieces, notably those involving helicopters.  All concerned seem to have had a great time making it and this shows on screen with many star cameos relishing their opportunity to let themselves go – especially the face changing, gender swapping assassin, The Chameleon or El Camaleon. But it’s Mel Gibson who really seizes the moment. Freed from the shackles of keeping his less than PC views under wraps, he really goes to town as the arms dealer intent on destroying Earth. It’s a pity that his outbursts have kept him away from the movies as his screen presence has been much missed, and this role only serves to remind us what a great leading man the Gibster is.

Perhaps most regrettable is Rodriguez’s misogynist portrayal of the female characters. As in Sin City they seem to be either strippers, whores, or just there to dress the set in scanty outfits before being brutally slayed or suffering hideous injuries. It’s a shame, as Rodriguez is clearly adept at action films but seems to squander his talents so frequently on films that are below his abilities. With his penchant for proving that he can make profitable movies on a low budget it’s perhaps time for him to start broadening his wings a little because as well cast as Danny Trejo is in the title role he won’t be bothering the Academy Awards just yet.