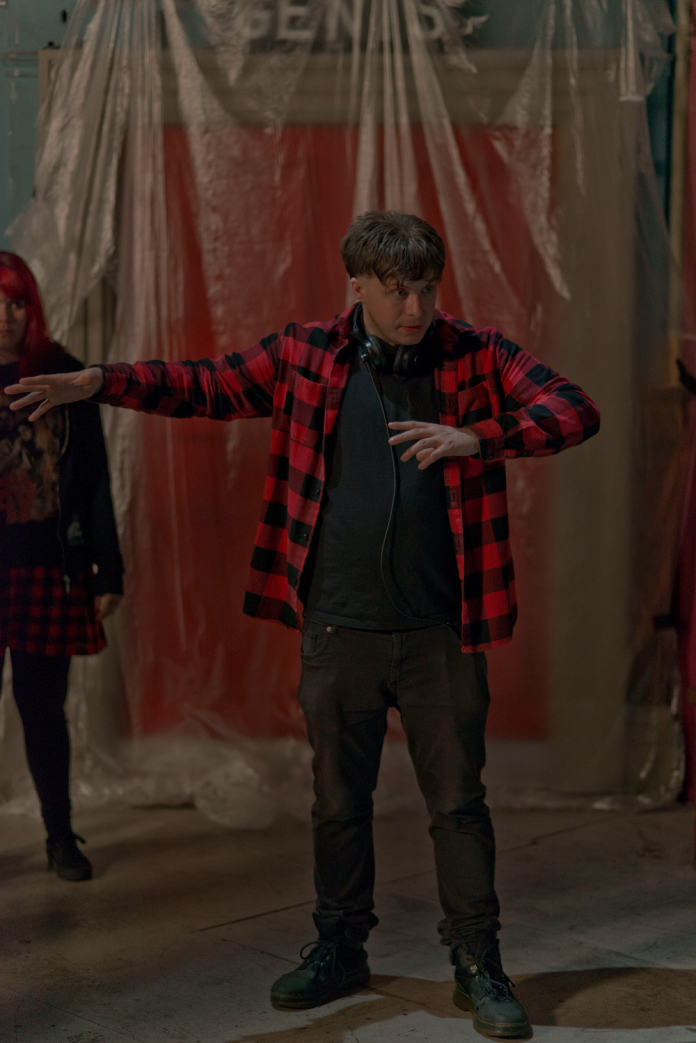 Everyone knows that FrightFest contains movies which like to push the envelope and Eating Miss Campbell from Troma does exactly that. We chatted to its director Liam Regan just before its world premiere on Discovery Screen 2 today.

DS: It’s been a while since you’ve had a movie at FrightFest, what have you been up to?

LR: Yeah, it’s been around 7 years since My Bloody Banjo screened back in 2015, and it’s been an extremely emotional rollercoaster with that movie. I made a lot of mistakes! My Bloody Banjo screened worldwide at film festivals and receiving critical acclaim, we were the micro budget horror film that could. However, that all came to a screeching halt, after I signed a really bad distribution deal. I was promised a lot and they delivered nothing, it was a huge learning curve for me, and it took a long time to get another movie off the ground. In the downtime between movies, I returned to Tromaville and worked on Lloyd Kaufman’s latest Tromatic opus #ShakespearesShitstorm (now currently playing the film festival circuit) and also, trying to work out what the next movie would be. For a long time, it was a film titled “Parents Evening” which then transformed into “Killing Miss Campbell” and then ultimately “Eating Miss Campbell”.

DS: Where did the idea for Eating Miss Campbell come from and do you have a favourite teen horror movie?

LR: I’ve always enjoyed cannibal movies, especially Parents (1989) starring Randy Quaid, and of course Cannibal Holocaust (1980) … sans turtle torture scene! All my friends were turning vegan, and I thought it would be funny to write a film about a morally conflicted, coming of age teenage cannibal who happens to be vegan. I’ve always had an internet in school massacres as a theme in movies, and how over 20 years has come and gone since Columbine, and nothing has changed in society, the theme is still topical and relevant as it was back then.
And favourite teen horror movie? Hmm, does Halloween H20 (1998) count? Hot off the heels of Scream (1996), I always found H20 to be an unsung entry in the franchise, and my personal favourite too! Cabin Fever 2: Spring Fever (2009) is possibly the most entertaining and fun Ti West movie, and I’ve always had a thing for Heathers (1989) and Tragedy Girls (2017).

DS: Did you write it with a cast in mind?

LR: Yeah, I saw Lyndsey Craine in Book of Monsters back in 2018, and the character of a vegan goth girl called Beth Conner popped into my head. And the rest of the cast came from auditions and personal choices, by the time Eating Miss Campbell had a second draft, it was already a Banjo sequel, bringing back the likes of Vito Trigo as Mr. Sawyer and Dani Thompson as Deetz from the previous movie.

DS: Laurence R. Harvey proves once more that he’s game for anything doesn’t he?

LR: Oh yeah! I discovered Laurence after I saw the trailer to The Human Centipede 2, and being a huge fan of that movie, it was a dream to cast him in my first movie (My Bloody Banjo) and have him return again as Clyde Toulon in Eating Miss Campbell. I was worried presenting his scene to him for Eating Miss Campbell, but I kept reminding myself: “This dude wrapped his penis in barbwire and jacked off with sandpaper in Human Centipede 2!”
DS: Was it a long shoot and was it all done on location?

LR: First leg of production began in January 2020 for 17 days, with the plan to return and complete the movie a month or two later, but due to the pandemic and the death of Blade Braxton who plays The Midnight Rose in the movie, we had to rewrite and push back production until Summer 2021 to wrap the movie. All of the movie was filmed in and around South Yorkshire, predominately Sheffield and Barnsley.

DS: Its very effects heavy, were they all realised on set, and which one was the hardest to get right?

LR: We had such a fantastic special effects team with Graham Taylor and Mim Williams. All prosthetic effects and head casts were created a few months prior to the first leg of production and then tested and executed whilst filming. I would say every special effect was hard to perfect, as it’s how you film around an effect that makes it.

DS: There’s a lot of brutal humour, some gags walking that thin line between taste and social commentary, do you think you’ll have issues when it plays across festivals?

LR: I would like to think that audiences understand satirical satire when they see it, be it in good or bad taste. And I’ve always felt independent film to be the punk rock of the film industry, and if you don’t feel in danger at a punk rock gig, there’s something wrong. Plus, my mentor Lloyd Kaufman is the biggest shit disturber on the planet, so years of growing up on Troma movies have certainly warped my fragile little mind.

DS: There’s a load of references to teen horror movies, are there any movies you’d have liked to have referenced but couldn’t fit in?

LR: I certainly wear my influences on my sleeve, I guess whilst the movie has meta commentary throughout, it would have been wrong to not acknowledge contemporary and niche film references, I always find the best film references are the ones that only a handful of people get.

DS: Will you be nervous when it has its world premiere at FrightFest 2022, and how would you describe it to those who know nothing of the movie?

LR: Nervous? Shit yeah! I’ve been going to FrightFest since 2010 as a solo horror fan, and then my dream to screen at FrightFest was realised in 2015, and in 2022, you could say: the prodigal son returns. I just hope people have fun with the movie and it’s a nice escape for 84 minutes, or a visual assault on the senses, I’ll take either!

DS: Troma movies are a big part of your life, what is it about them that makes you such a rabid fan?

LR: I’ve been a fan of Troma since I was 11 years old, and growing up with slapstick violent sitcoms like Bottom, really shaped by sense of humour, and Troma movies for me are like a live action cartoon with social commentary.

LR: Right now? I’m planning on what comes next. Maybe I’ll wrap up the Banjo trilogy once and for all, or maybe wait another 7 years to get a movie off the ground, I guess it all depends on what happens with Eating Miss Campbell…