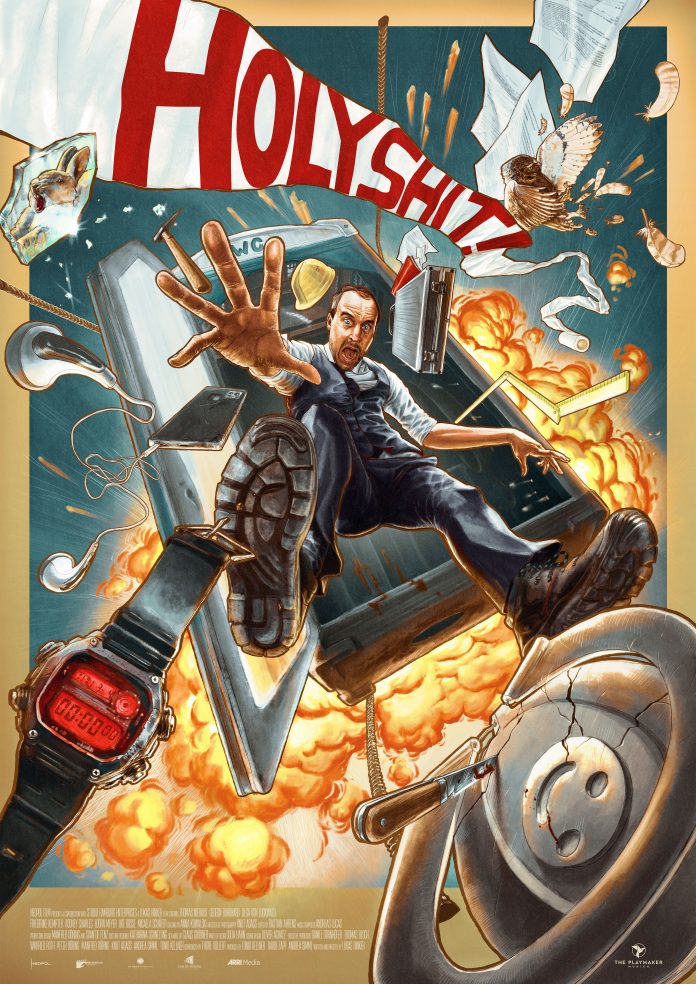 We love a crazy title here at Dark Side towers and Lukas Rinker’s Holy Shit! surely must win title of the fest for 2022. We had a quick chat with him about this hilarious thriller set almost entirely in a portable loo!

LR: I found out – while working as an intern in a small production house – this could be my thing, at the age of 20. Though I already shot some “stunning” action movies with my friends and lots of ketchup on snow when we were about 13.

DS: Where did the idea come from?

LR: The idea for Holy Shit! came from me thinking about how to break into the feature-movie-scene. How to get a movie made at all (financially) and still to have a setup that would enable me to put in all kinds of genre-pieces that I love. It seemed a good start to go for this confined-space-scenario.

DS: Was it hard to balance the humour and the deadly situation so the story remained firmly grounded?

LR: I’ve always gone for a satirical, black-humoured tone in my short films, so this came somewhat naturally, and I could write the way I always did. Of course, I didn’t know whether the material would be interesting enough, entertaining enough over the course of 90 minutes and I’m very glad it is so well received.

DS: What technical difficulties arose from shooting in such a small space?

LR: We didn’t have the funds to build different stages of the portages-loo-set so we had to cut it up, make it modular – so that we then could place the camera in all kinds of places. Also, for our wonderful actor Thomas Niehaus it was just a pain – lying down in the cold, wet, sticky plastic four weeks in a row!

DS: The effects are superb, were they all realised on set?

LR: Thank you so much! Yes. I’m a big fan of real special-effects and was relieved to be joined by a fantastic effects-crew helmed by Claus Grüßner from Shapeshifters FX, Berlin. They took the time and resources in preproduction to build arms, torsos, heads and all kinds of gory stuff. Pure joy. – In addition, Sven and Bianca from Feuerfest SFX helped us out with some juicy gunshots and explosions.

DS: How uncomfortable was it for Gedeon Burkhard who plays Horst, his character really does suffer doesn’t he?

LR: Oh, he was suffering =) in the very best way. I’m in love with his performance – he really helps elevate the movie to another level. Once I was told he would love to be involved, I was the happiest. Big fan since his “Rex”-Days. And he was a pleasure to work with. Great and iconic actor.

DS: This is your debut feature, were you nervous the first day you walked on set?

LR: Hell yeah! I was nervous every day for about 3 months of prep and shooting. I just hope nobody did notice.

DS: What lessons did you learn whilst making this movie which you’ll take with you to your next feature?

LR: The experience of having a pro-crew involved as well as superb actors was just fantastic. In hindsight it feels like I really didn’t do much while shooting. Images and performances always were way above my imagination – in the best way. I can’t thank everyone enough for pulling off this great flick and would love to go at it again with the same people.

DS: Will you be nervous when the movie plays FrightFest 2022?

LR: Absolutely. I just hope the audience enjoys themselves and are having a good time. That was always my number one goal.

DS: What’s the German film industry like at the moment?

LR: Well, it’s getting better, I think. Never would I have believed to get a genre-movie like Holy Shit! funded through official channels – but it did. And that was a very pleasant surprise. HessenFilm Funding was courageous enough to let us make a gory toilet-movie and I think they can be very happy with the reception it receives. Even though I got lucky with this one, it is very hard to get a debut-feature made – let alone a genre movie. I think a false understanding of the market and narrowed interest in globally appealing films is part of the problem.

DS: For those of us new to German cinema, whose work would you advise us to view?

LR: There is a slew of talented filmmakers in Germany. On the genre-spectrum I can absolutely recommend films like “The Samurai” (Till Kleinert), “Luz” (Singer) or “The Bunker” (Chrissos) for example. If someone is really interested to dive deeper. Contact me for more insight.

LR: First – I’m trying to stay realistic. It wasn’t easy to get this one off the ground and we’ll have to wait and see how it does. But should I ever be allowed to go at it again – which I would love to do for the rest of my days – then – one day – I want to do “Laserpope”. Part Pope, part machine – this guy is Robocop (best film of all time) meets religion, with lasers. And I already did a fake-trailer for the project. Find it on YouTube. Until then, I’ll be working on the sequel to Holy Shit! – The same shit happens to the same guy – again!