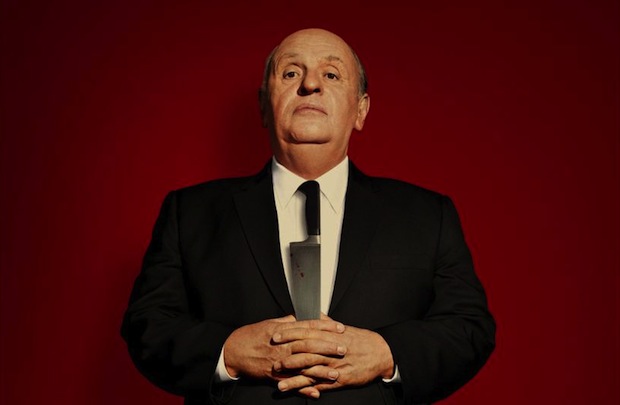 He’s been dead for over 30 years, yet Alfred Hitchcock still remains the most instantly recognisable film director, so it’s a wonder there hasn’t been a bio-pic about him before this one. The script was once on Hollywood’s list of great unmade features but finally it’s been filmed with Anthony Hopkins as the food-fond director. Based on Stephen Rebello’s ‘Alfred Hitchcock and the making of Psycho’ we see him battle with the studio and the censors to get ‘Psycho’ made while struggling with the belief that his wife Alma was having an affair with a writer.

For Hitchcock, Psycho was a game changer – different from anything he’d done before. Paramount bigwigs were so appalled at the subject matter they refused to stump up the money leaving the director to bet the house on it. Literally. If it had failed he’d have lost everything including his home and his reputation. His desire to challenge his own skills are balanced with his dark humour, best seen early on as he revels in disgusting  the society wives he invited to his house only to show them photos of Ed Gein’s murders.

‘Making of’ productions are always of interest to fans but the film doesn’t satisfy enough and neither does it fully succeed in analysing Hitch’s dark side, preferring to be something of a comedy drama, albeit with some knowing lines hinting at his obsession with ice cool blondes and sex, though thankfully it’s not as tawdry as BBC’s recent, The Girl.

It begins quirkily with Hitch addressing us directly, much like he did in his TV series, but this is quickly forgotten as the melodrama unfolds, with him believing that Alma is having an affair with another writer at a beach house whilst he directs back at the studio. Although the film does offer up interesting snippets (the reason for his disdain for Vera Miles for example) the film really concerns itself with just how vital and underappreciated Alma felt, having to endure his well documented obsession with his leading ladies. Little is really known about his wife, there is no footage of her, but Helen Mirren is excellent with her barbed quips whilst still clearly devoted to him and indeed he is to her.  Arguably without her incisive script notes and command of editing it’s debatable whether Psycho would have gone on to such success after the studio executives first watch it disapprovingly.

The film is very funny in places but it never gets beneath Hitch’s skin and is not helped by imaginary conversations he has with ‘Wisconsin Ghoul’ Ed Gein, which seem out of kilter with the rest of the film.

Hopkins is good value as the portly director even though obviously submerged under layers of latex. While the resemblance is thin, his mannerisms, delivery and charm are spot on.  The supporting cast too are all uniformly good, though underused.

The film makers have said that,  ‘we have a thing about not wanting to make movies about making movies because it’s just too ‘inside baseball’  ( whatever that means!) and it’s a shame because the book is a great read and the behind the scenes story of how ‘Psycho’  got made is, like many classic movies, compelling, but this focuses on Hitch in love and the film tries to have a foot in both camps.

Read about Hitchcock’s Making of The Birds in this months DARK SIDE DIGITAL .