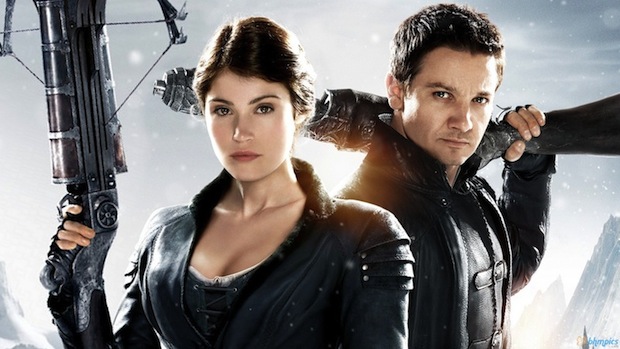 It’s not often that a comedian known for his idiotic characters and broad comedies turns his hand to updating fairy tales with some pretty gruesome moments but that’s exactly what Will Ferrell has done here, albeit withthe expected irreverent touch. It won’t harm box office having Gemma Arterton in 3D either. Here she plays a grown up Gretel to Jeremy Renner’s somewhat lacklustre Hansel, having despatched the witch in the dental house of horror, burning her alive in an oven when they were children. Now as bounty hunters they take on a case where children are being kidnapped by a coven of hideous hags and in the process discover the truth about why their father abandoned them in the forest when they were young.

The director Tommy Wirkola directed Dead Snow previously and he continues to revel in the bloodletting with characters despatched in spectacular style as heads get blown off with shotguns or obliterated by other equally unsavoury methods – none more so than a scene with a lumbering troll. The film much like 2004’s Van Helsing, also features an impressive array of olde worlde weaponry but with a contemporary twist. Despite being CGI, the effects are good and there are some impressive practical ones too, notably the troll. With two ex Bond girls proving there is life beyond that franchise, Arterton as a kick ass heroine commands the film but unfortunately is not matched by Famke Janssen’s villainous witch who spends most the film made up to look like the unintentionally amusing lead squawker of shock rockers Cradle of Filth.

This is a rattling good 90 minutes of action sequences which don’t always hide the thinnest of storylines but the action is effectively handled and it captures the macabre undertones of Grimm’s fairytales to, at times, graphic effect. This is clearly intended as the start of yet another franchise but with several action films released soon it’ll have tough competiton.