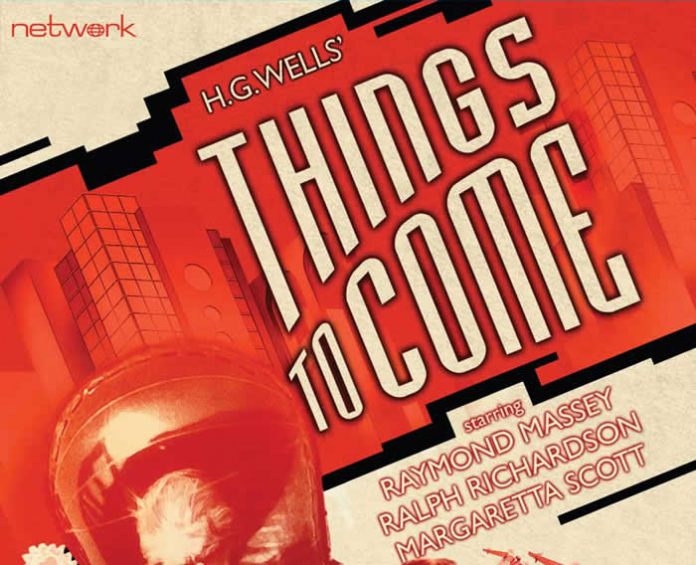 I’ve finally just about finished up on our special Hammer issue and boy is it looking great. Rick Melton’s Dracula cover is just sublime. Only the review section to do now and I’ve just sharpened my critical faculties on Blu-rays of two H.G. Wells stories: The Island of Lost Souls and Things To Come. The former is the 1932 version of Island of Dr. Moreau, with Charles Laughton camping it up in a white suit and cracking his whip over the ‘revolting’ natives like a pudgy Indiana Jones. It’s a mystery to me how Charlie’s marriage to The Bride of Frankenstein’s Elsa Lanchester lasted for 33 years when he was so obviously gay. According to Elsa theirs was a very unconventional union: “We both needed other company,” she said. “I met his young men, and I had a young man around and Charles didn’t even argue.” Very civilised.

Lost Souls was considered pretty heavy stuff in its day and it was even banned in England, but now Eureka have released the uncut version with a PG certificate, so how times have changed.

Things To Come has also been given a spectacular restoration, this time by Network, and it was great to renew my acquaintance with this 1936 sci-fi classic. Wells hated Lost Souls but loved Things To Come, which he saw as an antidote to Fritz Lang’s Metropolis. He didn’t like Lang’s film at all. There’s a lot that’s impressive about Things To Come but it’s no Metropolis, and I do find it a bit ‘preachy’ for my liking in places. Having said that, it remains an astonishing technical achievement for its time.

Now while we are on the subject of H.G. Wells I don’t know whether I have mentioned this in the past but I am actually related to the old boy on my mum’s side of the family. I believe he was a cousin of a great, great aunt or something equally obscure. Anyway, when my dear old Aunt Lily died and left my mum her bungalow on the Isle of Wight, my mum phoned me up one day and said she had found some paintings in the attic that had been done by Charlie Wells.

“Sounds interesting,” I said. “What did Charlie do for a living?”

Well of course Lindy and I both started having visions of overnight riches when these went under the hammer at Sothebys, so we thanked mum for her generosity and made plans to travel to the Island to pick them up.

Fast forward a week or so and there we were, anxiously waiting to view these masterpieces. My mother then produces a trio of paintings… done by numbers! Remember the old paint-by-numbers sets? If you do you’re too old to be using this Internet thing.

“But I thought you said Charlie Wells was a painter?” I asked.

True story. I still reckon it was just all a ploy to get us down on the Island for a visit.

Still, I love my mum a great deal, almost as much as Norman Bates did, and it was she who began my interest in all things horror and fantasy by taking me to see The Time Machine at the age of 12 – another H.G. Wells masterpiece. I must have seen it a dozen times since and it never loses its appeal for me. Rod Taylor at his peak can never be beat (check out Dark of The Sun on DVD if you want further proof). I still can’t quite work out why the Guy Pearce remake was such a disappointment – though I love Klaus Badelt’s music for that one.

I’ve mentioned before how much of a fan I am of Edgar Wallace, and I’ve just finished reading all of his Four Just Men novels. These were made into a TV series in the 50s starring Jack Hawkins and Richard Conte and Network recently released them as a box set. The shows are a bit dated but fun to watch. However, they didn’t retain the spirit of the Wallace books, where the Four Just Men dole out justice in the most brutal fashion, killing criminals in cold blood. I’m much more looking forward to Network’s July release of all the old Edgar Wallace Mysteries shot at Merton Park in the 60s.

These were shown a lot on telly during the late 60s but they were actually made as snappy second features for the bottom half of cinema double bills. The first two volumes star the likes of Bernard Lee, Harry H, Corbett, Hazel Court, Paul Eddington and Conrad Phillips and will be available as 3-disc sets on 30 July 2012, priced at £29.99 each.

Unseen for decades these have been freshly transferred from the original film elements specifically for this release, and all 47 films will be released over seven volumes.

Volume 1 has 8 episodes complete and uncut, including Urge To Kill, a non-Wallace story that was included in syndication packages as an Edgar Wallace Mystery, plus October Moth, one of seven thrillers made by Independent Artists Ltd during the same period as the Merton Park films – two of which were from Wallace stories. The other films in the set are: The Fourth Square, The Clue of the New Pin (a great locked door mystery), The Man Who Was Nobody, Partners In Crime, Marriage of Convenience and The Clue of the Twisted Candle.

Volume 2 has another 8 episodes including The White Trap, another Independent Artists thriller. We also get The Man At The Carlton Tower, The Clue of the Silver Key, Attempt To Kill, Man detained, Never Back Losers, The Sinister Man and Backfire.

Though they were made in the 60s all of the films have a distinctive 50s feel about them, and if you’re as much of a Londonophile as yours truly you’re going to love the nostalgic locations, mainly around Wimbledon (Merton Park studios was just a small house really, so location work nearby was essential). One thing concerns me about Volume 1 is that it’s missing The Malpas Mystery, one of the best first season shows. How come? I’ll be reviewing the movies separately once I get my sticky hands on some preview discs, and I can’t wait!

Proof positive that I’m turning into an old fogey is my newly discovered love for old Dad’s Army episodes. My late father used to love watching this when it was first broadcast but I was not a fan. However, my girls bought me the box set for Christmas and I’ve been working my way through them in order. The humour is very gentle and there’s quite a bit of slapstick. One of my favourite episodes is a formerly ‘lost’ one where James Beck and John Laurie dress up as a pantomime cow to camouflage themselves among a real herd of cattle. The panicked reaction of the real cows as they attempt to join them is priceless. They really don’t make shows like this any more, which is a pity.

If you love The Dark Side then you also undoubtedly love our resident artist, who was one of the first astronauts to orbit the rings of Saturn but returned to become The Incredible Melton Man. Yes, Rick has now become a household name in his own household and he is to release a coffee table book called Stunningly Savage: The Art of Rick Melton. Yours truly has been bludgeoned into doing an intro to this ‘book of blood and sluts’ so if you want an excuse not to buy it, there you go.

Finally, a heads-up to the many VIPCO fans out there. I’m off to record my contribution to a great new documentary on Mike Lee’s legendary ‘Video Nasty’ specialists next week and I’ll bring you more details next time we meet. It’s my daughter Jade’s birthday today and we’re off to TGI Fridays for a cholesterol overload. As they say in that revered establishment for the upper classes, have a nice day.