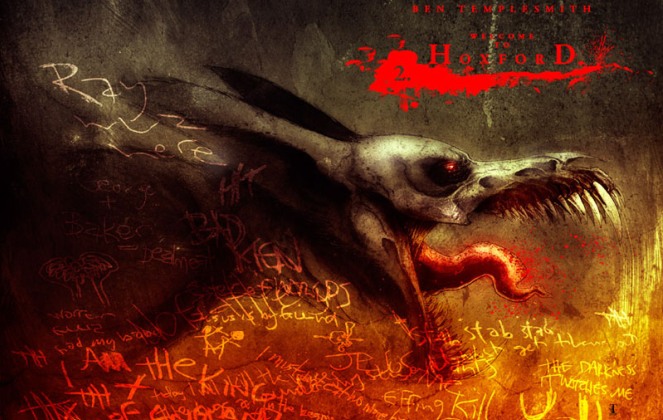 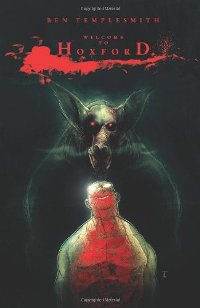 Title:  Welcome To Hoxford (2008)
Writer/Artist:  Ben Templesmith
Publisher:  IDW Publishing
Buy here:   Amazon UK
Official Synopsis:
Acclaimed writer/artist Ben Templesmith (Wormwood: Gentleman Corpse) creates his newest horrific comic book right here! In the debut issue of Welcome to Hoxford, Raymond Delgado isn’t welcome at all. Rather, he’s the newest inmate at the Hoxford Correctional Facility and Mental Institution. He has no hope of release, parole, rehabilitation, or decent conversation. On a good day, he’ll tell you he’s Zeus and only bite your arm off. Literally. On a bad day, you won’t have time to scream to the prison guard for help. But Dr Jessica Ainley, his doctor for five years wants to help Ray and can’t understand why the newly privatized, corporately run prison, won’t give her access to her patients. And why are people always transferred into Hoxford, but no records show anyone ever transferring back out…?

Review:
Award-winning Australian artist/writer Ben Templesmith will be best known to Dark Side readers as one half of the creative team behind the excellent and bloody vampire comic 30 Days of Night, which was made into an excellent and bloody vampire film film by Brit director David Slade, starring Josh Hartnett and Melissa George. He has been involved with further comics entries in that franchise, worked with acclaimed writers such as Warren Ellis and Matt Fraction, and illustrated RPG books including the 2003 issue of the D&D classic sourcebook Fiend Folio.  The man knows monsters, the man knows darkness and despair; in short, he’s a Dark Side kind of fella.

Welcome To Hoxford is a four-issue mini-series that creatively is pretty much all his.  The brisk, bloody narrative follows disturbed psychopathic former soldier Ray Delgado, abused from childhood, now sitting out a “throwaway the key” length prison sentence for dropping bodies long after he was legally sanctioned to. Continuing to do so in prison, he finds himself on a bus with other similarly sick criminals being transported to a privatised facility run by a Russian company picking up the work from Uncle Sam.  Meanwhile his former shrink Julia is trying to gain entry to said prison to see inmates who were her former patients, trying to overcome the stonewalling warden.  When the bus arrives, she gets her chance to get inside; unfortunately, this is the worst possible time for all of them to be entering Hoxford….

It’s a tightly-focused set-up that gets to the gore quickly enough, and the supernatural a bit slower. Templesmith writes in contrast to how he draws; where as his ink and colour splash all over the page, breaking panels, washing impressionistically over pages, the use of words and the plotting is pulp-perfect, lean and mean, saying only what is needed to provide the thinking behind the characters, a few good cynical horror-movie laughs, and keep the whole story moving to the inevitable showdown between psycho and supernatural killers.  It superficially resembles 30 Days with a core contained location, a plucky female side-by-side with an alpha male lead, and a classic supernatural creature in the villain role. In contrast, however, the sympathetic human protagonists of the Alaskan town are here replaced by the most sordid and despicable of criminals, the lawman lead by a deranged psychokiller with delusions of godhood, and the plucky ex-cop by a shrieking shrink who suddenly becomes quite the gun-fu artist once she has a weapon in her hands.  It’s the same, but different; ideal for fans of his earlier franchise, but very much his own work.

It’s a rollicking good read for action/horror fans, and the trade paperback can be picked up easily enough.  Hollywood optioned it in 2009 for a film, which is no surprise; the pitch is as simple as 30 Days of Night with werewolves in a prison.  However, in the years since, French director Julien Mokrani has made a self-described 20-minute “fanfilm” of the series, but it’s a fan film the way pro-am sports players are supposedly amateurs; this is a professionally cast and made short, and is well worth checking out at its website here. 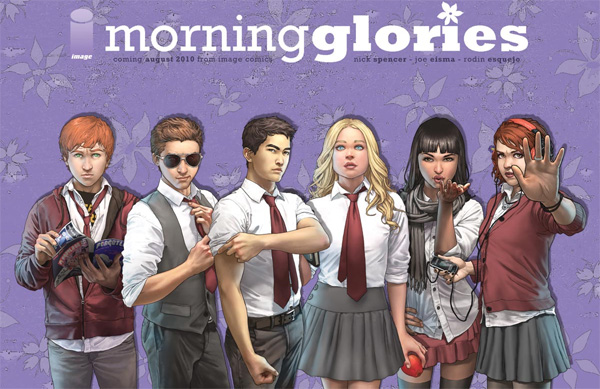 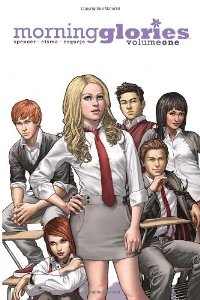 Title:  Morning Glories Vol.1 (2011)
Writer:  Nick Spencer
Artists:  Joe Eisma (interiors), Rodin Esquejo (covers)
Publisher:  Image Comics
Buy here:   Amazon UK
Official Synopsis:
Morning Glory Academy is one of the most prestigious prep schools in the country… but something sinister and deadly lurks behind its walls. When six gifted, but troubled, students arrive, they find themselves trapped and fighting for their lives as the secrets of the academy reveal themselves! Collects Morning Glories #1-6.

Review:
Image has long since evolved from its early days of knock-off superheroics and overdrawn art to a true independent publishing a wide range of interesting stories.  Ongoing horror series Morning Glories is arguably the best CW horror show never made (yet!), a tale of beautiful teenagers at a prestigious prep academy that is home to sinister occult goings-on, as well as keeping torture and murder on the discipline ladder as routine.  It’s a little like Harry Potter if Slytherin ran Hogwarts, but there are shades of everything from Whedonverse favourites Buffy, Angel and Cabin in the Woods to Marvel’s Runaways and even TV shows like Lost.  (There is even a hint or two of John Hughes’ way with teenage characters in the six distinct personality types of the leads.)

However the series from the get-go takes clichés and paints them fresh, helped by Eisma’s vivid art that characterises everyone individually with ease yet with fewer lines than your average artist might think was necessary.  Blood spatters the panel frames from early on, right up to and including yer horror movie classic by which all effects work shall be judged: the exploding head.  Weird science is thrown in, and possibly time-shifts as well; the six issues rocket past barely pausing for breath, but the ideas flow steadily through the story keeping the interest level high and compensating for the occasionally annoying characters.  To be fair to them they are at least entertaining, and the twist on the final page suggests there will be much more of interest happening with them come volume two.

Well-written, well-drawn/coloured/lettered and perfectly pitched on an issue-by-issue basis, this first collection keeps the pages turning and makes you want to pick up Vol.2 immediately on finishing.  You can’t ask more of a good modern comic book series, and it has rightfully gone on to become one of Image’s biggest hits.  This is one for the long haul – the writer has it planned out to about 100 issues, and they’re up to 40 already.