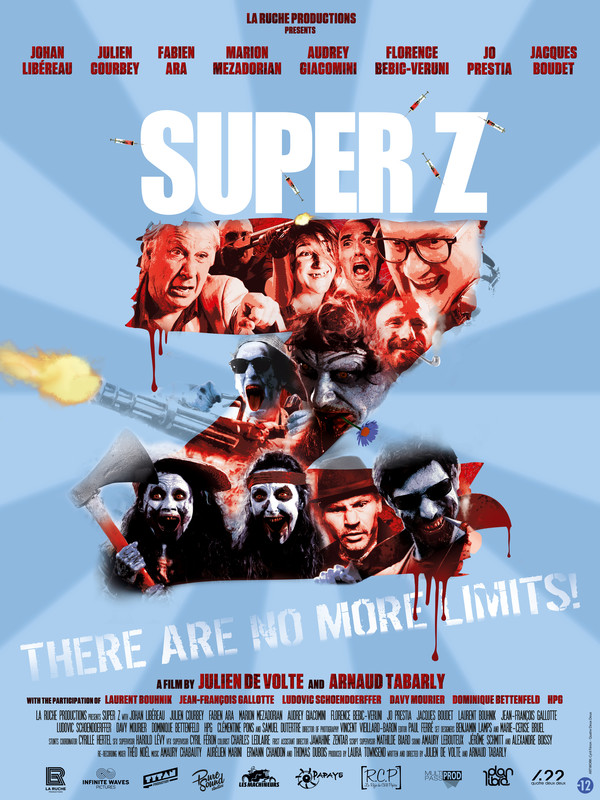 Splatter movies can go either way super serious, or super silly and Super Z is the latter. It’s a wild, gory, blood drenched ride into the mind of director Arnaud Tabarly so we had a quick chat with him about this zombie gut-fest.

DS: Where did the idea for Super Z come from and are you a big fan of zombie movies?

AT: So, yes I’m rather a big fan, although I didn’t see everything that exists in the genre. The original idea was born on our first short film with Julien de Volte: “The Foodies”. We wanted to make ghouls living in the forest that set humans’ traps, for those who got lost in the woods. They fed with human flesh while cooking them. But very quickly the idea of «thinking zombie» took over, especially by remembering the first zombie talking “Bub” in “The Day Of The Dead” of George A. Romero. Then, the film “Death Becomes Her” by Robert Zemeckis was the first reference for the first exchanges between them, but very quickly their personalities get the upper hand. (Laughs)

DS: You co-directed and co-wrote the movie with Julien de Volte, what was your process? Did you write/direct separate scenes etc?

AT: It was a mix of several methods, sometimes we wrote on our own, sometimes together and we were collecting all the ideas we liked. It was very stimulating because we were given ourselves almost no limits except for the fact we had a small budget. As a break, we sometimes watched films that could inspire us.

DS: What did the cast think when they first read the script?

AT: The reactions were quite different, but quickly the concept of family appealed to the actors who perform the zombies. However, a part of the casting was already in the short film “The Foodies”, so they knew what to expect and that they’ll still eat cooked humans. (laughs)

DS: The film goes to some extremes; did you hold back on anything at all?

AT: Full of things (laughs), there was an ambition at first to divert the image of French actors and it would have been really surprising. The characters of Georgette and Marceline were also more consistent and Yvon for example had to become the first vegetarian zombie. He also had a lot of pretty crazy scenes that intervened directly in the village. In short, due to the lack of money, we had to back off on a lot of things. But you never know, many of these elements could be suddenly in a sequel.

DS: The effects are superb, were all of them completed on set?

AT: Thank you, but no, not at all! (Laughter) we had a lot of difficulties on the set, especially on the make-up of monsters, which was very limited and that required continuous retouching. Therefore, we had to use a lot of digital effects and we had the chance to meet Cyril Féron, who did an incredible job on digital special effects, which were a great number.

DS: Do you have a favourite scene?

AT: I will have a hard time choosing one. I love when Gertre is crying. Seeing a sad zombie is something quite new.

AT: Of course!! And the script is almost ready, it must be said that the end of the film suggests something much bigger. And I’ll tell you something: you’re not ready! (laughs)

DS: It’s a wild ride that’s best viewed in a cinema with a large audience, will you be nervous when the movie has its European premiere at FrightFest 2022?

AT: Oh yes, the film is necessarily a little bit different from a classic zombie movie. You never know how the audience will react.

DS: What is the French film industry like at the moment and is there a big horror scene?

AT: That’s an exciting question, actually not really. There was indeed this year “Final Cut” by Michel Hazanavicius that remains an interesting remake, that said, I didn’t see it yet. Otherwise there has been “Titane” by Julia Ducournau, which was released last year, a Franco-Belgian production. This kind of film is very rare in France, because these films have usually no help and it is quite exceptional, one every two or three years comes out. It’s very little and it’s a shame because there are a lot of incredible films over the last 40 years and they’re often quite unknown because they’re poorly supported and have no real communication budget.

AT: I am currently working on two quite different projects that focus more on fantasy and science fiction, but a part of horror is still there: a science fiction thriller about hacking and a fantasy film about alchemy.