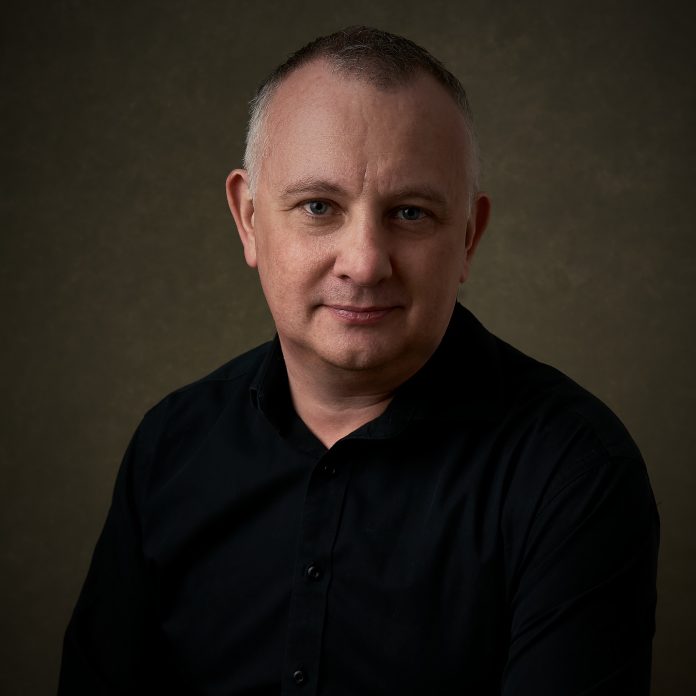 Psychological horror is always a tough genre to get correct, but Steve Johnson has delivered and excellent movie, Stalker. We had quick chat with him about this nerve-shredder of a movie.

SJ: I wish I could say that I grew up with super 8 cameras like so many other directors but no. It wasn’t until I went to America as an Exchange Student when I was 16 years old, and I visited a TV News Station that I knew I wanted to do something in the film industry.  When I came home, I enrolled in a BTEC In Audio / Visual production in Liverpool. From there, things moved slowly. I never went to Film School as they weren’t as prevalent in the early 90’s as they are now. And of course, it was VHS and Film that they shot on which made the courses more expensive. Life moved on and it wasn’t until 2012 that I got my first digital camera and started making films.

DS: How did you become involved with Stalker?

SJ: It was during the first Covid lockdown (July 2020) and out of the blue, I got an email from Stuart (Brennan) saying that he was interested in working with me because he had seen my previous feature film, ‘Convergence’ and he had found a script that could be fun to do together. It would be two actors, a minimal crew and one location which was really interesting to me. He introduced me to Chris (Watt), the screenwriter and together we hashed out a second draft which took a good few month. In December 2020, Chris worked on a third draft and it’s that version that we took forward into production.

DS: Was it a hard movie to cast as it relies on actors to play very defined characters?

SJ: The role of Daniel was easy to cast as that was always going to be Stuart as he’s the producer as well as BAFTA winning actor. That was always the intent, and the role of Daniel was unlike any other role I think Stuart has done. So really, we were looking for a strong female lead that could play opposite Stuart. Since it was going to be just these two characters stuck in a single location with nowhere else to go, it had to be someone who could equally challenge Stuart. It was actually my wife who suggested Sophie (Skelton) as she’d been watching ‘Outlander’ and commented that she was everything that we had been talking about for the character of Rose. From that point on, Stuart reached out to Sophie’s agent, and I’m really pleased that she agreed to do the role.

DS: How much rehearsal time did the leads Sophie Skelton and Stuart Brennan have, as their performances are superb?

SJ: Not as much as you would think. We only had 12 days to shoot the film and within that we had to average 9-11 pages of dialogue per day. That’s a lot of dialogue! We all arrived 2 days before and the three of us had a few conversations about characters, motivations, all that stuff and then we laid out a plan of attack. Luckily, we agreed that we would film in sequential order which made things a lot easier. Both Sophie and Stuart would know what their characters where thinking at each point of the film, because they knew what they had done the previous day, where the tension was at, and where they needed to get to for that day. So, each morning, Sophie and Stuart would be up at least 2 hours earlier than anyone else and go through their lines for the day, bouncing ideas off one another. When they came to set, they would be like “we tried this and it felt more natural” or “its makes sense to say this here.”, which made the process extremely creative and collaborative. So, I’m really pleased that you thought their performances were superb!

DS: What difficulties arose whilst shooting in such a confined space?

SJ: It’s actually great to hear you ask that because we had more space than you think because we designed the elevator to have removable walls and ceilings. That was something we talked about very early on in pre-production. I knew I wanted certain shots and to get them would mean that we would have to remove a wall or two. So, the production design team did a fantastic job making sure that we could remove a wall as quickly as possible to meet the day.  Also, we had to show the elevator moving, so we purposely designed the elevator to meet the requirements for Simon (Stollard) our Director of Photography and Federico (Belloli) our Gaffer, making sure that we could get the lights they needed in there too. I think the biggest difficulty was the fact that we were in the same location for 11 out of the 12 days. That’s a difficult thing to do, especially in a 6’ x 8’ room!

DS: What was the atmosphere like onset as it’s a pretty intense movie?

SJ: When you have films like this which are very intense, there is actually more laughter than you think. The intensity is all when the camera rolls. Between takes, the actors would be running lines off set, and the crew would be laughing whilst setting up for the next shot. You’ve got to instil that from day one. It also helped that because of Covid, we were all staying in the same hotel in our production bubble. Which meant that we all ate lunch and dinner together. In the evenings there was a games room where I know a lot of the crew hung out. It was like a decompression. It also helped that we were filming over Halloween and Guy Fawkes night. On Halloween, the hotel owners’ children went trick or treating around the crew’s rooms and for Guy Fawkes night, our Executive Producer Gareth (Wiley) put on a brilliant firework display.

DS: It has a feeling of The Twilight Zone and Tales of the Unexpected, would you agree?

SJ: It’s funny listening to peoples view on the film. I think Chris (Watt) and I talked about what his influences were when he wrote the script and I do remember we talked a little about ‘Tales of the Unexpected’ as that’s something we both experienced when we were growing up. They were self-containing stories and I guess ours is literally self-contained. I think we also talked on the tension elements from films like ‘Gone Girl’ and ‘Panic Room’.  But it’s really interesting to hear people’s take on the film.

DS: Will you be nervous when it has its world premiere at FrightFest 2022?

SJ: I think everyone gets nervous when their film is shown in front of an audience for the first time, and you always hope that people enjoy the film. I love the fact that we are playing at FrightFest 2022 and I hope the audience likes what we have done. #coldsweat!

DS: You’re a multi-talented creative, do you have a favourite role?

SJ: Thank you. I’d like to think I’ve tried my hand at various roles, and I enjoy them all immensely, but directing is what I feel I enjoy the most. Doing the other roles that I’ve done have been extremely helpful because they have helped me make informed decisions and have meaningful discussions with my heads of departments.

SJ: I have a few projects that I am developing both as a writer/director and just as a director. The key to getting those projects off the ground is funding, so that’s what I am actively looking into, as well as looking for representation.