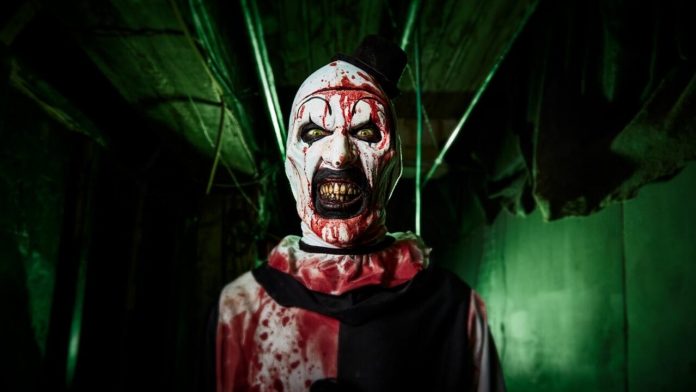 Somehow day 5 of FrightFest arrived suddenly and out of nowhere but the event did end with a bang, well, with a movie which had the audience right on the edge of their seats, literally.

The day started with the UK premiere of Piggy, the debut movie from Carlota Pereda. It focuses on a plus-size girl who constantly suffers at the bile spewed from uncaring people in her village. That is until a stranger arrives and her tormentors start to disappear. Moving from a tale of verbal and physical abuse into full grindhouse, Piggy which relies on colour tones and heat to drive home specific messages, gets a little lost amongst the violence but is a film which has something different to say about people’s perceptions of others.

The world premiere of Damien Leone’s Terrifier 2 was next and running at 140 minutes (yes, a 140-minute-long slasher!) was one of the movies we needed to be braced for as the first instalment was a no holds barred excursion into a gore-drenched nightmare. Part 2 ramps up the violence and gore whilst removing some of the humour of the first. Art the clown has returned to Miles County and focuses on Sienna, her brother and the rest of her family and friends. And that’s basically it apart from one of the most surreal post credit scenes I’ve seen in a slasher. The movie is overlong but the gore fans at FrightFest loved it and had the cinema buzzing afterwards.

A rather more subdued and serious movie followed, Ben Parker’ Burial. Set during the final days of World War II we follow a band of Russian soldiers lead by the ballsy Brana Vasilyeva who have been tasked with trafficking the discovered remains of Adolf Hitler back to Stalin. Along the way they battle German ‘Wehrwolf’ partisans but befriend Polish rebels. With an intriguing plot and a fab cast which includes Harriet Walter, Tom Felton, and Charlotte Vega, Burial was a tense and violent take on a well-known conspiracy theory.

Next was a movie that had the audience wondering about and which is destined to become the under-the-radar horror movie of the year, Barbarian. A woman books a rental home but discovers its double booked with a strange man is already there. She decides to spend the evening but discovers there’s a lot more to fear than just an unexpected house guest. Twisty, twisted and thrilling, this is the sort of movie which benefits from going into it blind as it delivers some rather smart shocks with a strong cast made up from Georgina Campbell, Bill Skarsgård, Justin Long, and Kurt Braunohler.

FrightFest 2022 ended on a high note, literally with the vertigo inducing thriller, Fall. In an effort to help Becky heal from her past trauma, best friend Hunter suggests an exhilarating climb to the top of a remote, abandoned 2000-feet high radio tower where they will scatter her husband’s ashes. But when sections of the mast’s rickety ladder break off, the girls are stranded at the top in a pulse-pounding, vertigo-inducing fight for survival. By watching this on the huge Super Screen, Fall was an amazing ride of a movie which grabbed you by the neck and left you dangling throughout. Director Scott Mann knows how to leave the audience hanging and had most of us curled up into little balls not daring to look. A superb experience.