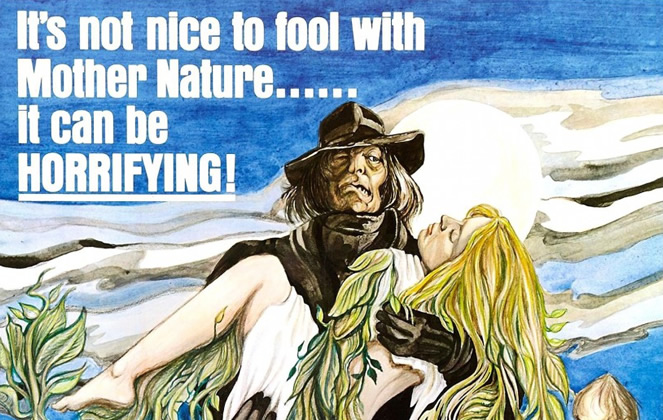 The Mutations was the result of a collaboration between two American writers – Santos Alcocer (writing under the pseudonym ‘Edward Mann’) and Robert D. Weinbach. The two had begun their horror film partnership in 1968, with the Mexican quickie Cauldron of Blood – one of the very last films in which Boris Karloff appeared before his death. Alcocer had written and directed the film, while Weinbach had produced it. Flushed with their success, they mixed together a heady cinematic brew of scenes and ideas primarily from Tod Browning’s disturbing masterpiece Freaks. Their story treatment was sold to Columbia in the early seventies, and it was decided to film the story in England, to keep costs down. 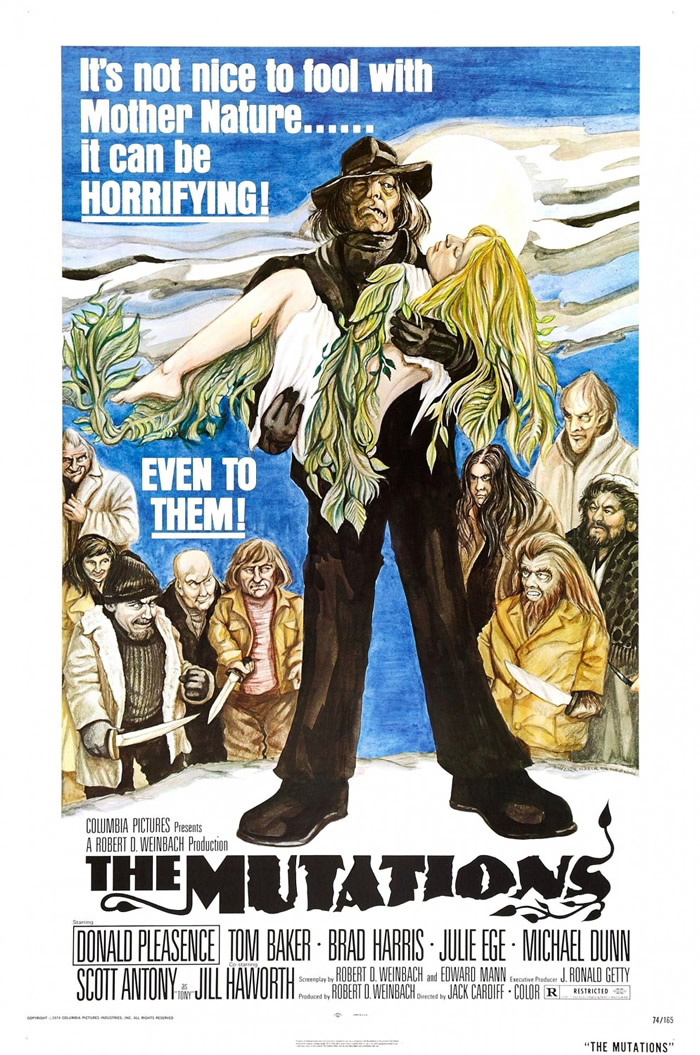 The rather evocative poster

In a surprising move, indicative of Columbia’s emphasis on the prospect of the film as trash masquerading as something more important, acclaimed cinematographer Jack Cardiff was enlisted to direct the film. Born in Yarmouth on the 18th of September 1914, Cardiff entered the industry as a runner in the the early thirties. His debut as a cinematographer was The Last Days of Pompeii, but his work ultimately went uncredited. Over the next 35 years, he acted as cinematographer on such distinguished productions as Caesar & Cleopatra, Black Narcissus and The African Queen, before winning wide critical praise for his directorial job on the French Marrianne Faithful movie Girl on a Motorcycle in 1968.

The cast was assembled throughout the Autumn of 1972, with a November starts date pencilled in. Donald Pleasence headed the bill as Dr. Nolte, the unscrupulous geneticist stocking a freak show with his mistakes. After his success as Rasputin in Nicholas & Alexandera, Tom Baker warranted second billing, a full two years before his stint as the longest-running of television’s Dr. Whos. Square-jawed beefcake Brad Harris – a mainstay of dire underbudgeted continental films in the sixties was cast not for his dubious talents, but because he invested in the project, ultimately warranting Associate Producer billing. By far the most attractive member of the cast was Norweigan bombshell Julie Ege, who had proved time and again that she was one of the few continental actresses both sexy and talented enough to handle demanding roles – sadly, The Mutations failed to provide her talents with a suitable vehicle. 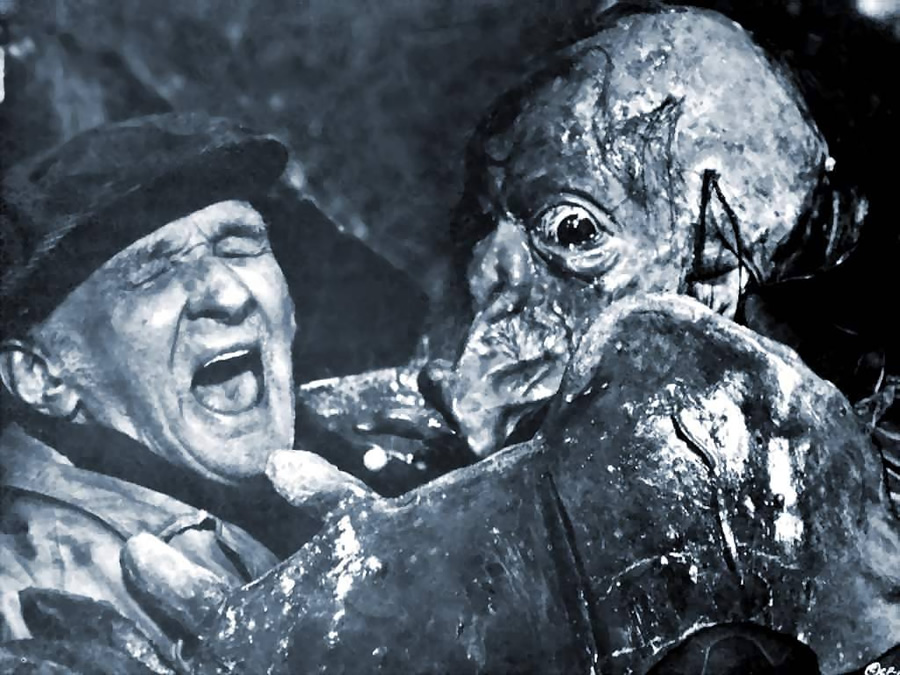 Visual effects from the film

Principal photography commenced on location (and on schedule) on the 13th of November, 1972. Throughout production, the film was known under the more singular title ‘The Mutation’, but it was pluralised during post-production. Julie Ege recalled her work on the film: “As time went by, it became increasingly difficult to read the film scripts that were offered to me. The Mutations starring Donald Pleasence certainly had an obscure plot. Donald humoursly asked me what a nice girl from Norway was doing in this business. We had a good time; Michael Dunn, the short actor, became a good friend. I have the fondest memories of him. All the side-show artists were very sympathetic people. My so-called scream queen film!” Despite her diplomacy, Julie Ege balked at scenes in the script which would have required her to lie topless on an operating table, and a body double (baring not even the remotest resemblence to Norway’s finest) was substituted.

The Mutations wrapped in mid-December, and with the protracted special effects photography, post production extended well into the spring of 1973. Jack Cardiff – even today – virtually disowns the film, claiming it was a lapse in judgement. It was to mark the end of his brief tenure as a director, and he returned to cinematography, photographing such diverse films as Death on the Nile, The Awakening, Amyteville 3D and Conan The Destroyer. Cardiff appears not to have been the only one to have seen The Mutations as a mistake – Columbia shelved it for nearly two years, before releasing it in 1974. 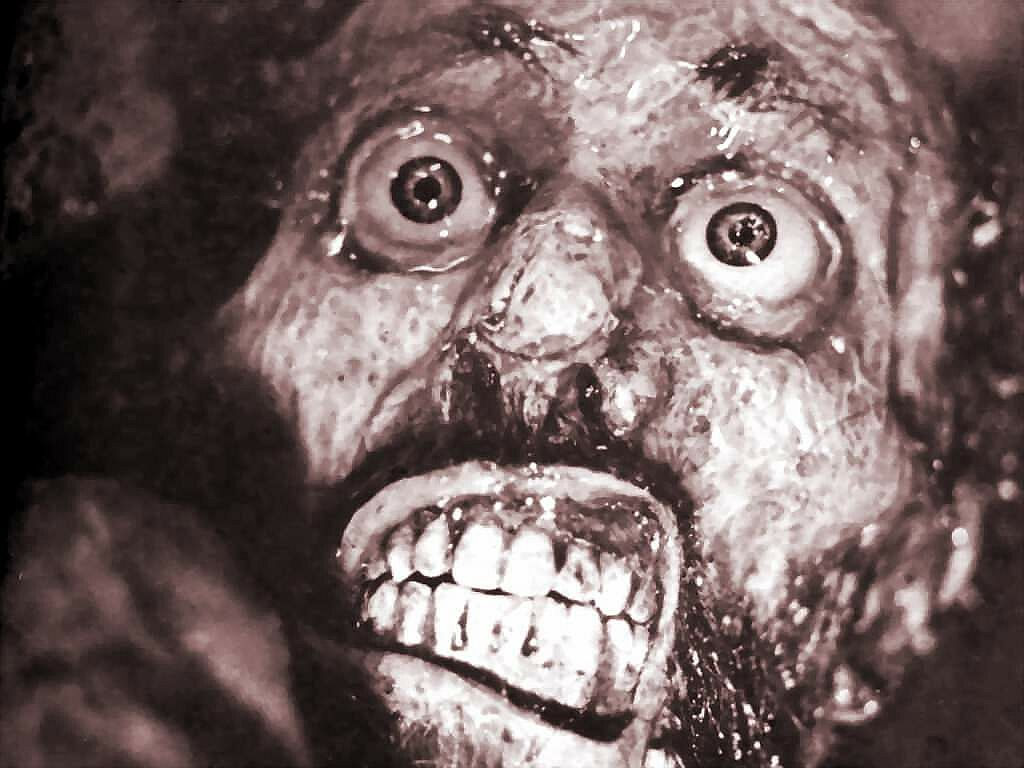 More visuals from the film

Cut briefly by the BBFC, The Mutations finally surfaced in mid-November 1974, as the top half of a double bill with The Chosen. Cinema + TV Today were unusually positive in their appraisal: “A weirdie… The imaginative care with which Jack Cardiff has created an atmosphere of baroque Grand Guignol is so marked as to be disconcerting… Not for the squeamish or the sensitive.” Despite similarly positive reviews – and a glut of stills showing Tom Baker in a similar garb to that which he appeared wearing in Dr. Who, The Mutations was an unmitigated commercial disaster – taking just £894 in it’s first week. After a month in the West end, the package had scraped together just £2,559 – which would barely have been acceptable as an opening week gross. In America, the film had a less disastrous run, but hoary old publicity tricks such as blacked-out stills hardly induced the kind of receipts The Exorcist was enjoying. 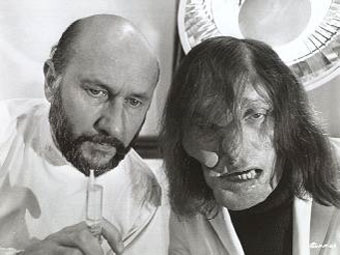 Though predictable in the extreme, and hampered by one of Donald Pleasence’s few autopilot performances of the period, The Mutations remains as disturbing and effective today as it was 25 years ago. On the whole, the supporting performances range from the bland (Jill Haworth) to the insipid (Brad Harris), with only Tom Baker and Julie Ege emerging from the proceedings with their credibility intact. Ege makes a delightful heroine, and the horrors of the film are truly brought home when she is gobbled-up by a monstrous mutated plant. Tom Baker achieves pathos under his heavy make up, particularly in his scene with a prostitute (Lisa Collings), whom he implores to say she loves him. Jack Cardiff’s direction is closer to slumming, disinterested professional than lucky hack, but remains well in the shadow of his work as a cinematographer. Weinbach and Alcocer’s script deals out cliche after cliche, yet still manages – on occasion – to shock and surprise with it’s grusome murders and tormented characters. The film looks forward to the eighties’ embracement of acceptable freaks (viz Mutronics, Robocop and Teenage Mutant Ninja Turtles) but takes itself far too seriously to manage any of the enduring success of Horror Hospital. Nonetheless, it remains a haunting film, with superb photography and art directions, and a curiously compelling experience.